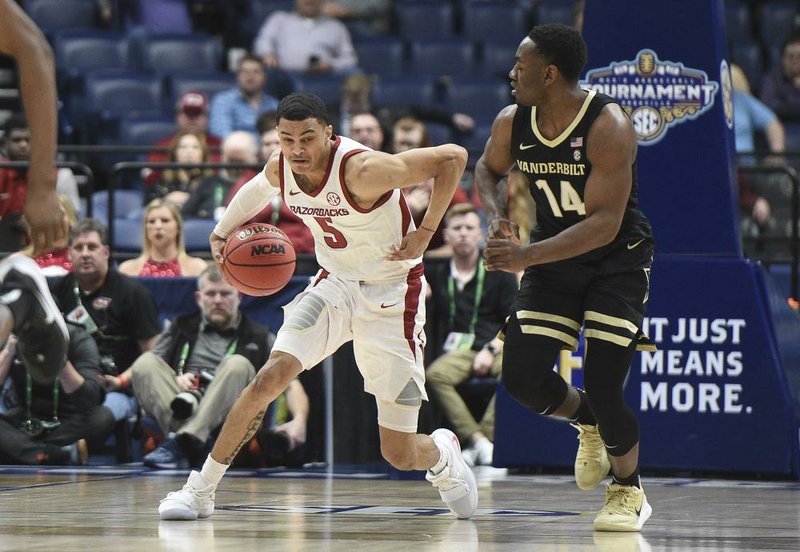 Guard Jalen Harris, who averaged 4.2 points, 2.4 assists and 2.1 rebounds as a junior for Arkansas this season, announced Tuesday that he would enter the transfer portal and not return for the Razorbacks next season. (NWA Democrat-Gazette/Charlie Kaijo) - Photo by Charlie Kaijo

FAYETTEVILLE -- Jalen Harris will play his final season of college basketball somewhere other than the University of Arkansas.

Harris, a 6-2 guard from Wilson, N.C., who played primarily off the bench for the Razorbacks this season, posted Tuesday on his Twitter account that he's entering the transfer portal.

As a senior graduate transfer, Harris will have immediate eligibility at his new school.

"Jalen's a good kid, and he played hard, he practiced hard," Arkansas Coach Eric Musselman said. "We just want to thank him for all of his effort. He was a great teammate, and he was really coachable.

"We wish him nothing but the best. Any way that we can help him, now and in the future, we want to do that for him."

The departure of Harris means Arkansas has a scholarship available for next season's team. 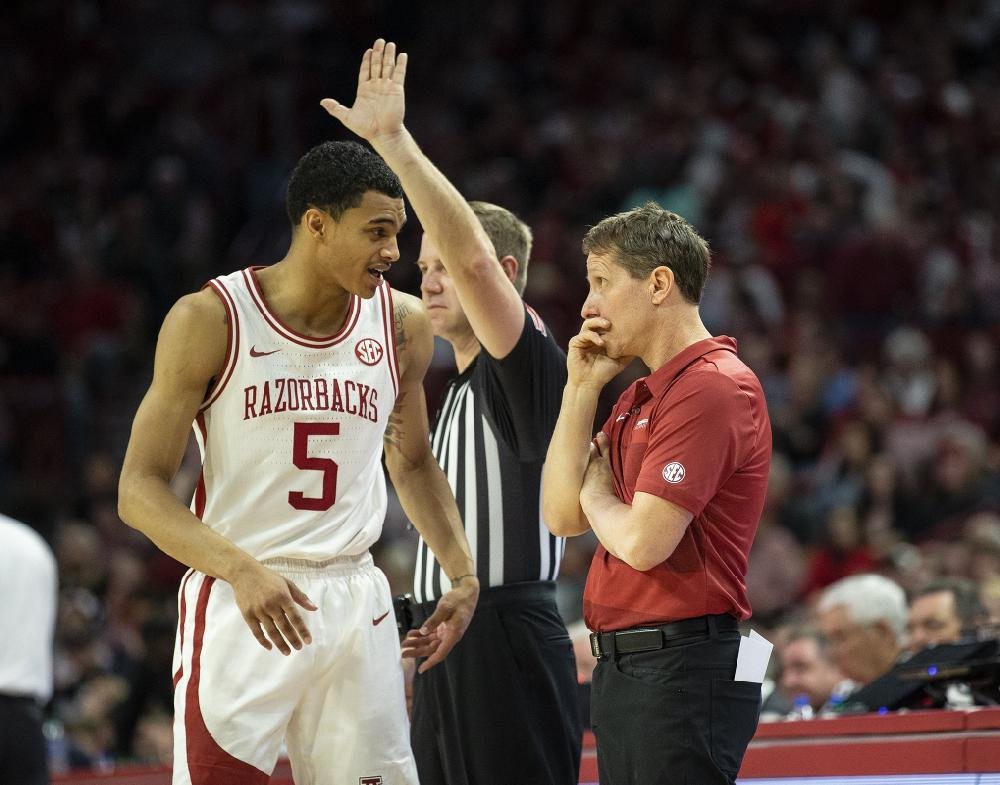 Guard Jalen Harris played two seasons at Arkansas after transferring from New Mexico and red- shirting his rst year with the Razorbacks, but he decided Tuesday to enter the transfer portal as a graduate transfer. (Special to the NWA Democrat-Gazette/David Beach)

"The plan is for us to continue to monitor the transfer market and see if there's a guy that's either a sit-out player or a grad transfer that makes sense and would fit into our system," Musselman said.

Harris played two seasons at Arkansas after transferring from New Mexico and redshirting his first year with the Razorbacks.

"These past 3 years as an Arkansas Razorback have been the best years of my life," Harris said in his tweet. "Thank you to my teammates who have supported me along the way. A special thank you to the coaches for believing in me and pushing me to get better each day.

"Playing in the Bud is something that I'll cherish forever."

Harris saw his playing decrease this season after he started all 34 games as a sophomore and averaged 7.6 points, 5.6 assists sand 2.9 rebounds in 30.8 minutes.

Harris' final game with the Razorbacks was one of his better performances this season. He started and had 7 points, 5 assists and 1 steal in 31 minutes in Arkansas' 86-73 victory over Vanderbilt in the SEC Tournament.

The Razorbacks' top two scorers -- guards Mason Jones and Isaiah Joe -- could enter the NBA Draft and decide to pursue a pro career. They also could enter the draft, not sign with an agent and withdraw and return to Arkansas next season.

Even if Jones and Joe decide to leave, it's likely Harris would have seen his playing time decrease again next season. Guard Desi Sills is returning, guard JD Notae -- a transfer from Jacksonville -- will be eligible to play after redshirting this season and high school guards Davonte Davis, Moses Moody and KK Robinson are joining the Razorbacks.

Harris scored a season-high 11 points in Arkansas' 82-78 victory at Alabama and had 7 points, 6 assists and 4 rebounds when the Razorbacks beat TCU 78-67.

Harris had career-highs last season of 17 points at South Carolina, 12 assists at Colorado State and 9 rebounds against Florida International. He had a career-high four steals this season against Montana.

Harris' 189 assists as a sophomore rank seventh on the Razorbacks' single-season list.

Last season, Harris scored on a driving basket with 5.9 seconds left to lift Arkansas to a 74-73 victory over Ole Miss.