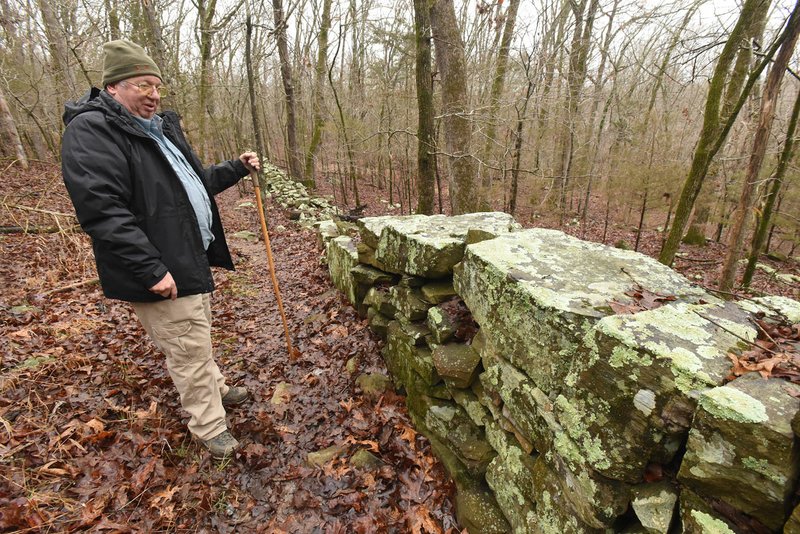 Mike McBride of Winslow hikes February 2020 along a long wall of stacked rock that runs parallel to the Rookery Trail at Lake Sequoyah in Fayetteville. The path offers a scenic hike of about 4 miles along the lake, across meadows and through woods. (NWA Democrat-Gazette/Flip Putthoff)

The nuggets of rock that make up a stone wall along the Rookery Trail at Lake Sequoyah in Fayetteville aren't gold. In the world of nuggets, some of these stacked field stones are massive, the size of shopping carts and weighing several hundred pounds.

The Rookery Trail and Kingfisher Trail offer pleasant hiking at Lake Sequoyah in Fayetteville. To reach the lake, go to the intersection of Arkansas 265 and Arkansas 16. Drive east on Arkansas 16 about 4 miles to a sign that points to the lake, then turn left. The address is 6608 Lake Sequoyah Drive.

Kingfisher Trail extends north from the lake office for 1.9 miles along the east shoreline. The hike offers stunning views of the lake and countryside.

Rookery Trail starts at a trailhead across the road from the lake office and boat ramp. It runs mostly south for about 2 miles. The path leads to the stacked rock wall for an out and back hike of 4 miles.

A couple of miles into a 4-mile out and back hike, explorers come to this curious rock wall that runs for maybe 200 yards beside the trail. Most of the wall averages 4 feet tall. Parts of it have toppled. These stones look like scattered gray dice tossed by the hand of a giant.

This "Great Wall of Arkansas," as it's been called, is a wondrous finale to a hike that starts across the road from the lake office and boat ramp. There's a parking area and an information kiosk at the trailhead near the lake.

From here, the path starts off to the left with picture-worthy views of Lake Sequoyah. Hikers soon come to a turnstile-type gate designed to keep cattle in a pasture that the trail soon crosses.

A landowner has an agreement with the city that allows him to keep cattle there, said Mike McBride of Winslow. McBride ran the Lake Sequoyah office and bait shop for years. He grew up near the lake.

McBride served as tour guide last winter on a Rookery Trail trek that led to the stacked-rock wall.

The trail leads down a gentle grade, taking hikers to the wide-open pasture. Posts with blue blazes show hikers the way across the field. Then there's more forest.

"Parts of the trail are muddy, even when it's been dry," McBride said, slogging through a wetland the day after it rained. The bog appeared as a miniature southeast Arkansas swamp only the trees were oak, not cypress. Hikers are advised to don waterproof footwear on the Rookery Trail.

Back in the woods, the route curves gently uphill. Views of the upper end of the lake unfold with each foot fall. McBride paused at his favorite Rookery Trail spot -- Jasper Slough.

"It's always been one of the places I've enjoyed going to," McBride said, gazing downhill at the rippled water. "It's so quiet here. You've got woods behind us and the lowland fields over there."

Jasper Slough is named after Jasper and Kenneth Lacey who lived in the area, McBride said. There's also a Lacey Slough nearby.

"There's every kind of wildlife. You can see deer, wild turkeys and there's a few bears," he said, basking in the trail's silence.

After more footsteps, a line of rock appears beside the trail. It's the start of the formidable wall of stacked rock that runs for a long way along the trail.

Hikers with some miles on their boots have seen stacked rock walls, or fences, hither and yon along the Ozarks' trails. History tells us that farmers made walls and fences out of the plentiful rock on their land.

Explorers would be hard pressed to find a wall with the girth this one has, with rocks so large.

The wall stokes McBride's curiosity on each visit. Why so large? Did it have something to do with the Civil War, perhaps built as protection from an advancing enemy? 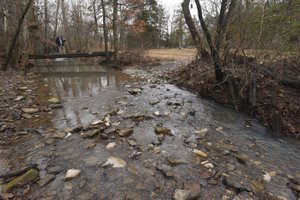 A foot bridge spans a creek February 2020 along the trail. (NWA Democrat-Gazette/Flip Putthoff)

Pictures of the wall sent to Marie Demeroukas at Shiloh Museum of Ozark History in Springdale piqued her curiosity, too. She got in touch with Alan Thompson, a Civil War historian who used to work at Prairie Grove Battlefield State Park. 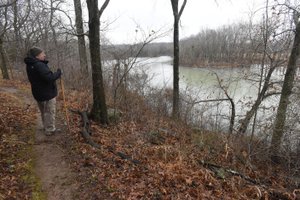 Views of Lake Sequoyah are part of the scenery along the Rookery Trail. Mike McBride takes in a vista at the start of the path. (NWA Democrat-Gazette/Flip Putthoff)

"I've never run across anything about walls in the area being built for defensive purposes" he told Demeroukas. "Not saying it wasn't done, but I've never seen evidence of it. That seems to be an odd place for something like that as well. If I was betting money, I'd say it was just some farmer clearing his field."

Charlie Alison, historian and author of "A Brief History of Fayetteville," also leans toward the farmer's wall theory.

Troops moved quickly through the area during the Civil War, he said, and likely wouldn't have built such a wall. 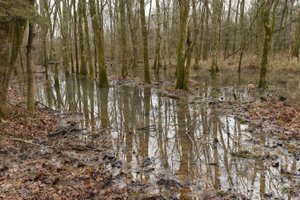 Demeroukas added that using big stones might have been an advantage toward making a sturdier wall that would need less repair than a wall made of smaller stones.

She's talked with country folk who have lived in the area a long time and know about stacked-rock walls.

"They say people sent the kids out in the evening to work on the wall so the adults could have the cabin to themselves for awhile," Demeroukas added.