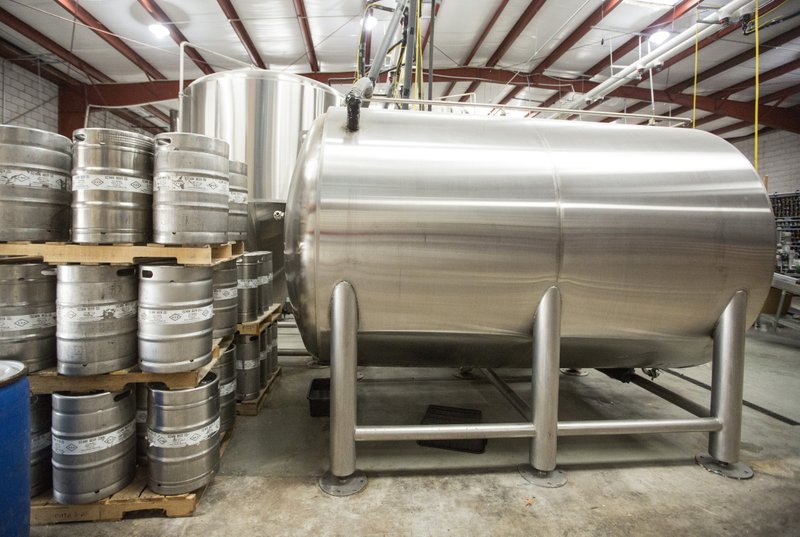 A new 80 barrel lager tank at Ozark Beer Company in downtown Rogers on Wednesday, March 4, 2020. The company laid off all 15 of its employees on Tuesday. (NWA Democrat-Gazette file photo/Ben Goff)

Rogers-based Ozark Beer Company has laid off its employees but intends to keep selling its canned products as its owners continue working without pay.

Co-owner Laci Bray said in an interview Tuesday afternoon the decision was heartbreaking but it was necessary with all the economic uncertainty resulting from the coronavirus outbreak. She said about 75% of the beer company’s revenue comes from its own taproom and the beer it sells to restaurants and bars, which are mostly shut down currently.

She said the move was necessary so that the company would be viable to restart operations when the grip the coronavirus has on the economy loosens.

She said the company laid off 15 workers, most of them full-time and that she and her husband and co-owner Andy Coates will work to keep up with drive-up orders and to can product for retail sales.

“We are still here,” she said.

The company broke the news Tuesday afternoon on its Facebook page. The post had garnered nearly 700 reactions, more than 100 comments and over 130 shares as of a little after 2 p.m.

Sylvia Blain, executive director of the Arkansas Brewers Guild, said in an email Tuesday many of the state’s 40 breweries have furloughed employees. She said those that can, even rural operations, are offering beer pick up and even delivery as they try to stay afloat.

Ozark Beer first began production in 2013 in Rogers, moving to its current location which serves as a production facility and taproom in downtown Rogers in 2017. The company is owned by Bray, Coates and Jefferson Baldwin.

In 2018, the state’s top five craft-beer makers accounted for 27,686 barrels, or 73% of the state’s total beer production, according to documents from the Alcoholic Beverage Control Division of the Arkansas Department of Finance and Administration. Little Rock’s Lost Forty Brewery produced the lion’s share with 14,250 barrels, or nearly 40% of the state’s total. Springdale’s Core ranked second with 4,800 barrels and Ozark Beer ranked third with 4,077 barrels.

In 2018, the Brewers Association, a trade association for craft brewers, estimated Arkansas’ breweries had an economic impact valued at $838 million, ranking 26th nationally.