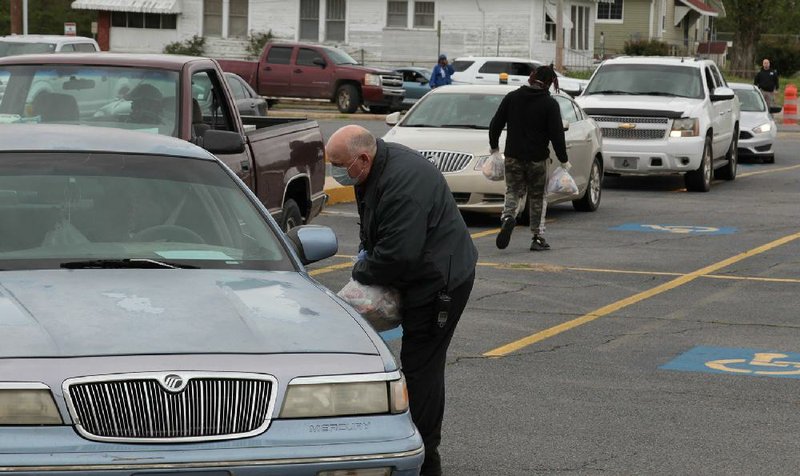 PINE BLUFF -- When word spread that Tyson Foods would be delivering 40,000 pounds of chicken to hand out because of the coronavirus pandemic, hundreds of people showed up.

They came from all over the state -- not just Pine Bluff and Jefferson County.

The line of cars started forming by 6 a.m. Monday to await the scheduled 10 a.m. arrival of the delivery truck, which was coming from Russellville.

Then, about 11:15 a.m., volunteers, Pine Bluff police, and Jefferson County deputies directing traffic began to send people away, telling them to return in the afternoon, after organizers received word that the truck would be delayed until then.

They came back. And once the truck arrived, shortly after 1 p.m., volunteers swung into action unloading the truck and sorting cases of chicken products, sorting the variety of products into 10-pound bags, and fanning out through the lines of vehicles that had already lined back up, bumper to bumper for blocks on end.

As pallets of chicken were unloaded by forklift from the truck under the watchful eye of the Tyson Foods driver, Bill Hall of Little Italy, he said that he has gone on numerous food donation runs during his time driving for Tyson.

"They do these all over and they have for years," Hall said. "I've delivered to food banks all over the country."

Once the pallets were unloaded, Ross supervised the bagging operation closely, making sure that each 10-pound bag had a selection of products, from pre-cooked chicken strips in several flavors, pre-cooked popcorn chicken, buffalo-style chicken wings, uncooked leg quarters, and other selections.

"We want to make sure everyone gets a variety," said Jacqueline Ross, director of Delta Regional Community Services Outreach Network in Pine Bluff, which helped organize the food distribution event. "We try to make sure we don't put 10 pounds of the same thing in a bag."

Just after 2 p.m., police and sheriff's deputies began routing vehicles lined up for blocks in every direction into organized queues to move them all toward the parking lot. As the first vehicles pulled into the lot, volunteers began walking out to the arrivals, laden with bags of chicken, one 10-pound bag for each family represented.

With the demeanor of someone accustomed to organizing large groups of people, Ross began calling out directions to volunteers and new arrivals.

"Let's get these cars tightened up," she called to a group of volunteers. "Have them pull all the way up to the building and circle around. We've got 500 cars waiting out there, so let's get the line moving."

After a few fits and starts, a process resembling an assembly line began to take shape and the line began moving.

As cars moved into the parking lot, Mary Liddell greeted each family with a smile and a wave, directing them to pull up behind the next car in front of them and urging them to help keep the line moving. She handed each one a flyer with information about the U.S. Census 2020 count, which is underway.

"This is important that people are counted," said Liddell, outreach coordinator for the city of Pine Bluff. "We may be in the middle of a crisis, but we've got to do this to get the funding we should have. We've got to get everyone counted."

After the event concluded, at about 7:15 p.m., Liddell said she did not have an exact count of how many people received food, saying that the Delta Network board of directors would determine a final count sometime today. But, she said, she was able to put together a rough estimate.

"I handed out about 600 Census flyers to the cars as they came in the parking lot," she said. "We had a lot of cars that came through before I got the flyers to give out. And I know that at 5 o'clock, they said we still had cars backed up down Eighth [Street] and all the way to the Sunbeam girl sign on Harding" -- a distance of approximately one mile.

"That is equivalent to about 16 million meals," Burleson said, noting that most of the food is distributed through the Feeding America Food Bank Network or through community food pantries in communities that Tyson Foods serves.

"Typically, a truckload donation event is usually a special circumstance," he said. "Historically, it's usually around disaster relief or the kind of circumstance in which we currently find ourselves."

"Hunger relief is the primary way we give back to our communities," he said. 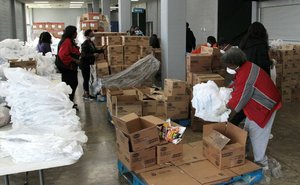