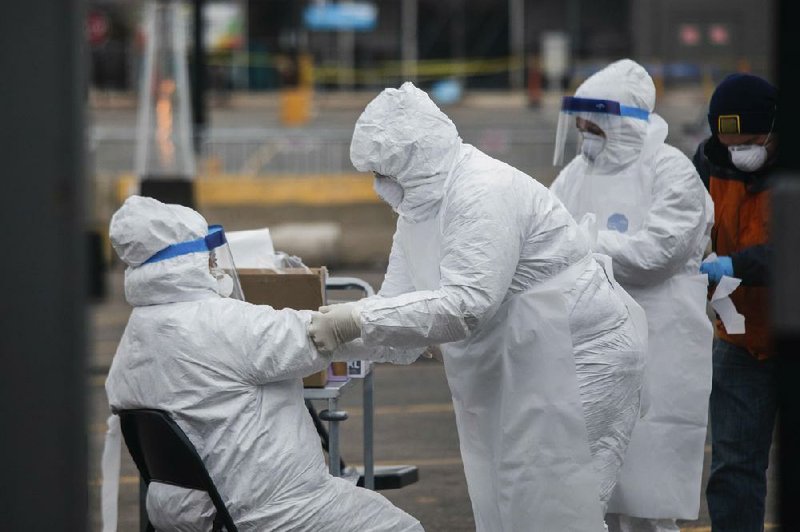 Medical workers help each other with their suits on Sunday at a drive-thru testing site in the parking lot of a Walmart store in Northlake, Ill. (Chicago Sun-Times/Pat Nabong)

Walmart Inc. opened two federal covid-19 drive-thru testing sites Sunday in Walmart parking lots in Illinois to test first responders and health care workers who may have been exposed to the virus, the retailer said in a blog post.

These first pilot sites, in the Chicago-area cities of Northlake and Joliet, can administer up to 150 tests a day, the company said. The sites are not able to conduct tests for the general public at this time, the company said, and testing is not available in Walmart stores.

The Bentonville-based retailer is joining CVS Health, Walgreens Boots Alliance Inc. and Target Corp. in setting up similar testing sites. CVS opened its first model testing site Thursday in Massachusetts, but solely for first responders who are referred for the tests by government or public health officials.

All four companies said in a March 13 meeting with President Donald Trump that they would make portions of their store parking lots available for coronavirus testing.

Walmart President and Chief Executive Officer Doug McMillon said at the Rose Garden event that the company "will stay involved and do everything we can from a supply chain point of view to be of assistance."

Walgreens said in a news release Sunday that it had opened its first drive-thru testing site, also in the Chicago area and only for first responders and health care workers. However, the drugstore chain said it plans to expand testing to those older than 65 or with existing health concerns "over the coming days."

Target said on its website Monday that it "is currently working with officials and task force partners to identify select Target real estate that can serve as temporary testing locations," among other details.

Del Sloneker, chief operating officer for Walmart U.S. health and wellness, said in the blog post that Walmart's testing sites are staffed by workers from the U.S. Department of Health and Human Services as well as the retailer's own pharmacists who have volunteered to help.

Sloneker said Walmart consulted with public health officials to ensure the safety of both its volunteers and the people coming for testing. Volunteers are equipped with the proper protective gear, he said, and patients must stay in their cars at all times.

The testing involves collecting swabs from patients, a Walmart spokesman said Monday. The samples will then be sent to a lab for analysis.

This is different from screening, the spokesman said, which is used to determine whether people should be tested.

Sloneker said the pilot sites will help prepare the retailer to add more testing locations. Walmart has more than 3,500 supercenters across the U.S.

"Our pharmacists and other health professionals stand ready to train others and administer the testing to help scale as quickly as possible in the areas that are hardest hit," Sloneker said. "We know testing is important, and we are in active conversations with state officials to see where we can add the most value."