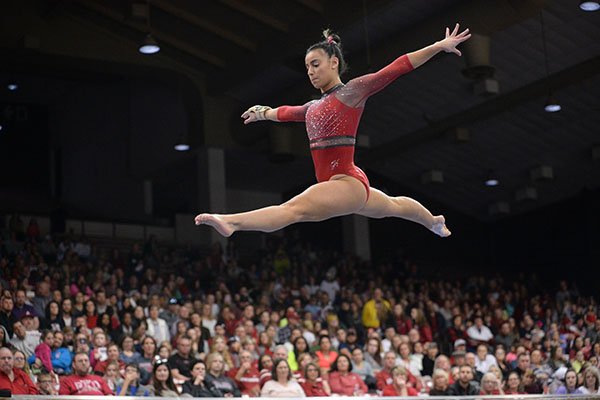 Arkansas' Sophia Carter competes Friday, Feb. 7, 2020, in the beam portion of the Razorbacks' meet with Georgia in Barnhill Arena in Fayetteville. - Photo by Andy Shupe

FAYETTEVILLE — University of Arkansas gymnasts Sophia Carter and Kennedy Hambrick were named as second-team All-Americans by the Women’s Collegiate Gymnastics Association on Tuesday based on their regular-season performances.

Hambrick, a sophomore from Pearland, Texas, was a selection as an all-arounder as the Razorbacks’ most consistent gymnast in 2020 for first-year Coach Jordyn Wieber. Carter, a junior from Blue Springs Mo., was chosen on the floor exercise, her signature event.

Carter, a second-time All-American choice, had a national qualifying score of 9.925 on the floor to rank 11th nationally. She joined Katherine Grable and Amanda Wellick as the only Razorbacks to earn regular season All-America honors in multiple years.

Hambrick had a national qualifying score of 39.385 on the all around to rank 16th in the country. She is the second Arkansas gymnast named a regular season All-American in the all-around, joining Grable (2014).

Hambrick, who has competed in the all-around in every meet during her college career, hit career highs on every event this winter, including a 39.6 to claim the all-around title against No. 10 Georgia. She won 11 event titles this season.

Hambrick and Carter were among the 16 SEC gymnasts to receive All-America honors.