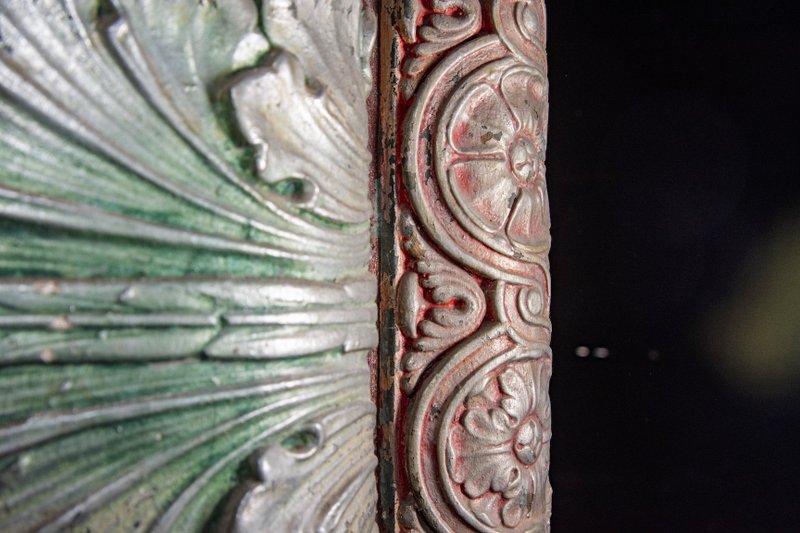 A detail of the plaster work surrounding the proscenium of the Saenger Theater. (Arkansas Democrat-Gazette/Cary Jenkins)

This is the seventh part of a series on the seven structures Preserve Arkansas spotlighted in its 2019 list of the state's most endangered historic places. See earlier articles here.

PINE BLUFF — In 1924, an elaborately decorated motion picture palace opened downtown on the corner of Second Avenue and Pine Street — The Saenger Theater.

It was designed not only to show movies but also as a stage equipped for live performances and roadshows. It was a sight to see and a place to see and be seen.

But the last few years have not been kind to the building, once called the Showplace of the South.

At one time, theatergoers would enter a lobby with a checkered Italian marble floor and elaborate plasterwork lighted by a chandelier. Throughout the theater, other elaborate chandeliers cast an elegant glow, hanging from a ceiling decorated with plaster medallions.

An intricate plaster frieze of Roman chariots still tops the proscenium arch. Decorative plaster also outlines the stage opening and large arches on each side of the stage where patrons once watched the show from box seats. The front of the balcony and the ceiling over the balcony were all also richly decorated with ornamental plaster.

The theater, which was listed on the National Register of Historic Places in 1995, was placed on Preserve Arkansas' list of Arkansas' Most Endangered Places in 2019, one of the year's Seven to Save.

The theater closed in 1975, and according to a news release from Preserve Arkansas, the building was last used by The Pine Bluff Film Festival, which started in 1995 and continued until about 2008, when fundraising efforts were no longer enough to keep the doors open.

In 2012, Old Town Theatres Inc., a nonprofit that was trying to save the building, donated the Saenger to the city of Pine Bluff.

The building remains beautiful, inside and out. Reliefs of decorative urns on each side of the stage echo relief stone urns on the front of the theater. The building is brick with Classical/Colonial revival style elements.

Originally, French doors would have opened into the lobby, but they were replaced in the late 1920s with Art Deco style doors.

The second story features three tall arches with windows that swing open and with a stone balustrade across the bottom. The tops of the arches are painted with designs including angels and musical instruments. Farther up, centering the facade, a laughing face howls between two strands of a fruit garland.

The roof leaks, chunks of decorative plaster are missing, ceilings are falling and graffiti defaces the walls. During a visit this winter, Kathleen Majewska found windows open and a side door insecure. The Saenger was open to trespassers.

Majewska has long been an advocate and guardian of the theater as part of Old Town, which worked to save and rehabilitate the theater before the group donated it to the city.

"I have seen movie stars, business persons, restoration groups and politicians all come and go for various reasons," she says, frustrated about the difficulty finding lasting support for the restoration of the theater. "We are fighting against time to stop vandals, water leaks and structural decay.

"We need lovers of theater and people who value the history of the great stars who walked its boards."

The 1,500 seat theater attracted people from all over southeast Arkansas to see famous acts including the Ziegfeld Follies, Harry Houdini, Roy Rogers and Trigger, Will Rogers and Douglas Fairbanks Jr.

The Saenger was patterned after the great free-standing European palace theaters, she says, "with its grand organ chamber, orchestra pit and horseshoe-shaped balcony. It's a priceless beauty that should be restored."

A renovated and operational Saenger "would open up a world of possibilities for Pine Bluff," Majewska says. "Our beautiful theater, once restored, will help revitalize downtown and be a magnet for tourists."

Print Headline: PHOTOS: Once glorious Showplace of the South, an Arkansas gem, at risk of ruin