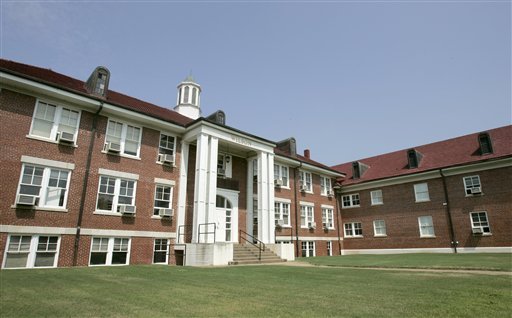 Wilson Hall is shown on the Arkansas Tech University campus in Russellville in this July 2007 file photo. - Photo by AP / Danny Johnston

Students leaving Arkansas Tech University residences set to close April 3 will receive a credit toward future university housing to be applied over the next 12 months, the school's board of trustees decided Sunday.

The five-person board unanimously approved the credits -- to be pro-rated based on check-out date -- and also pro-rated housing refunds for seniors. Similar credits and refunds will be given for campus meal plans. Credits may also be applied immediately if students already have a remaining account balance.

The board vote turned around what Robin Bowen, the university's president, had said Saturday was an "initial" decision to not offer refunds. With the dorms closing because of the covid-19 outbreak, Bowen on Saturday had cited "a no refunds due to emergencies clause" in student housing contracts as well as a need to ensure the university's "financial stability."

The Russellville campus enrolled about 9,700 students this past fall and at one time had a spring campus housing population of 2,152 students -- though many have already left -- according to the university.

Board documents presented to trustees estimated that about $1.2 million would be paid in housing refunds and credits to 1,505 students. The estimated total of students getting reimbursed includes 139 seniors, about 6% of the spring housing population, according to board documents.

A semester of Arkansas Tech housing costs an estimated $2,260 and on-campus meals roughly $1,875, according to the school's website.

The board separately voted to approve a similar measure for campus meal plans. The university estimates that about $790,000 in meal plan refunds and credits would be paid to 1,564 students. Some commuter students have a campus meal plan.

Campus housing will remain open past the April 3 deadline for some, and those students will not receive reimbursements, the university said in a statement after the vote. "Special circumstances" for remaining on campus include "personal safety, access to internet, no other available housing, academic distress or other legitimate reasons," the university previously announced.

Bernadette Hinkle, Arkansas Tech's vice president for administration and finance, said Sunday during the meeting that staff estimated about 640 students might remain on campus.

Like other colleges in the state, Arkansas Tech has moved to remote instruction for its classes. The spring semester runs through May 5.

"It is our hope that these solutions will remove one concern from the minds of students and their families," Bowen said in a statement Sunday. She added: "Please know that we know these policies will impact the finances of the university this year and next, but we believe this is the right thing to do."

The university's Russellville campus has a 2019-20 budget of about $10.3 million in student housing revenue and about $7.4 million in food service revenue, according to documents published by the state Division of Higher Education.

Among the state's largest public universities, only Arkansas Tech had publicly signaled an intention of not giving reimbursements for housing costs associated with early residence closures.

More than 1,300 Arkansas Tech students had signed an online petition as of Saturday afternoon asking for a partial refund.

Lauryn Doublet, a junior who started the petition, said in a written message Sunday that she is "excited that they came to the decision" because "it is the only right/fair thing to do."

Jennifer Mosier, the parent of an Arkansas Tech junior, Alexandria Cisco, said in an email that her daughter is a resident assistant in campus housing and "has been told she will get her remaining salary from her RA position through May."

"I am happy with the decisions and think this is fair," Mosier said of the reimbursements.

The university will have an appeal process available, as some board members expressed concern that students may not return to school for economic reasons.

Jim Smith, a board member, said that given the anticipated rise in unemployment tied to the covid-19 outbreak, "we've got to expect" that some students "just aren't going to be able to go back to school."

Hinkle said an appeal committee would consider students' "extenuating circumstances" should they not re-enroll in the fall, and possibly "would find favor with them and refund their amount."