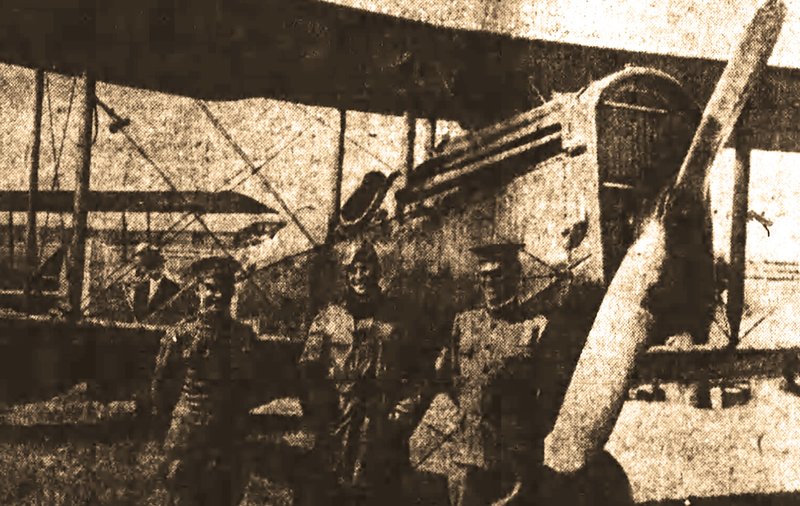 In this detail of a photo from the March 24, 1920, Arkansas Gazette, Lt. Belvin Maynard (center) poses with Lt. Edward Wolfe (left) and Lt. Col. C.A. Mitchell of the Little Rock Army recruiting office at a landing field in North Little Rock. (Arkansas Democrat-Gazette)

This was one of many underappreciated tasks performed repeatedly by the historical headline writers of the Arkansas Gazette — a job requiring no small skill and likely done in a rush.

Before we judge this a lazy headline, we should know the writer had one line to work with, only one column wide. This small item reported that agents from the office of the state banking examiner had finished going over the books of the shuttered Bank of Blytheville and, having (reportedly) shared their report with the bank's board of directors, left town on the night train. The examiner would file the report in Chancery Court and then, it was expected, "steps would be taken" to start to set the bank right.

For every "Official to File Report" those old headline writers could also produce, in a hurry, three or four or 15 other equally drab, functional headlines. How about "State Clothiers to Hold Meeting," "Chicago Cops Ask Raise," "Smelters Earn Less" — all of which also appeared on that long-ago Page 3.

"Smelters Earn Less" is no "Hindenburg May Be Out of Race" but it beats the pants off "Weekly Review of the Cotton Trade," which appeared on Page 4. If Page 3 was handled by one editor and Page 4 by another, Page 3 was your man for snappy headlines.

But the editing staff also took some risks with ambitious or downright dazzling wordplay. As subscribers unfolded their paper March 22, this stopper would have pinned them to Page 1:

It topped a nifty but oddly placed wire-service article from New York, and the subhead, as was the norm, added value: "Takes a Long Chance and Draws Out for $12,000 Pot, but Suspicious Loser Holds Out Pack of Readers and Squeals on Game."

Stud poker was the game. A sharp named "Last Card Louie" Kronberg was on trial for dishonest gambling. (Later the charge would be dismissed.)

Having lost $3,500 at Louie's table, J.M. Silverman, manufacturer of women's dresses, had collected the deck when the game broke up at 5 a.m. He took it to police detectives, who agreed that those cards were marked. They were "readers."

One hand had made Silverman suspicious. He and all the other guys had dropped out except Louie Kronberg and a man named Mr. Louis. As "Louie" faced Louis, each had one card face down — in the hole. Face up, Kronberg had a 3, a 4 and a one; Louis had an ace, a 9 and a jack. Kronberg bet $1,200; Louis raised him $4,500.

Silverman testified: "Louis then turned over an ace in the hole ... and said, 'I've got you beat, as you can't have better than two nines; I will split the pot 25 percent to the loser and 75 percent to the winner."

Kronberg refused. Louis offered to let him take out his $4,500 before splitting the pot.

"Kronberg said, 'No, I'll take a chance,' and he reached to Bartie, who was dealing, and helped him pull the top card off the deck."

It was a 4, and Kronberg then turned over his hole card, a 3. Louis drew a 6. Kronberg's two pair beat Louis' pair of aces, "and he swooped in the pot." Swooped it in.

Google pulled up information for me that Kronberg's game usually included theater and movie types, including Irving Berlin. That story got a headline it deserved.

Here's another headline from the same Page 1:

And the subhead: "Father of Wayward Son Faces Toil in Life's Twilight."

A retired ad man in Chicago had been aged many years by a tragedy in which his son, Capt. Clifford Bleyer, was slain by Mrs. Ruth Randall, beautiful divorcee, after a party in her apartments. She then took her own life. Bleyer had been one of the best-known advertising executives of the Midwest. His will left his business to his dishonored wife and their two little girls.

The aged father would devote the rest of his life to maintaining the business for the benefit of the widow and her babes.

Some of the March 22 stories did not need spiffy headlines to rivet attention — and I'm not just talking about "Mother to Identify Body" on Page 3. Local news was perky:

Lt. Belvin W. Maynard, "The Flying Parson," was supposedly wending through the zephyrs toward Little Rock, accompanied by his German police dog and his "mechanician." His visit was to benefit U.S. Army recruiting because Congress had made the aerial combat service a permanent part of the Army. To fly for your country, you applied to join the U.S. Army Air Service.

Mechanicianing was one of the Army's most important occupations ... Naw, just kidding. It was a typo. And now would be as good a time as any to mention that, for all the good work they did, the editorial staff that day accidentally put "March 22, 1919," under the nameplate on the front page. Mondays are hard. 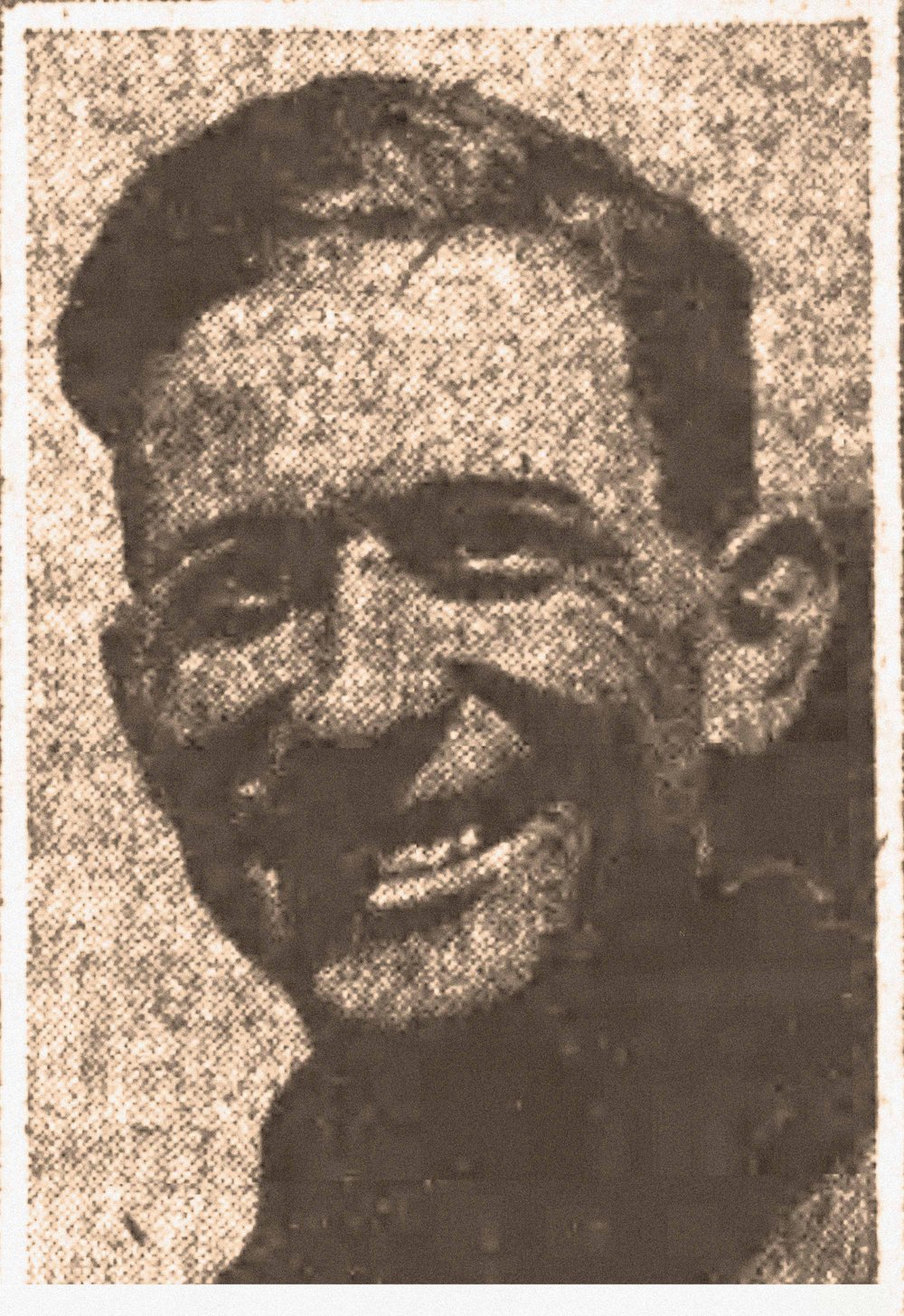 R.A. Underhill of the Little Rock Aerial Company expected to meet Maynard in the air and escort him to the landing field near the Cotton Belt railroad shops of North Little Rock. Afterward, he would attend a banquet and then speak at the Palace theater.

Maynard was the first test pilot of the American Expeditionary Forces and held a world record for the largest number of consecutive loops ever made in a plane. He also placed second in a cross country race from San Francisco to New York.

But he didn't make it to town March 22. He stopped instead at Baton Rouge, La., for some mechanicianing, but he arrived the next day, ate at the banquet, made his pitch, gave a local aviation booster a thrilling aerial spin around the state Capitol and then departed with his dog and mechanic.

◼️ Person on Wire Was Evidently Quite Excited: A caller sent the fire department to the wrong part of town while another place burned.

◼️ City Life Too Strenuous for These Animals: A police detective ran over a rabbit. Seriously.

◼️ Preacher to Seek Toga: At Texarkana, the Rev. J.B. Turrentine was urged by Sam Morris, cousin of Sen. Morris Sheppard, to run for Congress.

◼️ Dry Law Writer Knows Everyone Cusses Him Out:

An irate, thoughtfully unnamed citizen had rushed into the office of Rep. Andrew Volstead of Minnesota, author of the Volstead Act, brandishing a bottle. He had accidentally paid $22 for tea. Volstead said, "Don't blame me. I'm not a dry, and never was. Somebody had to write the law and, as chairman of the committee, it fell to me. It might have been worse. Now I am cussed from one end of the country to the other."

Later, he explained that he did not mean he was opposed to Prohibition, but that he was not a prohibitionist, in the strict sense of the word.

Headlines can be telling, but they never tell the whole story.