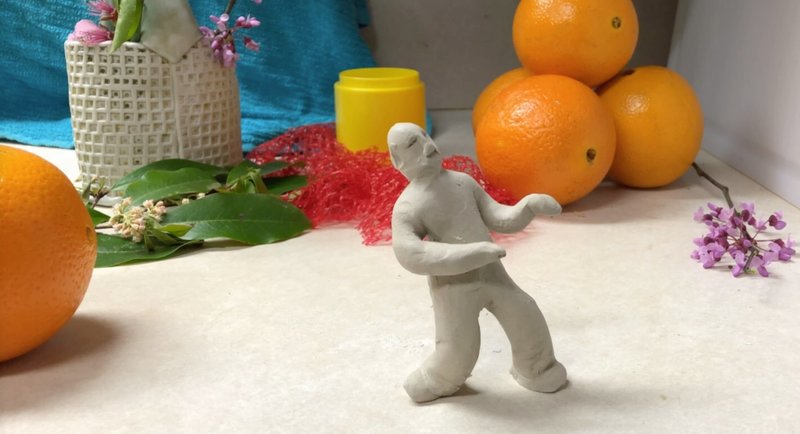 Pinky and some oranges and twigs demonstrate hula dancing, or imagine that they do. (Arkansas Democrat-Gazette/Celia Storey)

When you think of a hula dancer, what do you picture? A female dancer, most likely young. Long, flowing hair, a warm, inviting smile and softly swaying hips. But when I started dancing hula, nearly 15 years ago, I was lacking in all of these characteristics, except perhaps the smile. As a skinny, 40-something white male with short hair, let's just say I stood out from the crowd.

On our 10th-anniversary trip to Hawaii, my wife and I had watched Polynesian dances at a luau. We enjoyed the Samoan dance, which was terrifying, and the poi ball dance, which was quite acrobatic. By comparison, hula looked easy. I thought, "I could do that."

I had been a folk dancer ever since college, and at the time I was very committed to Morris dancing, a flamboyant, extroverted English dance. But a few years later I felt the need to try something new, and I signed up for an introductory hula class at a recreation center in Santa Cruz, Calif. When I showed up for the first lesson, the instructor took me aside. "I don't think some of the other students would be comfortable with you in the class," she told me. Oh, I thought. Perhaps men aren't supposed to do hula. I apologized and departed.

About this, too, I was mistaken. Go to any hula competition and you will see breathtaking, athletic and expressive male dancers. Men have done hula since the beginning. Hula was simply a way of telling a story, and there's no reason that men can't do that. As a true folk tradition, hula embraces all ages and sexes.

But this knowledge was still in my future. Two more years passed before I gave hula another shot. I contacted the teacher of a group I found online and hesitantly asked if men were allowed.

"Of course! Why not?" she replied. There were two already.

For anyone who begins hula, male or female, the first challenge is to master eight basic steps. Kaholo is the default, a simple sideways two-step. In your mental picture of a hula dancer, you probably saw her doing a kaholo with her arms pointing to one side in "hula position."

Another step, called ka'o, is a stationary hip-swaying. 'Ami, a slow rotation of the hips in a circle, is the step most likely to draw hoots and cheers from an audience. Almost all of the other basic steps likewise involve the hips to some extent.

Looking at the wide hips of my hula sisters, I thought, this is ridiculous! Of course they can do a beautiful ka'o or 'ami, they have more to work with. But no one will be able to tell whether my microscopic man hips are swaying or not.

This, too, was complete nonsense. Hula is all about subtlety and smoothness. A motion does not have to be big to be effective; sometimes the smallest of gestures take the audience's breath away. A group of dancers, each doing a small and subtle ka'o, collectively form a beautiful wave, like grass in the wind or kelp in the ocean.

The real problem was mental. Men in our culture do not use their hips. When we walk, we keep the pelvis locked and vertical. If you Google "How to have a stereotypically feminine walk," you'll find that step one is to sway your hips. After a lifetime of not communicating with your hips, it's not so easy to figure out how to sway them for a ka'o or a kaholo.

My first attempts were clumsy. I remember my teacher, whom I will call by her title Kumu, looking at my kaholo with pursed lips and a quizzical expression but not saying anything. Then, about half a year after I started, she said to me with a big smile, "I figured it out! I figured out what you're doing wrong!"

I was thrusting my hips to the side at the same time that I stepped. Step left/thrust left. Step right/thrust right. It was perhaps a holdover from English dancing, where everything happens on the beat. Just get from point A to point B at the right time, and you'll be fine. But in hula, what happens between A and B matters, too. "The hips should follow the feet," Kumu told me. Step left, and then let a wave of motion travel up the body and pull your hips with it.

"Hips after feet" became my new koan. But a year after I started, I still had not figured out how to do it. Finally, I scheduled a private lesson with Kumu, at which we did nothing but go over the eight basic steps. I learned that I was doing seven of them wrong. It was a good lesson in humility. Maybe I was an experienced folk dancer, but hula dancing was hard. I had to relearn how to move my body.

Not long after that, one day in warm-ups, I discovered muscles in my side that I didn't know I had: most likely the external and internal abdominal obliques. These are the muscles that you use to do a side bend when your feet are anchored to the ground. But if you keep your torso upright and contract the obliques on one side, your hip on that side will have to come up. (To be more precise, your pelvis pivots about the lumbosacral joint, so that the left hip will go up and the right hip will go down.) This vertical motion, rather than side-to-side motion, unlocked the riddle for me. Kumu noticed, too, and before long she promoted me out of the beginners group.

It still amazes me that something I could understand in five minutes at a blackboard took me more than a year to figure out in my own body. But that moment of discovery, along with generally giving myself permission to talk to my hips, got me over the hump. Eventually, I learned that my difficulties were not unique. Every beginning hula dancer, male or female, takes some time to "discover their hips." In retrospect, I admired Kumu's patience in not saying anything, but just waiting for it to happen. To learn it, you've got to earn it.

More than a decade later, and now into my 60s, I'm still dancing hula. It's the most challenging kind of dance I've ever done, but the challenge is mostly mental. You have to understand the culture and the story you're telling, and you have to think about all the parts of your body at once: your feet, your hips, your arms, your hands, your gaze. But at the same time, physically, it's the ideal activity for an aging body, low-impact and stress-reducing, like tai chi or yoga but with better music.

And thank goodness, there's no one right body type. Aside from that very first experience, I have never felt anything but aloha from my hula sisters, and that more than anything else has kept me going.

Mathematician turned science writer Dana Mackenzie's most recent book is The Book of Why: The New Science of Cause and Effect.

Print Headline: Dancing the hula involves 'talking' with your hips