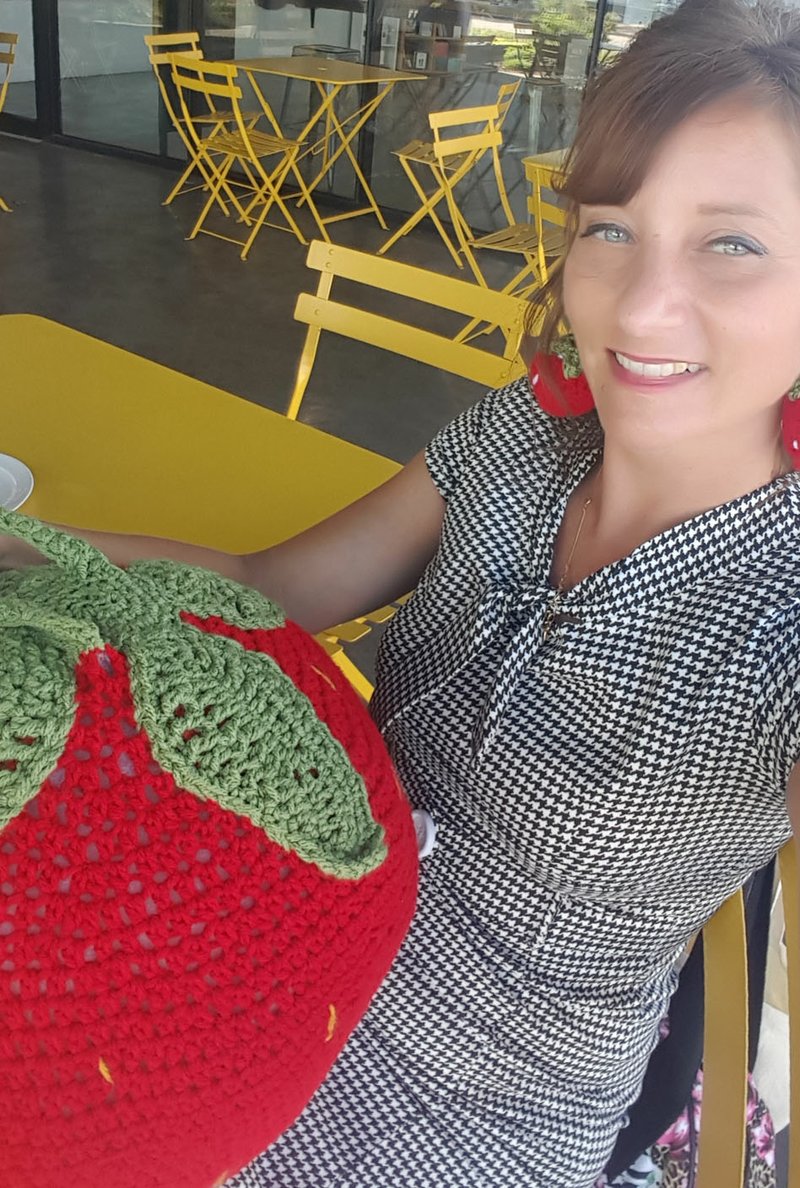 Gallina has created crocheted fruit, shoes, ballgowns, spiders, flowers, bees -- you name it, she's made it with yarn and crochet hooks. (Courtesy Photo)

Gina Gallina is a crocheting superstar.

If you think of crochet -- a craft where yarn is looped into different patterns using crochet hooks -- as a staid, conventional hobby that results in bland sweaters and unused scarves, one look at Gallina's projects over the years will set you straight pretty quickly. Among the things that she's crocheted are a giant strawberry (you might have seen it last year, swinging in front of the historic Walker-Stone House just off the Fayetteville square); an 8-foot-tall pineapple for a Chicago hotel; a huge banner featuring a delicious plate of bacon and eggs; a racy pair of red high heels; Las Vegas showgirl-style headdresses; and exquisitely detailed ball gowns. Then, this month, she crochet-bombed Maxine's, the popular Fayetteville bar on Block Avenue.

See Gina Gallina and Crochetitville’s work on the facade of Maxine’s Tap Room, 107 N. Block Ave., Fayetteville, from now until the end of March.

"I always thought it would be the perfect building to crochet-bomb," says Gallina who, in a phone interview, is as bright, cheery and whimsical as her colorful yarn art. "It's big, flat and square. When I suggested it, Hannah [Withers, who operates Maxine's with her husband, Ben Gitchel] didn't even flinch. I formed a group called 'Crochetitville,' and we all did it together to commemorate National Crochet Month and Maxine's 70th birthday."

Gallina says the group started work in November and installed the art on Feb. 29, where it will stay until the end of March. They used PVC pipe almost as curtain rods, and the panels are weighted at the top by cinder blocks and at the bottom with conduit pipes.

"I think if we do a second building, we'll do a better job, because we're learning a lot," says Gallina. At the beginning of the project, she gave her fellow crocheters a pattern and suggested they use acrylic yarn, which absorbs less water and dries more quickly than wool. Otherwise, the crochet artists were free to use whatever colors they wanted. The result is a riot of color and design that stops passersby in their tracks -- a true cooperative effort.

"By the time we put it up, nobody could tell whose was whose," says Gallina.

Gallina says she's been crocheting since she was 8, when she used to help her grandmother make hats for babies in the hospitals and bibs for children with developmental delays. Her talents lay dormant, though, until around 2006, when an internet outage inspired her to pick up her crochet hooks again.

"I remember feeling so good about crocheting," she says. "Even when the internet was back on, I didn't care. At the time, I was a tour manager and traveling long hours on the road, so I started crocheting like crazy -- purses and bags."

She says it wasn't until 2011 that she started creating "the fun art stuff."

"I got such good feedback, so I kept going with it. The reactions from people -- it made them so happy. But the thing about crocheting is that crocheters and knitters know that it's the act of doing it that we like the most. It's therapeutic, repetitive, and you can watch television while you do it. You can do it on your own or in a group. The outcome is the reward for your patience and time, but half the time, you're not even thinking about the outcome. It was just nice that people enjoyed the outcome of something that I loved to do."

Gallina's passion soon led her to opportunities to share her work with an ever-burgeoning group of fans. A connection with professional artist and commercial photographer Jeremy Mason McGraw led to an exhibit called "Yarnography" at Bentonville's Pressroom restaurant in 2013, followed by a second one called "Yarnolutionary" where Gallina spectacularly crocheted an event she called "a Marie Antoinette-meets-Pee-Wee-Herman style ball" that featured six crocheted gowns, wigs and even chandeliers. She received attention on a national scale when she got involved with Vogue Knitting Live events -- a sort of fan conference for yarn enthusiasts. She developed her Queen Bee gown -- a stunning, full-skirted ball gown in a bee motif -- for their event in New York and funded the trip by asking Red Heart Yarn to sponsor her.

"It proves that, sometimes, all you have to do is ask," says Gallina with a laugh. "I was a featured artist that week, and Jeremy came back [to town], and we collaborated on some videos for Red Heart."

This past winter, she was asked to create the window display for Lion Brand Yarn in Manhattan.

"That's like the climax, the Olympics, for crocheters," she says. "I did giant bees and a giant vase and roses for their window. That was freaking incredible. Then I thought, 'Well, now what? What else can I do?' I mean, other than crochet the moon. Then I thought, 'I've never crocheted a building.'"

In addition to making one of Gallina's dreams come true, she and her collaborators have made a lot of spectators very happy with their art work, at a time when we could all use something bright and whimsical in our lives. At the end of the month, the panels will be taken down but, says Gallina, they will live on in other ways.

"I think some [of our collaborators] want to keep their work," she says. "It's a lot of work. We might reuse it for other projects, or donate it to the animal shelters. We'll be able to wash it, and it will come out good as new. We may reuse pieces for the Pride Parade, and yarn bomb a frame for Hannah to make a memory."

Gallina's Nana died right before she started "getting crazy" with her artwork.

"She would have gotten a nice giggle out of all of this," says Gallina wistfully.

Print Headline: Not Your Nana's Crochet