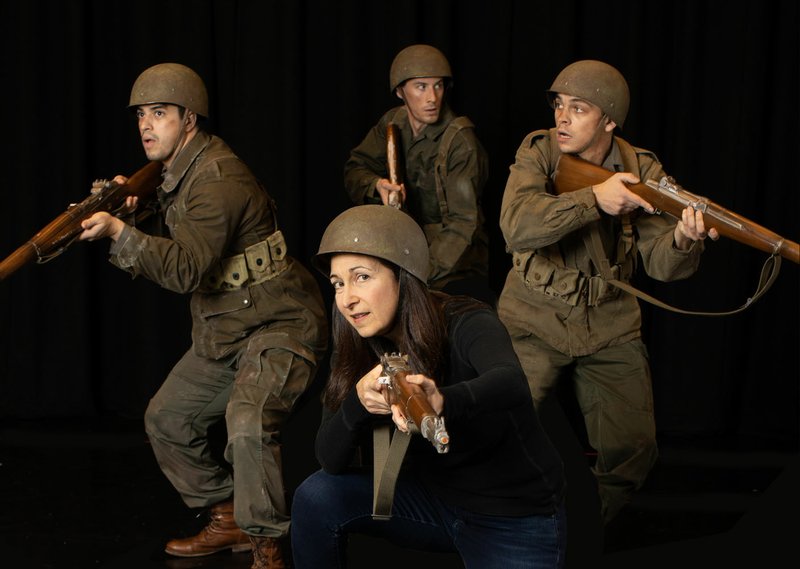 Amy Herzberg (center) will once again portray her father, Art Herzberg, in Bob Ford's play about his service in World War II. A revival of "My Father's War" comes to TheatreSquared this summer. It has been delayed by covid-19 concerns. (Courtesy Photo/Philip Thomas, Novo Studio)

When Bob Ford met and married Amy Herzberg, he didn't just gain new in-laws. He also became one of the caretakers of her father's World War II stories.

"I grew up with these stories," says Herzberg. "I can't remember a time when I didn't know them verbatim, by heart."

WHERE — The Spring Theatre at TheatreSquared in Fayetteville

"Amy started sharing her dad's stories with me pretty soon after she and I met in the '90s, while I was still living in Austin, Texas," adds Ford. "Basically I met Art Herzberg's story when I met Amy."

But it was a visit to Normandy 20 years ago -- on June 7, a day after D-Day celebrations -- that sparked the idea for "My Father's War," Ford's play that was scheduled to open this month at TheatreSquared. Like so many other things, it's been moved -- to June -- but much of the work for the production has been done.

"I've rewritten several key scenes in the play, so the script itself is quite different, and better, I think," than the version that debuted at TheatreSquared in 2009, Ford says. "Also, T2 has matured considerably over the last decade. I love what we did in 2009. But now we have a beautiful new theater and an amazing full-time staff to support the kind of production we've always dreamed of for this play. And, of course, with a new director and actors, it feels like we're producing a brand new play.

"In the course of rewriting the script, I've had numerous conversations with Art, deepening and adding to much of the storytelling," Ford adds. "If anything, he's even more excited to see this one, told by a new group of actors -- in addition, of course, to his daughter playing her dad."

Art Herzberg served as a private in the 90th Infantry Division, Third Army, during the war. "A number of times, the guy next to me got killed, and I didn't," he reflects. "For some reason, I was allowed to come home. If I don't talk for those men, who will?"

"I can't even describe how fun it is to literally step into my father's shoes-slash-boots," Amy Herzberg says. "The joy of getting to live through his experiences -- the most silly and the most gut-wrenching -- just deepens my connection and respect for him. The play has bonded us in a way that wouldn't have happened otherwise."

"I'll never forget watching Art watch his own daughter playing his 19-year-old self in a particularly poignant scene from the war in France," says Ford. "It was only a staged reading, but the scene was completely full emotionally, and his response took him and all of us by surprise. It was like the incident had happened yesterday, it was that alive in him.

"For me, on a personal level, these scenes from his life hit me emotionally every time," Ford adds. "As a young person, I pretty much ignored war in general, and that war in particular. My feeling for soldiers -- all soldiers -- for the price we ask them to pay, has grown exponentially. And working on this play, watching its impact on audiences, myself, my father-in-law, has taught me more about the power of live theater, and its ability to transform, than anything I've experienced."

This seemed like a good time for a revival of "My Father's War," Amy Herzberg says, because "May 8 will be the 75th anniversary of Victory in Europe Day, VE Day. But even more importantly, we've reached a point in time where very few people carry first-hand memories of World War II, its costs and sadnesses and triumphs, and that is precisely what this play is about."

"Everything this play addresses is more relevant today than it was 10 years ago," Ford adds. "Our tragic ability as humans to completely dehumanize our fellow humans; resurgent antisemitism; but also our ability to find humor and delight in even the most difficult moments. We can always use a play that reminds us how lucky we are to be among the living."

Print Headline: No Time To Forget