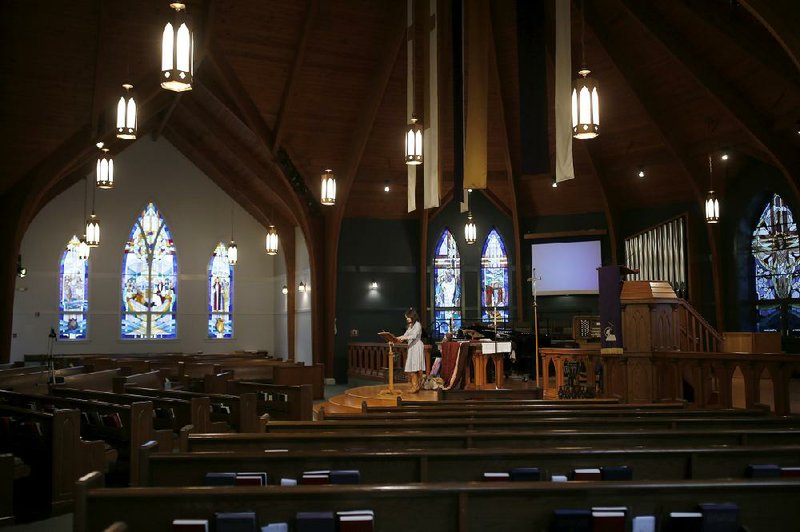 Pastor Kristen Hanna at the Christ United Methodist Church in Chapel Hill, N.C., on Sunday. This week, as the coronavirus has spread, one American ritual after another has vanished, March Madness is gone, no more morning gym workouts and now it was a Sunday without church. (The New York Times/Eamon Queeney)

Instead of greeting thousands of worshippers, volunteers stood in the damp cold, ready to explain to anyone who might not have heard that services are now online only, at least until the threat of covid-19 has passed.

Inside, the Missions Cafe was closed. The halls no longer resounded with congregants singing or children racing to Sunday School. For a church whose stated mission is to be a multicultural community "where people were sad they had to wait a week to come back," waiting took on a whole new meaning.

This week, as the coronavirus has spread, one American ritual after another has vanished. March Madness is gone. No more morning gym workouts or lunches with co-workers. No more visits to grandparents in nursing homes. The Boston Marathon, held through war and weather since 1897, was postponed.

And then, it was a Sunday without church. Governors from Kentucky and Maryland to North Carolina moved to shut down services, hoping to slow the disease's spread. Catholic dioceses stopped public Mass, and some parishes limited attendance at funerals and weddings to immediate family. On Sunday morning, the Vatican closed the coming Holy Week services to the public.

The number of Americans who regularly attend a church service has been steadily declining in recent years. Many have left the traditions of their childhood, finding solace and identity in new ways. But for the 1 in 3 adults who attend religious services weekly, the cancellations have meant a life rhythm disrupted. And for the broader country, canceled services were another symbol of a lost chance to be still, to breathe and to gather together in one of the oldest ways humans know, just when such things were needed most.

Across the country, congregations made do Sunday. As national warnings against large gatherings rose, some churches chose to gather in person anyway. Others buckled down and tried something new. In interviews, Americans who attend churches large and small -- from Minneapolis to Louisville, Ky.; to Raleigh, N.C. -- described how they had been faring these past few days without an important anchor in their lives.

On stage in the auditorium at Bridgeway on Sunday, the worship team performed as pink and purple spotlights swirled, this time reflecting off more than 1,000 empty chairs. "Our God is greater, our God is stronger," they sang. "Into the darkness you shine, out of the ashes we rise."

Volunteers in the back at the food pantry still packed hundreds of bags, complete with packages of meat and rolls of toilet paper, for the dozens of families they serve each week.

Church leaders sitting in a conference room chatted with hundreds of congregants who tuned in through Facebook Live. When it was time to take Holy Communion, the pastor, Dr. David Anderson, urged people to use whatever they had in their kitchens. "Not Corona," he joked. Some used Ritz crackers and water, others cranberry juice or coffee.

In his office, Anderson paused to consider this strange new moment for America.

"It might force people to really ask some deeper spiritual questions," he said. "What is the church? What is community?"

'AN UNRAVELING OF THE SOCIAL FABRIC'

In northeast Minneapolis, Stephanie O'Brien got the email just after noon March 13: Worship Sunday at her church, Mill City, was canceled. The public elementary school where the church meets each week was pulling all permits, until at least the day after Easter Sunday, to guard against the virus.

So much in this world is uncertain that even the small consistency of gathering each week can become the most certain part of someone's life, said , co-pastor O'Brien said.

"It's like pulling the string, an unraveling of the social fabric," she said. "I also don't want people to lose their sense of meaning and purpose."

But in the 12 years since she started the church, she had seen that this was a group that instinctively jumped in to help one another. Each Sunday, worshippers arrived at the school early to help transform the auditorium into their sanctuary, and pack it all up again when they finish.

And sure enough, last Saturday, when she checked on the church's Facebook group, a young couple had shared a flier they had designed and encouraged others to print out and distribute on their blocks.

Minutes later, another congregant had it translated and posted for distribution in Spanish.

IN ISOLATION, YET TOGETHER

Joy Horde has been "planting roots," as she calls it, at Ridgewood Baptist Church in Louisville, Ky., for 53 years. She and her husband, Cecil, came as newlyweds in 1967 with a young baby, and two decades later she was the first woman to be made a deacon. They still attend each week, with their daughters, grandchildren, and even two great-grandchildren.

Usually, their Sunday starts early when they sit at home to go over the Bible study they teach together for the seniors' group. At church, they make coffee to serve to people in the foyer. Cecil Horde, 81, sings in the choir -- "I'm a baritone," he explained.

In their class, each person shares prayer requests, which they write down to remember throughout the week. Recently they've been praying for one man's brother. They thought his health was improving, but on March 11, he developed blood clots. The group kept praying.

That same day, for the first time that the Hordes could remember, they learned their whole church would have to stay home.

"I'm not blind to the fact that we are well into the age group that is probably the most -- where there will be the most loss of life," Joy Horde said.

"We are the endangered species!" Cecil Horde said, with a chuckle.

In their isolation, they remain together, texting with their class members to check in on friends who had surgery, keeping the prayer chain going on the phone, and sending notes when someone has a birthday.

'YOU ARE STILL WITH US'

In this new season, Gwen Graham plans to call people who usually sit near her pew at Wilson Temple even more often than normal, to see how they are doing and whether they need a large-print copy of the church's weekly devotional. She'll keep doing her routine grocery shopping for her 93-year-old church friend up the street, whose aunt had first introduced her to the church 30 years ago.

"Sometimes you just have to be in that house of worship," she said. "But we'll make it."

The church, on Oberlin Road in Raleigh, N.C., is her family, small and intimate, "like it is down home," said Graham, 67.

Nearby in Chapel Hill, Ben Williams looked out over the empty pews of Christ United Methodist Church on Sunday and prepared to lead worship, this time into a camera. In living rooms across town, congregants followed along with a liturgy he had sent out.

Maybe, he hoped, by filming the service experience in the sanctuary, complete with music, worship leaders might help normalize things in the midst of things that are not normal. The worship pastor had even written a "Hymn for Hand-Washing," to the tune of "Amazing Grace":

"Amazing soap! How sweet the smell, that keeps our hands germ free! Please wash your hands, and dry them, too, that we might healthy be."

"It will feel somewhat strange, right?" Williams said. "What we've said is, you are still with us."

Print Headline: 'You are still with us'