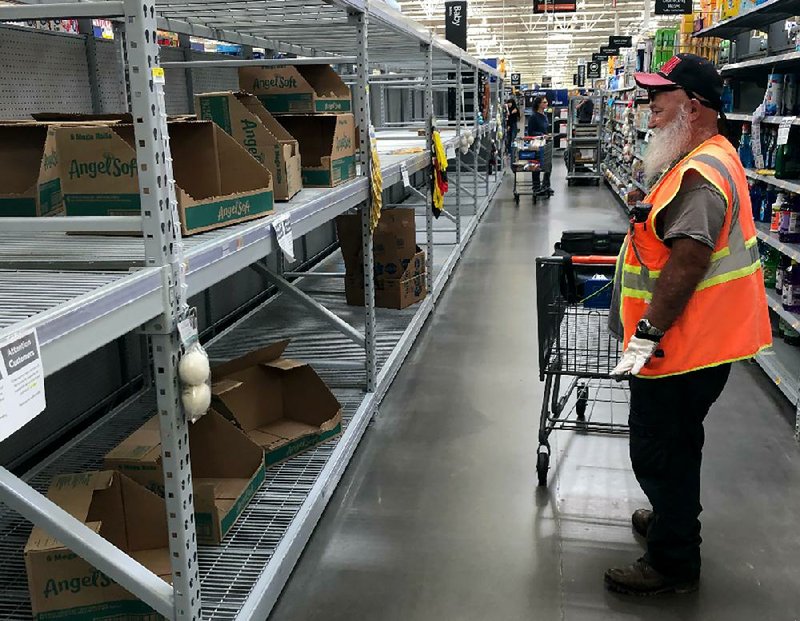 Walmart Inc. will give cash bonuses to hourly employees who work during the coronavirus pandemic, and hire 150,000 workers -- including 3,000 in Arkansas -- to help meet increased demand in its stores, clubs and distribution centers.

John Furner, president and chief executive officer of Walmart U.S., said in a note to employees Friday that full-time hourly workers in the retailer's stores, supply chain and corporate offices will get a $300 bonus, while part-time employees will get $150. The bonuses will be distributed on April 2.

All hourly workers employed as of March 1, and still employed on March 24, qualify for the bonuses, Furner said.

The payout will top $365 million, the Bentonville retailer said in a news release. Walmart employs about 1.5 million workers in the U.S.

"It's been incredible to see Walmart associates step up to the challenge of serving America this month," Furner said in the note. "During a very uncertain and stressful time, you have done your jobs with calm, compassion and excellence."

In addition to the March bonuses, Walmart is distributing its first-quarter bonuses to hourly employees in late April -- a month early, Furner said. That payout will total $180 million, according to the release.

"We know this is a difficult time when many people could use more cash, and we want to support you how we can," Furner said.

Employees received their fourth-quarter bonuses this week. The quarterly bonuses are based on store performance.

Doug McMillon, Walmart's president and chief executive, also praised workers, saying in the release that company employees "have gone above and beyond the call of duty in serving our customers during these unprecedented times. We want to reward our associates for their hard work and recognize them for the work that is in front of us."

Furner also announced plans to add 150,000 workers to help out with the increase in store traffic and online orders during the pandemic crisis. The jobs will be temporary at first, he said, but the company expects many to eventually become permanent.

Walmart will expedite the hiring process for the new workers by temporarily reducing its usual two-week application cycle to 24 hours, Furner said. "If you know individuals who are out of work and would make good additions to the Walmart team, please encourage them to apply through careers.walmart.com," he said.

The retailer's e-commerce rival, Amazon.com, recently announced that it is adding 100,000 full- and part-time jobs and temporarily raising pay for many of its workers in the U.S., Canada and some European Union countries.

The hiring sprees are sure to be welcome news for the thousands of restaurant and other retail workers who have been laid off or furloughed as fear of coronavirus exposure, and in some cases state and local laws, keep many people in their homes.

The U.S. Labor Department reported Thursday that initial unemployment claims for the week that ended March 14 jumped 33% over the previous week, to 281,000. After a long stretch of low unemployment, economists are projecting job losses of anywhere from 500,000 to 5 million in April alone.

Goldman Sachs analysts said in a note that they estimate more than 2 million people filed unemployment claims in the week just ended. Economists surveyed by The Wall Street Journal put that number at 875,000.