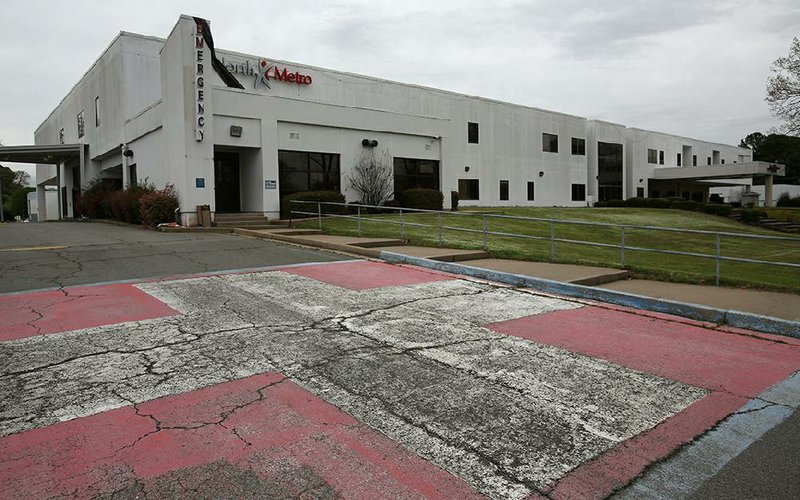 Facing a potential surge in coronavirus patients in central Arkansas in the coming weeks, health officials have raised the idea of reopening a closed hospital in Jacksonville.

As confirmed cases of covid-19 climb nationwide, experts have warned that unless the United States takes dramatic steps to slow the outbreak, the pandemic could stress hospitals and especially intensive care units as critically ill patients fill beds.

It would be helpful to have a facility like North Metro dedicated to treating covid-19 patients, Novack suggested during a task force meeting Wednesday.

Under Novack's proposed setup, the facility could concentrate on confirmed coronavirus patients, including the critically ill, which would allow health care workers wearing full personal protective equipment at all times to treat patients away from their day-to-day hospital in keeping with social distancing methods.

"I don't think any of us can truly keep covid-19 out of our facilities, but I do think having a dedicated place where everyone -- all the boots on the ground -- know what they're facing, then I think those health care workers have a much better chance of being safe and actually not getting sick," Novack said.

How to provide resources and staff for the Jacksonville facility is another matter.

"If I could go back three years and plan for this, I would do something like that," Novack said.

She acknowledged she doesn't know if reopening North Metro is feasible in light of the potential cost.

"Because the North Metro facility has only recently been closed, it seems natural that we would discuss its potential use in a pandemic situation," Wells said in a statement.

As far as the Little Rock region's capacity to handle an influx of covid-19 patients in hospital rooms and ICUs, Wells was more circumspect.

"At this time, we think the region is equipped well," he said. "What we are unable to know is what the potential need would be for various scenarios. It seems wise for us to think through all of our available options and have a plan that we can execute if the need arises."

According to Jacksonville Mayor Bob Johnson, North Metro has around 60 beds in single-patient rooms and an emergency room sectioned off in another part of the facility.

The building was recently remodeled, he said. "It's actually in tremendously good shape," Johnson said Wednesday.

The North Metro hospital held a license for 113 acute-care beds and 31 psychiatric-unit beds as of 2019, according to the Arkansas Department of Health website. The geriatric psychiatric care facility operates under the name Freedom Behavioral Hospital. A family medical clinic attached to the facility is operated by ARcare.

Johnson said he has heard "rumors" that a provider might want to use the hospital during the coronavirus pandemic, but nothing more concrete. He said he is open to the idea of using North Metro to treat covid-19 patients and would be happy to serve as a contact person with the hospital's owner.

"We wouldn't have the authority to make that decision, but I would assist them in it in any way possible," Johnson said.

At the moment, Johnson is in negotiations with an area hospital for the provider to lease the North Metro emergency room from Allegiance through the city's hospital board.

The deal has been in the works for more than a year and Johnson had hoped to have a deal signed this month but then the coronavirus outbreak happened, he said. The city badly needs an emergency room, Johnson said.

It's unclear what resources, government action or timeline would be required to quickly reopen the closed sections of North Metro for use during the pandemic.

"Those are the types of questions we are currently exploring," Wells said in the statement.

​​​​​While Arkansas has, on average, more hospital beds per 1,000 residents and lower occupancy than most states, hospitals in the state's urban core are busier than average, particularly in Pulaski County, federal data examined by The Associated Press and the Arkansas Democrat-Gazette show.

According to an AP analysis of Centers for Medicare and Medicaid Services data, the University of Arkansas for Medical Sciences typically fills 84% of its general beds, leaving 81 empty, and 88% of its intensive-care unit beds, leaving three empty.

A recent study published in The Lancet medical journal indicates that about 9% to 11% of all covid-19 hospitalizations will result in intensive-care unit stays.

Administrators at seven central Arkansas hospitals sent a letter to Little Rock's mayor on Tuesday explaining that they would focus "emergent, urgent and time-sensitive care" only going forward, canceling anything "that can safely be postponed."

"These are necessary steps to protect both our patients and staff and to conserve precious medical supplies, hospital capacity and healthcare personnel," the group wrote.

University of Arkansas for Medical Sciences Chancellor Cam Patterson told system trustees during a meeting Thursday that the coronavirus outbreak is a "dire situation" that is expected to have a "dramatic" impact on UAMS' operations.

Personnel are being reassigned to focus on this issue system-wide, including the medical college's dean, Dr. Christopher Westfall, who was working in the Little Rock hospital's drive-thru screening center earlier this week, he said.

The Baptist Health system also is reviewing where additional capacity exists at its facilities around the state to manage potential surge demand, its human resources chief said in an email.

For the state's many rural hospitals, a problem that may emerge as the outbreak advances is a lack of intensive-care beds, said Delta Memorial Hospital chief executive officer Ashley Anthony.

Like many critical access hospitals (a special designation for facilities in remote areas), the Dumas provider doesn't have its own ICU. Instead, such hospitals work to stabilize patients so they can transfer to a higher level of care elsewhere.

They are working with regulators and the Arkansas Hospital Association on plans to boost capacity, Anthony said, including potentially adding beds in existing clinic space. A requirement that critical-access hospitals have no more than 25 beds has temporarily been waived by the federal government.

Smaller providers also anticipate revenue hits as they try and minimize elective services to prepare -- a dangerous prospect for facilities that operate on a shoestring budget at the best of times.

"Right now, things are really, really slow for all of the hospitals ... you're not seeing people having tests done, or procedures," Anthony said.

In addition to worries about strained resources, health officials are fretting over how to best manage potential workforce shortages related to the crisis.

With schools closed, some hospital employees have needed to rearrange schedules to manage child care. There also is the threat of depleted staffs as workers exposed to covid-19 patients need to self-quarantine.

Anthony says so far, the Dumas hospital has been fortunate because employees' spouses have picked up the slack on caring for children, but absences due to quarantine or illness from exposure are an anticipated concern.

"That is our biggest worry, as far as our health care workers go. ... I don't know that we ever can actually be prepared for that," she said.

Jefferson Regional Medical Center has seen some staff absences that other workers have volunteered to cover, said chief quality officer Mary Daggett, and several of its employees have self-quarantined because of exposure.

Workers in the UAMS system have been using the employee intranet to try and match college students and teens who are home from school with parents who need childcare, spokeswoman Leslie Taylor said.

She added that they have a handful of workers who are now self-quarantined, "but not really a lot" of the system's roughly 10,500 employees.

Should school closures go on for long periods, they are looking at expanding services at a child enrichment center that offers day care for babies and pre-kindergarteners, and employees are sharing babysitting leads, she said.

"The longer this goes, that absolutely is a challenge," she said.

The pediatric provider has stepped up screenings for symptoms, training in using personal protective equipment and minimized the number of people in the hospital in an effort to keep workers healthy and on the job.

Novack was unavailable for comment about the Jacksonville proposal, according to Baptist Health spokeswoman Cara Wade. Phone calls and emails to the behavioral health facility and Allegiance Health Management were not returned.

Wade said Baptist Health personnel have not visited the North Metro hospital to assess it for use during the pandemic.

According to a foreclosure lawsuit filed by First Arkansas Bank and Trust in September 2019, the financially troubled parent company of the North Metro hospital failed to make mortgage payments.

Whether officials move forward with Novack's idea to use North Metro may depend on Little Rock's available bandwidth as the city attempts to fight the virus.

The Little Rock coronavirus task force has discussed creating a triage-style phone number to connect residents with a provider which has the greatest capacity. The city also has floated the idea of a screening center at the Southwest campus of Baptist Health to pool resources from nearby hospitals in a joint effort.