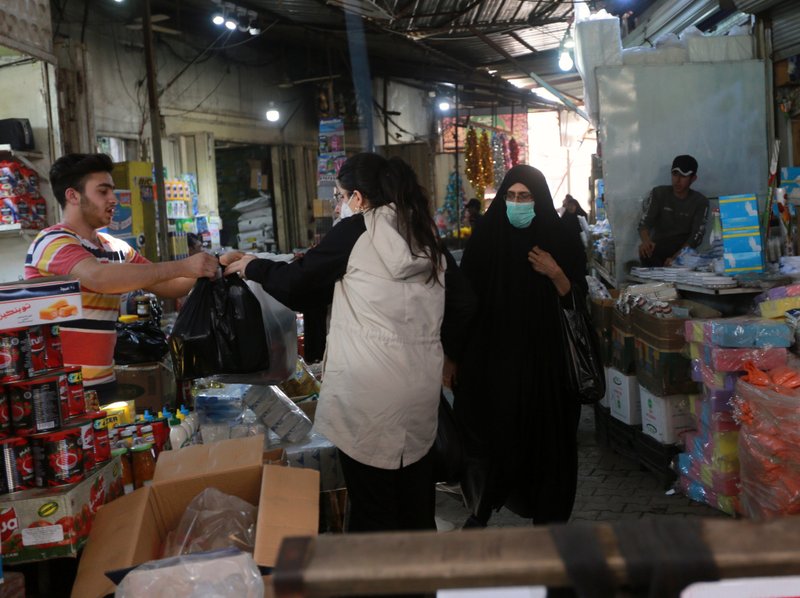 In this Tuesday, March 10, 2020 photo, people shop in the main Shurja market in central Baghdad, Iraq. The economic fallout from the new coronavirus coupled with a sudden drop in oil prices threatens to catapult Iraq into an unprecedented crisis. The crude-exporting country is struggling to finance measures to contain the COVID-19 pandemic amid a leadership void in the federal government. (AP Photo/Hadi Mizban)

BAGHDAD -- The economic fallout from the coronavirus coupled with a sudden drop in oil prices is threatening to catapult Iraq into an unprecedented crisis.

The crude-exporting country is struggling to finance measures to contain the pandemic amid a leadership void in the federal government, and the unexpected oil price war between Russia and Saudi Arabia is further exacerbating budget shortfalls as losses accrue daily in trade, commerce, tourism and transportation.

"This epidemic is striking our economy more than it is striking our health," said Thamir Gharib, a hotel owner in Karbala. The Shiite holy city in southern Iraq that hummed with religious pilgrims all year long is now quiet.

Revenue from tourists who traveled to holy sites in Iraq accounted for nearly 8% of the country's GDP, according to figures from the World Travel and Tourism Council. But as the global pandemic takes hold of the country, religious tourism has ground to a halt, and Gharib's hotel doors -- like others in Karbala and the nearby city of Najaf -- are shuttered.

"If we calculate the damages with the fall of oil prices, it's no less than $120-130 million per day," said Mudher Saleh, financial adviser to the prime minister.

But Iraqi officials appear to be slow to heed these calls amid a deepening political crisis as rival blocs sparred for weeks over the naming of the next prime minister, precipitating a void in the country's top leadership. On Tuesday, the former governor of Najaf, Adnan al-Zurfi, was named premier-designate but it remained to be seen whether political blocs will approve his Cabinet lineup.

Prime Minister Adel Abdul-Mahdi's government has been functioning in caretaker status since his December resignation under pressure from mass protests. Previous premier-designate Mohammed Allawi withdrew his candidacy amid delays and political dysfunction.

"The prime minister has absolved himself of political leadership and is acting as an administrator. Politically we don't have any leadership or consensus," said Sajad Jiyad, a Baghdad-based analyst.

Other officials expressed optimism that oil prices would bounce back in a matter of months and that Iraq could rely on central bank reserves in the meantime. Based on assessments from the bank and the Finance Ministry, these reserves stand between $45 billion-$60 billion.

Oil prices were already suffering shock from the virus outbreak and plunged further when Saudi Arabia began heavily discounting its crude and announced plans to increase output. The move came after Russia refused to sign on to a plan proposed by the Saudis to cut output and manage global oil supplies at an OPEC meeting earlier this month.

Oil currently trades at around $26 per barrel, the lowest in 18 years and about half of what Iraq has projected to fund the state budget for this year.

Iraq relies on oil exports to fund more than 90% of state revenue.

Information for this article was contributed by Salar Salim of The Associated Press.