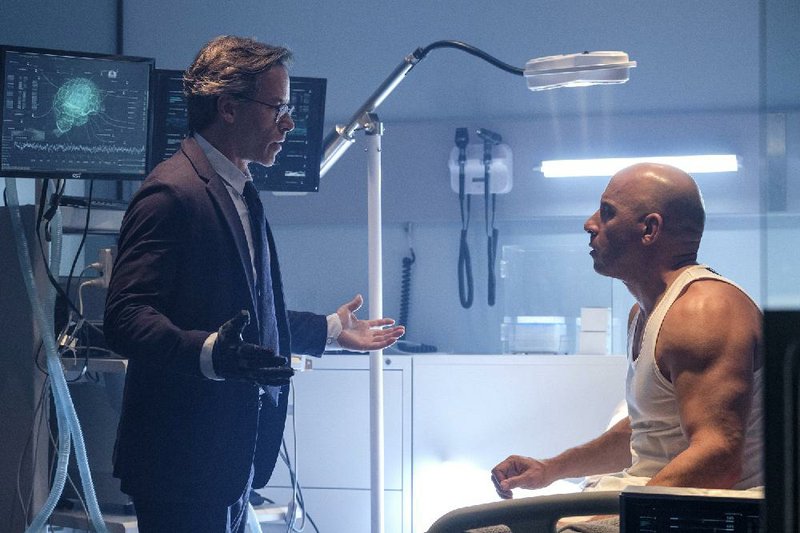 Guy Pearce (left) and Vin Diesel star in Columbia’s comic-book adaptation Bloodshot. It came in third at last weekend’s lackluster box office and made about $9.3 million.

LOS ANGELES -- Here is all you need to know about the mindsets of moviegoers as the coronavirus pandemic intensifies: God beat a superhero at the weekend box office.

Seemingly every aspect of American life has been disrupted by the coronavirus pandemic, and the weekend ritual of watching a movie in the dark with strangers has been no exception. Domestic ticket sales totaled about $55.3 million, a 44% drop from two weekends back, despite three new films -- Bloodshot, The Hunt and I Still Believe -- arriving in wide release.

The No. 1 movie was a holdover: Onward, the Disney-Pixar fantasy about two elf brothers who have an accident with magic, collected an estimated $10.5 million at 4,310 theaters in the United States and Canada -- a 73% drop from its first weekend. Pixar movies typically decline between 30% and 45% from their first to second weekends, demonstrating the impact of coronavirus fears on moviegoing.

In a surprise -- at least for Hollywood -- an under-the-radar new release rooted in religion, I Still Believe, sold the most tickets of the newcomers. It collected about $9.5 million from 3,250 theaters. The film cost less than $10 million to make.

The Hunt (Universal-Blumhouse), a satirical horror film about elites killing deplorables that cost $15 million to make and tens of millions to market, collapsed with about $5.3 million in ticket sales.

Receipts totaled about $55.3 million in U.S. and Canadian theaters, according to studio estimates Sunday. Not since 2000 has weekend box office revenue been so low, according to data firm Comscore, when $54.5 million in tickets were sold on a quiet September weekend. More people went to the movies the weekend after Sept. 11, 2001.

The weak box office returns are not surprising. As experts continue to warn against mass gatherings, several cities and counties have placed restrictions on crowd sizes. One of the most effective ways to slow the spread of covid-19 is the use of social distancing, or the avoidance of close contact with others (particularly those who might be infected by the disease). The general guidance says individuals should maintain six feet of space from one another, making a communal venue such as a movie theater, in which patrons sit next to one another, particularly problematic.

In response, the AMC and Regal movie theater chains, the country's two largest, both cut their seating capacity by 50% last week. The goal, AMC said in a statement, is "to provide additional space between guests within all its U.S. theaters, to keep its theaters clean and to discourage those with health concerns from coming to its theaters."

"With this action, we are facilitating the 'social distance' between guests who still want to see movies on a big screen," AMC Chief Executive Officer Adam Aron said in a statement. "These are uncharted times in the United States."

Jim Orr, Universal's distribution chief, said the industry was doing its best to navigate the unknown.

"We're still all working through it. The circuits are doing a great job of taking government mandates and applying it to their businesses the best they possibly can," Orr said. "This is a unique point in time in our industry and maybe in our nation. But we'll get to the other side of it, and the box office will come back very healthy. It's just a matter of when that might be."

Health officials urged people to stay home and minimize social interaction, especially in states that have instituted bans on larger gatherings. California put a limit on gatherings of 250 people; New York set its ban at 500 people; Ohio banned gatherings of 100 people or more.

"With the worldwide coronavirus epidemic causing many domestic theater chains to go to reduced seating and many international territories to either completely or partially close all theaters, as well as creating uncertainty about going to crowded spaces, all titles have seen larger than expected drops," Disney said in a statement.

"It's so hard to predict how this will play out," said Paul Dergarabedian, senior media analyst for Comscore. "It's an ever-changing, ever-evolving situation that the entire world is trying to wrap their minds around. For the short term, obviously there's an impact."