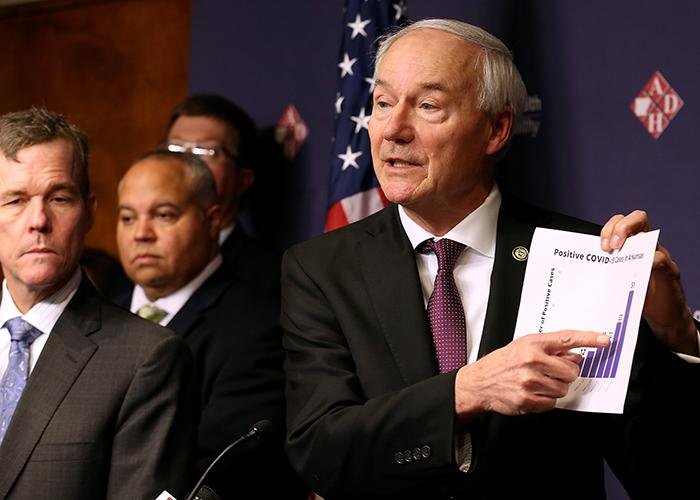 “We’re starting to recognize the extent of the challenges we face,” Gov. Asa Hutchinson said Thursday at the Arkansas Department of Health as he displayed a chart showing the increase in coronavirus cases. More photos at arkansasonline.com/320governor/. (Arkansas Democrat-Gazette/Thomas Metthe)

Gov. Asa Hutchinson on Thursday ordered the closure of all restaurant dining rooms, bars and gymnasiums in the state as the number of confirmed coronavirus cases rose by two-thirds, to 62, including in nine counties where cases hadn't previously been identified.

The Republican governor said he also would extend the closure of the state's public schools for three weeks, until April 17, when he will evaluate whether to reopen them "based upon the public health conditions at the time."

He said he was also directing state agencies to have employees work from home as much as possible, and for hospitals, clinics and mental health facilities to screen staff and visitors for fever and other symptoms of covid-19, the illness caused by the coronavirus.

He said the new cases were "not a surprise," as the state's testing capacity has increased, but "reflect the fact that we do have continued challenges in Arkansas."

"We're starting to recognize the extent of the challenges we face," he said.

Just a day earlier, Hutchinson had said the situation didn't yet warrant the closure of bars and restaurants.

On Thursday, he said his order was prompted by the discovery of the virus in new counties and by one or more new cases that appear to have resulted from community transmission, in which the source of infection is unknown to health officials and could be someone who is passing the virus to others in the state.

"It's clear to me that we do have increasing community spread," Hutchinson said.

[Video not showing up above? Click here to watch » https://www.youtube.com/watch?v=2haSF8-iEYc]

He said the new measures are designed "to get a handle on this, and to try to shorten the time frame that this is such a disruptive action in American life and in our own lives and in our business lives and in our incomes and everything that we really see happening here."

Restaurants may still offer delivery, drive-thru and carry-out service. Rules issued by the state Department of Finance and Administration's Alcoholic Beverage Control Division on Thursday allow restaurants with wine and beer permits to sell and deliver unopened containers of wine and beer with food for off-premises consumption.

The rules also allow liquor stores to offer curbside service and delivery, and encourage those with drive-thru windows to use those exclusively.

"Indoor venues such as gyms" will be closed to "nonessential functions," Hutchinson said.

He encouraged businesses to have employees work from home to the extent possible, screen staff and visitors, and "enforce social distancing," a concept that health officials have said includes staying at least 6 feet away from other people.

Hutchinson also recommended that people avoid groups of more than 10 people, a revision of his previous recommendation against gatherings of 50 or more and in line with recommendations issued Monday by the White House coronavirus task force.

He said older people and those with serious medical conditions should stay home as much as possible and avoid unnecessary contact with visitors.

Others should also avoid unnecessary trips where exposure to large groups is likely and should not visit nursing homes, retirement centers and other long-term care facilities, he said.

He encouraged Arkansans to use restaurant drive-thru, carry-out and delivery service as a safety precaution and to support the businesses.

He also suggested they "enjoy walking, hiking, fishing and other outdoor activities consistent with social distancing."

To respect the separation of church and state, he said he wasn't placing restrictions on churches, but recommended that they also take steps to prevent spread of the virus.

"We do think it would be wise that they abide by these restrictions in terms of limiting the number of people and probably canceling services in most instances and looking for other ways to be able to fellowship," Hutchinson said.

"They need to be creative and they need to minister to their congregations in the same innovations that we're asking businesses to do," he said.

The 25 new cases that the state Department of Health reported on its website Thursday were the largest number yet since the state reported its first case March 11.

The state had set a high Wednesday with 15 new cases.

The latest cases included the first confirmed in Clark, Craighead, Grant, Independence, Pope, Poinsett, Searcy, Sevier and Van Buren counties, indicating the spread of the virus to at least 20 of the state's 75 counties.

A map on the Health Department's website indicated that at least six of the new cases were found in Cleburne County, which was listed as having 10 or more cases. A day earlier, it had one to four cases.

Since Wednesday, Pulaski and Jefferson counties have been listed as having 10 or more cases.

Health Department spokesman Meg Mirivel said six of the people with known infections were hospitalized at some point. She didn't have information on how many remained in the hospital Thursday evening.

Tests were being performed Thursday on an additional 146 people. Meanwhile, 509 people were under home quarantine because they had contact with someone who tested positive or recently returned from an area with a large outbreak. That was an increase of 86 from a day earlier.

People who test positive are isolated in their homes or the hospital until it is determined they are no longer contagious.

Because of the growing number of cases, Smith said it's no longer possible to investigate to determine all of the people they may have infected.

The Health Department will prioritize investigating infections of health care workers, residents of nursing homes and other long-term care facilities, and settings where a large number of people may have been exposed.

"We're not going to be able to contact every single person in Arkansas who's had contact with a positive case," Smith said.

Those who come into contact with someone who has tested positive should quarantine themselves at home for 14 days, he said. If they develop symptoms, he said, they should call their health care provider or visit a hospital drive-thru testing site.

"This is a serious situation," Smith said. "We're going to need to make some pretty dramatic changes in our lives in the short term."

But he said Arkansans shouldn't be afraid because state officials have been preparing for the outbreak and many people are helping respond.

The virus, which emerged late last year in Wuhan, China, spreads through respiratory droplets emitted when people sneeze or cough. Symptoms include fever, cough and shortness of breath.

Tests of an additional 50 people by the Health Department lab and 17 by commercial labs came back negative.

UAMS has screened about 4,200 people through its drive-thru screening site, website and telephone screenings, Chancellor Cam Patterson said. About half of those screenings were performed Wednesday, he said.

Of the 1,500 people who used the drive-thru, about 25% had specimens collected that were tested by the Health Department or private labs. Seven percent of those tests were positive, he said.

The hospital Thursday received its second and third machines from GenMark Diagnostics in Carlsbad, Calif., that will each allow the hospital to test about 140 patients a day.

Patterson, a cardiologist, said he is working with Hutchinson on getting testing kits that will allow the hospital to begin using the machines. By early next week, the hospital also expects to have its research laboratories ready to test about 250 people a day.

As the state's testing capacity expands, so will the number of positive cases, Patterson said. He said the number of people who test positive each day will likely keep growing for about a week after the rate of infection has plateaued.

"The expectation is, if we manage this right, the plateau will actually be fairly protracted," he said "If we manage this badly, the number will just keep going up until everybody's infected, and then it will drop down, and that's what we don't want to have happen.

"That would be when the health care system gets overwhelmed."

By postponing medical procedures that aren't urgent, hospitals have freed up bed space, including 100 beds at UAMS, to handle a potential influx of patients.

While the supply of ventilators has been a concern nationally, Patterson noted that the state's hospitals have 500 of them. So far, he said, he knew of only two coronavirus patients in the state who required ventilator support.

"The number of total infections would have to be extremely large to put a strain on our ventilator capacity," he said.

Protective gear, such as N95 respirator masks, is a different matter amid increased worldwide demand.

He said he's working with the state Department of Finance and Administration on making "very large bulk purchases of the equipment that would be available to hospitals around the state."

He said his own hospital has a three-week supply.

"But if we have four or five inpatients with covid-19 infections, that number could drop to less than a week in short order," he said. 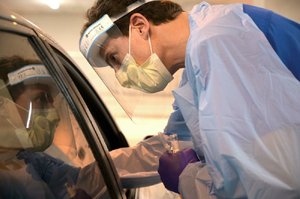