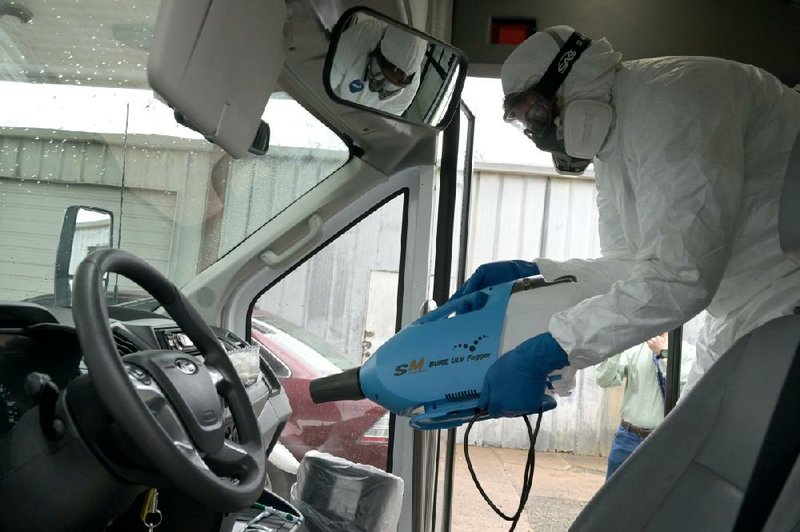 One business sector that has seen demand soar because of the coronavirus pandemic is commercial cleaning services.

Dow Janitorial, which employs 500 people throughout the state, doesn't have enough staff to meet the demand of new and existing customers to disinfect their workplaces.

"I've never seen anything like it," said Dow Worsham II, the North Little Rock-based company's president and chief executive officer and a 35-year veteran of the industry.

The demand has also worked to the advantage of Little Rock Coaches. After business evaporated in the wake of the epidemic, company President Cary Martin pivoted to cleaning vehicles as well as buildings after acquiring two commercial-grade foggers.

"We started out sanitizing our own vehicles, and people found out how we were doing it and what we were doing and wanted us to sanitize their vehicles," he said. "Now we've got some other folks who want us to do their personal vehicles, buses, day care centers. We've got some churches that are interested, and it's on and on. It's kind of neat."

Dow has always had the capacity to disinfect for its clients, and typically saw demand for the service peak during flu season.

When the coronavirus started becoming a concern, clients started asking for the service as a preventive measure, Worsham said.

"Initially, it was people wanting to be proactive, showing their employees they were taking the initiative in trying to prevent," he said. In recent days, the concern has risen exponentially.

"Now, it's just out of general concern: 'What if we have a case and we just don't know about it,'" Worsham said. "Then, of course, we've had some who either have had confirmed cases in a facility or people in a facility that have had contact with someone confirmed."

Dow Janitorial employs two methods to kill the coronavirus as well as fungi, bacteria and other viruses.

One is a traditional labor-intensive process of wiping down all "touch points" in a facility, including door handles, stair rails and elevator buttons.

"And we're running out of manpower to go in and wipe down for everybody asking for it," Worsham said.

It is "where we use a machine that sprays disinfectant throughout the air and the electrostatic part -- an electrical charge on the chemical allowing it to stick to everything, not just fall to the surface," he said. "When you put a negative charge on the chemical, it sticks to the horizontal, the vertical and the underneath. It sticks to everything.

"That's what most people are doing, because it is the most effective and efficient way to get everything disinfected."

Little Rock Coaches' Martin said he feels fortunate to have happened onto filling a space in the cleaning services industry.

The motorcoach industry stands to lose $8 billion as a result of the pandemic, according to Bus and Motorcoach News, which covers the industry of 3,000 small, largely family-owned businesses such as Martin's and employs 100,000 people.

The industry was approaching its busiest period when the pandemic hit. Nearly all of the charter and tour market has stopped operating, according to John Dunham & Associates of New York, an economic consulting firm.

"We were set for a record March," Martin said. "We were very excited."

The company's fleet of 18 coaches and about 50 employees were preparing to take school kids to Washington, D.C., New York, Orlando and Disney World and on ski trips as well as other destinations.

"Thousands of kids were going all over the country, and then of course, when the pandemic hit, everything just stopped," he said.

Except for cleaning the buses, a process the coronavirus has taken to a new level. When Martin looked into the way the professionals clean, he acquired two foggers, which was easier said than done.

"I think I got the last two in the state," he said.

The UVL foggers are a "mister," Martin said. "It looks kind of like a leaf blower. And it sprays a mist of [hydrogen peroxide] to kill the virus. It takes about 10 minutes to dry. And when it dries, its not harmful, it smells clean and fresh.

"It kills HIV, hepatitis, bugs and all kinds of stuff. It's industrial-grade used in hospitals, the same chemicals they use to clean their medical facilities."

But it gave Marin an idea.

"While we are still into motorcoaches, we decided to find something for our employees to do, and our goal is to keep them busy, and we found something that we can do that will help other folks as well," he said. The company charges $80 to disinfect a bus, $50 for a van and $25 for a personal vehicle.

Martin spread the word through organizations his company belongs to, and it worked.

"Today [Thursday] we took care of two of the airport parking shuttles," he said. "They brought them over, and we are going to treat the rest of their fleet either this weekend or next week when they get them over."