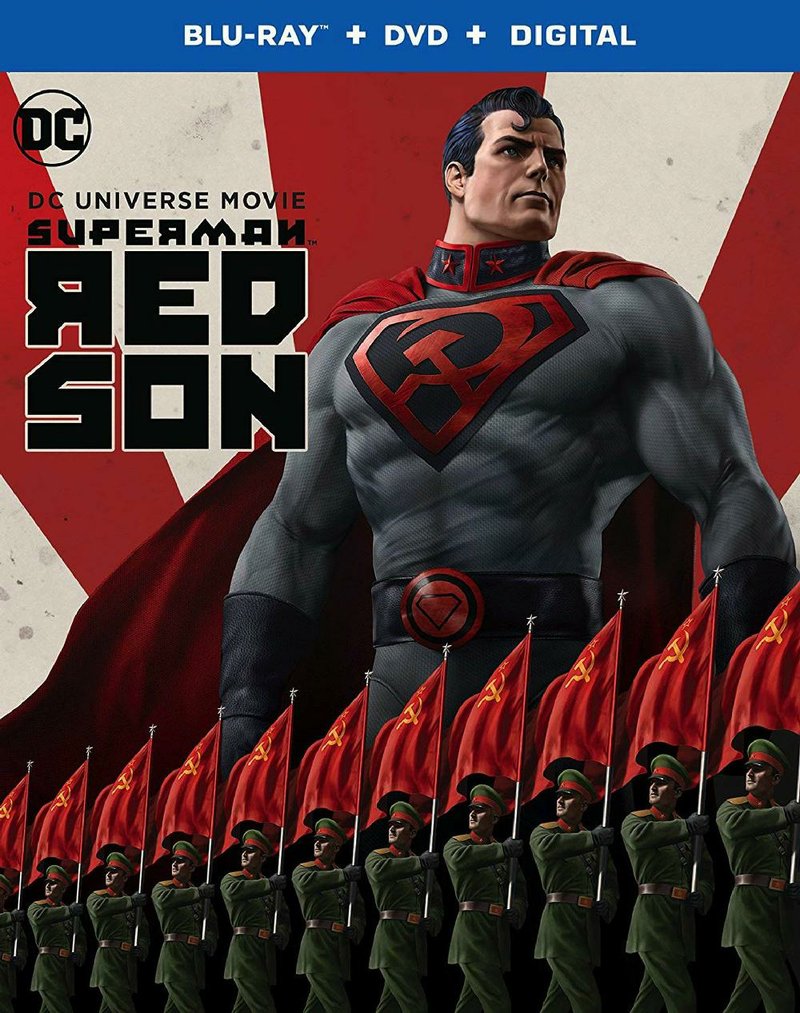 Well, with the movie theaters closed, that kind of shuts off a lane or two of what a film columnist can write about. Fortunately, there are home releases. And this week I finally got my hands on the newest DC Comics animated film, Superman: Red Son.

Now, Superman is far from my favorite DC Comics character. I don't hate him. I just like him better when he teams up with Batman, like in 2009's Superman/Batman: Public Enemies. But even Batman isn't my favorite comic book character. That probably goes to Nightwing.

Anyone who knows a little bit about comics probably already knows Nightwing is Dick Grayson, who was the very first Robin, the boy wonder. I love his charm and eternal optimism. He's the soul of the DC Comics universe (except for in the horrible storyline they have him in now).

DC Comics is finally finding its footing in the live-action world of movies, ever since the release of Aquaman, they've all been good. But DC has long ruled the animated arena. Its cartoon series and movies have always blown Marvel's out of the water (with the exception of the '90s X-Men cartoon and maybe X-Men: Evolution).

And I'd say probably 75% of DC's animated movies are good to great. The company's newest movie is Superman: Red Son, and it follows a sort of what-if scenario. The what-if being, what if the baby that would become Superman landed in communist Russia instead of Kansas? Served the Soviet Union instead of the United States?

It's certainly a bizarre question. The movie is based on a comic run of the same name published in 2003 under the Elseworlds imprint that explores alternate, non-canon realities. I'll confess I've never read it. I don't even really remember seeing the trailer for this film except maybe once a month ago.

I wasn't excited about this movie. I knew that I'd watch it when it came out, but how soon I had no clue, that is, until all the theaters shut down. Funny enough, that bumped it up on my priority list. But even after seeing it, I'm still way more excited about the next DC animated film, Justice League Dark: Apokolips War.

The first Justice League Dark film was amazing, mainly because it dealt more with magic and the supernatural world of comics you don't see as much of in mainstream superhero flicks. Throw in characters such as John Constantine and Zatanna, and I'm sold on the story.

But I went ahead and rented the movie on Amazon Prime, plopping down on the couch to watch it while my pork chops cooked in the oven.

The art for Superman: Red Son was solid. I always feel like my favorite art style for DC animated properties will be that of the 2000s Justice League and Justice League: Unlimited cartoon series.

DC's animated movies used a lot of styles until 2013 when the DC Animated Movie Universe (DCAMU) got its launch with Justice League: The Flashpoint Paradox. The art style changed when the animated movies started to take on more characteristics of its 2011 "New 52" relaunch (a terrible mistake in the comic industry).

I didn't like the more realistic and single perfect body standard proportions found in the New 52 movies like Justice League: War. There didn't seem to be as much variation in body shapes. Everyone looks the same. They might just be a little bigger or smaller. I much prefer the more stylized and varied look found in the Justice League Unlimited cartoon.

I was overjoyed when I saw Justice League vs. the Fatal Five was returning to that original early 2000s animation style. Of course, that movie isn't considered part of the DCAMU. It was separate, as is this new Superman movie.

And the art of Superman: Red Son is somewhere between that early 2000s DC animation and the new 52 movie style. I liked the art well enough, especially Wonder Woman's final appearance.

It may seem like a weird part to pick, but my favorite aspect of the animation was just Superman's laser eyes. The way they were animated, it was so intense, and they looked painful when they hit their target. It almost looked like Superman was shooting lava from his eyes.

The Soviet imagery is on point throughout the movie, constantly reminding viewers this Superman isn't in Kansas anymore (sorry, Toto). Whether Superman is in Moscow or South Korea or at the Berlin Wall, this is a communist Superman who believes wholeheartedly in the principles of a powerful state and overthrowing the "shackles" of capitalism.

The art did a good job of setting a consistent theme for this movie, which was an intensifying Cold War and battle of ideals on each side of the Iron Curtain.

My biggest gripe with the movie (and it's a strange one, I'll grant you) is how they handled The Daily Planet, Metropolis' daily newspaper, and the most famous newspaper in all of comics. There's a scene where Lex Luthor is reading the paper, so I paused it to see what stories they'd generated (I do work for a newspaper, after all).

And the bloody animators had the gall to use placeholder text. Are you kidding me? This is a story about Superman, who is synonymous with The Daily Planet, and DC couldn't be bothered to write some fake stories about teacher pay increases or a car chase? What an insult!

But it's the story that is so bizarre to me. I don't normally care for what-if narratives. What if Captain America had an Iron Man suit? I don't really care. What if Gandalf hadn't returned to his friends? Well, he did, so I'm not really curious.

But hey, I paid the $6.99 to rent the dang thing (is it always that expensive?), so I must have been somewhat curious. What I got was a bunch of stuff out of left field. Hearing Superman speak with a Russian accent was a given for the story. But hearing Batman with a Russian accent and realizing he's a terrorist in this movie certainly took me by surprise.

BROKE A LOT OF RULES

The movie is never boring, but I did grow weary of hearing Superman talking about communist ideals. They probably could have trimmed that by a minute or two without losing anything significant in the movie.

Wonder Woman is probably the best part of this movie, always trying to push Superman to be better than Stalin (which you'd think would be a pretty low bar, but ...). When she reveals herself to be gay, I had a good laugh at the line, "I come from an island of all women. You figure it out." No Steve Trevor in this universe, I guess. And that's fine.

In a universe where Wonder Woman doesn't really leave Themyscira often, mathematically and logically, it makes sense she'd fall in love with a woman. They're all Amazons, after all. So I suppose a lot of women are going to fall in love with other women on the island. Case closed.

Even if the story never gets boring, the pacing sure does feel uneven, especially with the random time skips through history. One second Eisenhower is the president. Then, Kennedy is. Technology is extremely advanced for the time, even if Lex Luthor is a super genius. Somehow, he clones Superman well before even the internet is invented.

Honestly, one of the easiest ways for me to tell how much time had passed in the movie (since Superman doesn't age at the rate of normal humans) was how Lex Luthor was losing his hair and slowly going bald. I'm thankful the animators threw that in for the sake of chronology.

I kept asking myself when the story was going to end and, more frequently, who the hero of the film was. Because Superman is definitely not a good guy throughout the movie. But Lex Luthor does evil things as well. When he just kept pumping more energy into his Superman clone, and it was being overloaded, screaming in pain, I felt the intensity and sympathy for the lab creation.

So I was really just left with Lois Lane and Wonder Woman (Diana) to root for, not that I'm complaining. The women really were the only good people in the movie. Hooray, feminism? I'm unsure of the message the writers were going for. War is evil? Men screw everything up? Both capitalism and communism have flaws? I don't know. The morals in this film were all over the place.

The music wasn't anything to write home about. It wasn't bad, but it didn't stand out. I guess the score was satisfactory if I didn't notice it throughout the movie.

Superman: Red Son isn't a bad film. It's just a strange spectacle with a bit of uneven pacing and muddled messaging. Go Wonder Woman, I guess?

Print Headline: A bizarre spectacle that is Superman: Red Son