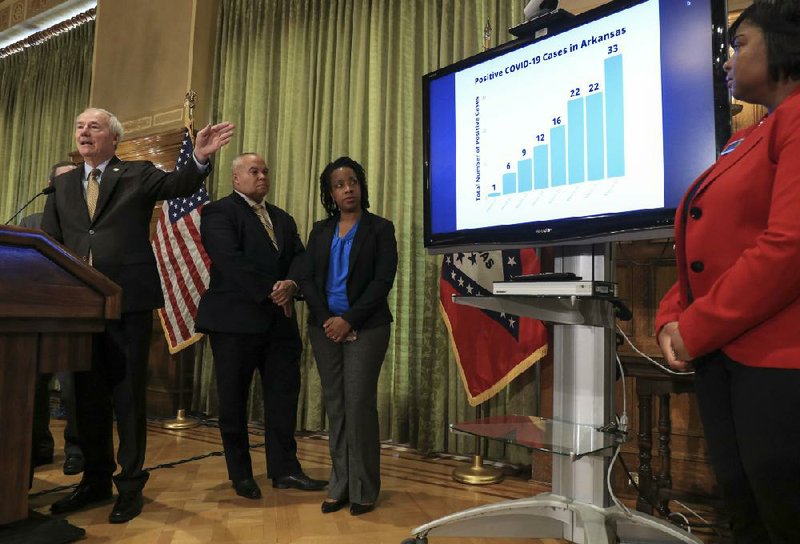 Gov. Asa Hutchinson, joined by health officials and members of his Cabinet, said Wednesday at the state Capitol that he is tapping funds from various sources to help Arkansans cover losses associated with the coronavirus. (Arkansas Democrat-Gazette/Staton Breidenthal)

Fifteen more Arkansans have tested positive for the coronavirus, including for the first time people in Washington, Faulkner and Bradley counties, according to the state Department of Health.

The number of known infections in the state now is at 37.

The increase was the largest number of positive results reported in a single day by the state and reflected the capacity of the Health Department to test an increasingly larger number of samples.

Gov. Asa Hutchinson said he is tapping different sources to provide $16 million worth of loans to hospitals, nonprofit groups and small businesses affected by the coronavirus; providing extra funding and loosening requirements for child care centers; and temporarily waiving the work requirement for families on food stamps.

"The state cannot cover the loss of every business but we can help to provide bridge loans to help companies weather this slowdown and to retain workers during this national emergency," Hutchinson said.

Health Secretary Nate Smith said Wednesday afternoon the "vast majority" of the newly discovered infections are believed to have occurred during trips outside the state or because of contact with someone in the state who tested positive earlier.

But he added that the department is still investigating and hasn't determined the source of all the infections.

At the time that he spoke to reporters Wednesday, the state had reported finding 11 new cases of infection. That number rose when the department updated its website at 7:34 p.m.

[Video not showing up above? Click here to watch » https://www.youtube.com/watch?v=Hv--8r9UGE0]

The department also reported that it was testing 112 more people. Meanwhile, 423 were under home quarantines because they had contact with someone who tested positive or recently returned from an area with a large outbreak. That was an increase of 113 from the number being monitored as of Tuesday morning.

A case in which the infection source is unknown is considered an instance of "community spread," indicating that at least one other person who is unknown to health officials has the virus and could be spreading it to other people.

Just one of Arkansas' cases, a Little Rock resident who tested positive last week while hospitalized at UAMS Medical Center, is considered to have been infected through community transmission.

Of the state's travel-related cases that have been discovered since the first Arkansan tested positive on March 11, Hutchinson said one was a person who had returned from a trip to France and two people who had been to India.

Eight people are believed to have gotten the virus while traveling within the country, including to Colorado, Las Vegas, New Orleans and Springfield, Mo.

Some of the people were infected outside the state, then passed along the virus to others in Arkansas.

"The message again before spring break next week: Everyone needs to rethink the risk of travel, and what happens when you go and meet with people you don't know and come back," Hutchinson said.

The virus, which first emerged late last year in Wuhan, China, spreads through respiratory droplets emitted when people sneeze or cough. Symptoms include fever, cough and shortness of breath.

After the first person in Arkansas -- a patient at Jefferson Regional Medical Center who had been to New Orleans for Mardi Gras -- tested positive last week, Hutchinson declared a public-health emergency and several colleges closed their campuses.

On Sunday, Hutchinson ordered the state's public schools to close for most of this week, with plans to reopen March 30 after spring break.

A map on the Health Department's website indicated that at least one of the people who tested positive since Tuesday morning lives in Pulaski County, and one lives in Jefferson County.

The map indicated that 10 or more people in each of those counties have tested positive, up from a range of five to nine a day earlier.

Washington, Faulkner, Saline, Garland, Cleburne, Cleveland, Bradley, Lincoln and Desha counties were each listed as having at least one but fewer than five cases.

Washington County Judge Joseph Wood and Fayetteville Mayor Lioneld Jordan indicated in a news release that one person who tested positive is a Fayetteville resident.

In Pulaski County, sheriff's office spokesman Mitch McCoy said two of the agency's employees were under home quarantines on Wednesday after they or someone close to them had contact with someone who tested positive for covid-19, the illness caused by the virus.

Whether those employees have the virus hadn't been determined as of Wednesday afternoon, he said.

Seven other employees who had previously quarantined themselves were cleared to return to work after the consultations with the Health Department, he said.

"Right now we're confident that no inmates had exposure to these two that are under self-quarantine," he said.

Twelve of the new positive test results were from the Health Department's lab and three were from out-of-state, private labs.

An additional 51 people tested by the Health Department and 36 by commercial labs had a negative result.

People who have tested positive are being kept isolated at home or in the hospital.

The Health Department could initially test just 20 people a day but has been expanding its capacity, which it expects to eventually reach 200 a day.

A machine that UAMS Medical Center expects to allow it to test about 140 people a day arrived at the hospital on Wednesday.

Hospital spokesman Leslie Taylor said the facility should be able to start using the machine by the end of the week.

At about the same time, it hopes to start testing about 250 samples a day using its research laboratories.

One potential bottleneck is a shortage of the kits used to swab noses. She said the hospital is exploring options for obtaining more of the kits or using other products.

"We're looking at things like could we use the swabs that would normally be used for flu," she said.

So far, the hospital has collected samples for testing from 355 people at its drive-thru site or emergency room and sent them to the Health Department lab or a commercial lab.

But despite calls by Arkansas' U.S. Sen. Tom Cotton, a fellow Republican, for a nationwide shutdown of nonessential business activity, the governor has yet to order the closure of bars, restaurants and other gathering places.

Little Rock Mayor Frank Scott Jr., who has ordered a curfew in the city from midnight to 5 a.m., said Wednesday that he wants to close bars and restaurants, but his discussions with Hutchinson had not yet reached that point.

"We're in constant conversation about all options on the table," Scott said. "He and I are having discussions to move to that direction."

Hutchinson said his statewide emergency declaration prohibits cities from taking such action on their own.

"Mayor Scott and I talk every day and he's been a great partner in all of this," he said. But, he added, "Unless there's some special uniqueness about Little Rock, we want to treat the restaurants statewide in the same fashion."

He noted that many people are already avoiding going to restaurants and that restaurants have responded by expanding their delivery and takeout options or spacing out tables to reduce the chance of transmission.

"So far, I think it's working well," Hutchinson said. "If we have to take additional steps we will."

Hutchinson said he's working with the state's congressional delegation to allocate $12 million in federal Community Development Block Grant funds to help companies and nonprofits, with an emphasis on hospitals and other businesses essential to the coronavirus response.

Commerce Secretary Mike Preston said the state hopes to provide the assistance through loans to businesses.

Hutchinson said he will also allocate $4 million from his quick action closing fund to provide loans of up to $250,000 to help businesses make payroll and stay in operation.

He said he has also requested a disaster declaration from the U.S. Small Business Administration that would open up loans of up to $2 million to provide working capital for businesses.

While the schools are closed, state Department of Human Services Secretary Cindy Gillespie said the state is increasing the amount it pays for child care for low-income families. For instance, the rate for an infant or toddler will increase by $10 a day.

Currently, the rate is $21-$28 per day, depending on the location of the center and other factors, Human Services Department spokesman Amy Webb said.

More than 800 of the state's 2,000 child care centers, many of which are connected with school districts, have closed, she said.

She said the state is also providing a "mass good cause exemption" from the food stamp program's work requirement for April and May so that people don't lose benefits. The state also is expediting applications for benefits for people who lose their jobs as a result of the coronavirus. 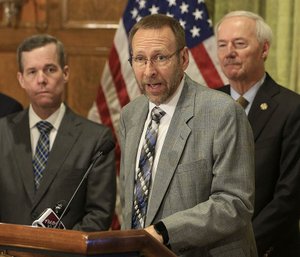 Nate Smith (center), director of the Arkansas Department of Health— joined Wednesday by University of Arkansas for Medical Sciences Chancellor Cam Patterson (left) and Gov. Asa Hutchinson — said the “vast majority” of new cases are believed to have occurred on trips out of state or by contact with someone in the state who tested positive. More photos at arkansasonline.com/319governor/. (Arkansas Democrat-Gazette/Staton Breidenthal)