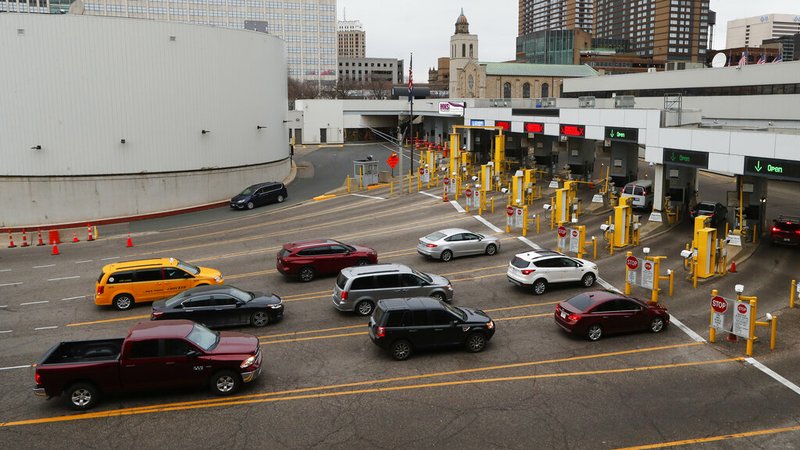 Vehicles enter the United States as a minivan drives to Canada in the Detroit-Windsor Tunnel in Detroit, Monday, March 16, 2020. Canadian Prime Minister Justin Trudeau says he is closing his country's borders to anyone not a citizen, an American or a permanent resident amid the coronavirus outbreak. (AP Photo/Paul Sancya)

I have written often over the years about globalization as a factor in our lives and some of the associated benefits and liabilities. But the fundamental point is that globalization is a reality. And in recent days and weeks that has been vividly demonstrated.

We are also seeing a debate that may be with us far into the future, a debate over blame and responsibility. At this stage, however, there is much we don't know about how we got here and where we may be headed with the outbreak of coronavirus and the longer-term impact and ramifications -- and what further challenges we may face. Moreover, we are in the midst of a presidential election campaign, in which the issues of blame and responsibility may figure prominently, even decisively. All the while, issues and problems are multiplying by the minute as the global nature of this crisis is increasingly evident, beginning with China and reaching countless others -- Italy, Spain, Brazil, Canada, Germany, France, Japan, Israel, Iran and South Korea, to cite obvious examples.

President Trump labeled the situation as a national emergency. It could, however, be more accurately referred to as an international emergency. And there seems to be little doubt among most Americans, including experts, that the pandemic had its origins in China. Trump and U.S. officials have referred to it as a "foreign virus." The reality is that a virus can't be confined within national borders, a further illustration of globalization.

This virus, designated as covid-19 by the World Health Organization, is generally believed to have emerged from Wuhan, a mega-city of 11 million, though only the ninth-ranked Chinese city in population. I have been to Wuhan, which, as you might expect, combines sleek modernity with primeval Third-World elements. Authorities believe the virus had its origins in a Wuhan food market that sold exotic animals for human consumption. But to underline the globalization factor, Wuhan is also a center of international transportation, shipping and auto-making. It has been a major international air hub, with flights to New York and San Francisco and world capitals.

Although it may be far-fetched for most of us, some Chinese officials have been suggesting the virus is actually an American disease that could have been introduced by U.S. military personnel when they visited Wuhan in October.

So, we dig into the blame and responsibility game. President Trump asserts that the United States has made "tremendous progress" in confronting the problems and proclaims, "We are doing a great job because we acted quickly and early." Referring to the confusion and conflicting information coming from his administration, he deflects blame and famously says, "I don't take any responsibility at all." The president was responding to questions about the limited access to testing, an aspect of his administration's coronavirus response that has drawn wide criticism. Administration officials said the U.S. tested about 11,000 people during the first seven weeks of the outbreak -- roughly as many as South Korea was testing each day.

And while the president boasts of doing a great job, others don't see it that way, pointing to a slower and less certain beginning and to the confusion surrounding the availability of testing. On Jan. 8, the Washington Post reported an outbreak of an "unidentified and possibly new viral disease in central China" that was sending alarms across Asia." Already, several countries in that region were contemplating quarantine zones and scanning travelers from China for "signs of fever or other pneumonia-like symptoms that may indicate a new disease possibly linked to a wild-animal market in Wuhan."

Should this nation have been better prepared? Apparently, in a reorganization engineered by then-national security adviser John Bolton, the U.S. pandemic response team was downgraded, effectively leaving the U.S. more vulnerable to the type of outbreak we are now facing.

We have seen contradictions and confusion and attempted clarification in statements by the administration. What we haven't seen much of is coordination and cooperation internationally, recognizing the reality of globalization.

The disruption and damage run deep into the daily lives of millions. There is the obvious case of the extreme volatility in global financial markets. But, when Trump speaks, there is a lack of empathy and the human dimension -- no real sense of the uncertainty and hardship that affects so many individuals, families, businesses, sports, entertainment as well as military, and civic, educational and religious institutions.

For the many thousands of Americans whose lives and well-being are being transformed, this is certainly not a "hoax," as Trump referred to it at a political rally, while downplaying the threat.

There are key lessons to be learned from this experience. One vital point is that in this globalized age we need to strengthen our capabilities to monitor what is happening around the world and plan accordingly. This includes the central reach and role of cyber-power. A blue-ribbon commission recently announced plans for dealing with a potential cyber-attack against the U.S. Covid-19 provides a preview of what a crippling cyber-attack would involve: Transportation, infrastructure and health care services would be severely disrupted. We would need proven experts, thorough planning and competent and responsible leadership at the top -- qualities that have been in short supply.

A second and essential take-away has become something of a cliché: We are all in this together.

More than a cliché, it is a striking truth.