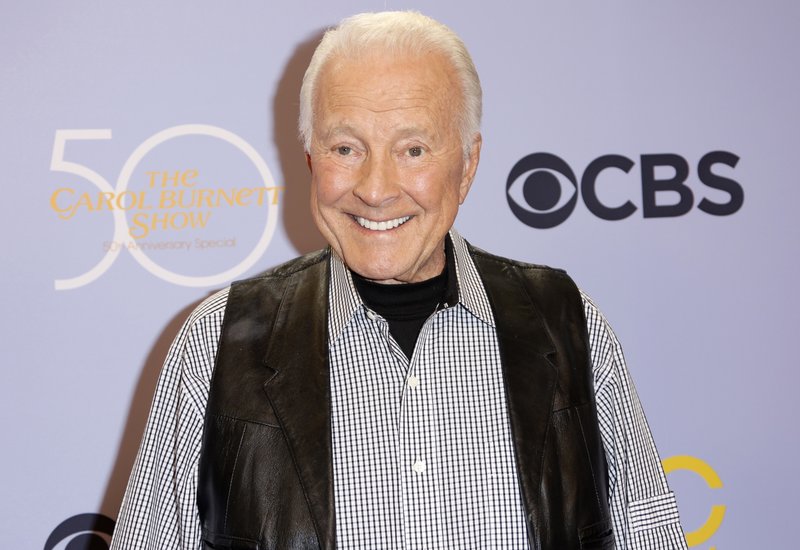 FILE - In this Oct. 4, 2017, file photo, Lyle Waggoner arrives at the &quot;The Carol Burnett 50th Anniversary Special&quot; in Los Angeles. Waggoner, who played comic foil on the show, has died. He was 84. (Photo by Willy Sanjuan/Invision/AP, File)

LOS ANGELES -- Lyle Waggoner -- who used his good looks to comic effect on The Carol Burnett Show, partnered with a superhero on Wonder Woman and was the first centerfold for Playgirl magazine -- died Tuesday. He was 84.

Waggoner, who was battling cancer, died peacefully Tuesday at his Los Angeles-area home with his wife of 60 years, Sharon, at his side, according to a family statement.

A household name in the 1970s, Waggoner went on to become a successful entrepreneur. He built a behind-the-scenes business that provides custom trailers that keep stars comfortable during production breaks. Playing on his surname, he called it Star Waggons.

In the mid-1960s, the Kansas-born Waggoner was appearing in run-of-the-mill movies such as Swamp Country and The Catalina Caper and was a finalist to play Batman in the campy TV series that eventually starred Adam West. Then he was called to audition for Burnett's variety show.

The actress-comedian recalled that she wanted an announcer for the show who could do more than introduce the commercials. He had to also be good-looking, so she could do her ugly-duckling, romance-besotted character with him, and funny, so he could contribute laughs.

"In walked Lyle Waggoner," she recalled in her 2010 book, This Time Together. "Gorgeous? Yes. But so much more. He was incredibly funny. He had a sly, tongue-in-cheek delivery that told you he was putting himself on and not taking himself seriously."

As the series evolved, she said, he showed such great comic instincts that he got roles in sketches and became a full member of the cast. He stayed with the show from its beginning in 1967 to 1974.

Along the way, he made history of sorts in 1973 when the fledgling Playgirl magazine chose him as his first centerfold, calling him "the stuff of which sexual fantasies are made, a 6-foot-4 hunk of gorgeous beefcake."

In 1976 Waggoner was picked to star in Wonder Woman, based on the venerable comic book heroine. The series ended in 1979, and Waggoner focused on his rental company, with acting jobs on the side.

Waggoner, who was born in April 1935, is survived by his wife, two sons and four grandchildren.