In Arkansas newspapers 100 years ago this March, the Irish were "a situation" and "a cause for alarm." But their patron St. Patrick was "brave and gentle and inspired, and fond of miracles."

In many reports, Ireland wanted independence. Respectable Irish representatives were touring the East Coast, eloquently explaining justice and asking politely for funds while local bands merrily honked out "The Wearing of the Green." But nine Protestant ministers calling themselves the Ulster Unionist Delegation also were touring about, and they asked American Protestants to underwrite an opposite cause.

Irish independence was a popular item among Democrats, who pushed pro-independence resolutions through Congress over Republican objections.

Meanwhile, anonymous nationalists in Ireland had killed a policeman.

Even from a distance, the Irish appeared divided, and they were. None of them seemed grateful for the liberal bent of the British government, which under Prime Minister David Lloyd George was beavering away on a plan to grant the whole of Ireland "home rule."

Patient Reader knows Irish history is far more complex than Old News could possibly explain in mere inches of type, even if I understood it well enough to avoid botching the job. So, let's stipulate everything that happened from 1850 through 1916.

Home rule had been a popular concept in Ireland before the British crackdown after the Easter Uprising of 1916 (which you know about because we stipulated that). Home rule was envisioned as a limited form of self-governance that would preserve the Britain-Ireland union by granting the Irish their own familiar officials who could hash out local problems the Crown didn't prefer to hash for them. Support for the concept dropped drastically while a world war and peace negotiations took precedence in London.

But 1920 was the year George was determined to do something for the Irish, and home rule was the something he had determined to do. As it happened, his chief Irish consultants were from union-loyal Northern counties, "Ulstermen." Ulster is a province with nine counties; three of them were Roman Catholic, but the others were Protestant. Those six Protestant counties wanted to stay in union with Great Britain, and the color orange was associated with union.

Orangemen feared they would be disenfranchised by the Catholic majority in a home-rule government. And among the now dominant Irish nationalists, the good ship Home Rule had sailed away, too. The Sinn Fein party was done chafing under the yoke of absentee landlords and banking overlords. They demanded independence, and green was their color.

1920 would become the year of the partition of Ireland. In December, Britain would slice a Protestant Northern Ireland away from "Southern Ireland" and grant both regions their own wee legislatures. Partition would then proceed to prove its unreliability as a squelcher of civil wars.

Too simple, but whew. Wth that out of the way, finally we can turn to the newspaper archives for intimations of whatever St. Patrick's Day meant to Arkansans in March 1920.

St. Pat’s wasn't a big story. It was just little speeches, a couple of parties and the fact that the annual fireman's ball coincided with the date. But it was acknowledged. For instance, under the headline "This Will be a Great Day for the Irish" in the March 17, 1920, Arkansas Gazette, readers learned that "it is believed" the saint "will be the judge of his people on the last day."

Besides beating a drum to drive snakes into the ocean, this report explained, St. Patrick was "dreamy and imaginative, yet withal, a missionary, a legislator, a statesman and a reformer." And his most beautiful memorial was not in Ireland but the Cathedral of St. Patrick in New York.

The next day, two reports stood side by side in the Gazette. From Washington, D.C., came news that the auto bearing the (stroke-disabled) president had paused while leaving the White House grounds just long enough to allow photographers to snap his picture. President Woodrow Wilson noticed spectators at the gate wearing green capes and remarked to wife Edith that he had forgotten what day it was and thought he ought to be wearing some green. By the time they returned to the White House, his study held a vase of green roses and carnations. His staff wore green neckties and had green flowers in their offices, too.

In Arkansas, this happened:

Five Irishmen, probably for the first time in their lives, received flowers from a florist yesterday, and the flowers, contrary to all tradition, were not love tokens. They were yellow jonquils.

Oh no, not jonquils. As the Gazette reporter took pains to explain, "no wearer of the green could find jonquils anything but repugnant objects on St. Patrick's Day."

Anything yellow, even the vivid spring jonquil, would suggest at once the Orangeman and keen party dislike.

But the five Irishmen took the gift as a joke, and when questioned "immediately indulged in long chuckles of laughter." One of them, Pat Ring, was quite sure the flowers came either from cotton broker Sam Dillard or A.L. Smith. The flowers were done up in tissue beautifully, Ring noted.

Mr. Dillard protested that he was innocent, but he knew too much about the matter to be quite guiltless.

For instance, Dillard knew the names and nicknames of the recipients: Patrick F. "Pat" Ring, M.T. "Mike" Welch, A.L. "Rose" Smith, R.C. "Cal" Bright and Robert "Bob" O'Rorke. He also knew that Bright was born on St. Patrick's Day and made a custom of handing shamrocks to his friends.

Many observed the day by the wearing of green yesterday. The day is not celebrated as it is in many larger centers, where there are parades and meetings in which the history and glories of Ireland are told.

The reporter's interpretation of yellow jonquils as insulting to the Irish caused me to scratch my head over this social item from Nell Cotnam's column in the Gazette, published March 21. But then I remembered "narcissus" probably meant paperwhites in 1920:

The Pulaski Heights Study Club was entertained at a St. Patrick's luncheon on Tuesday at the home of Mrs. Hugh Hart. The color scheme of green and white was carried out in the menu and table decorations. The central decoration was a green basket tied with white tulle and filled with narcissus. The places were marked by little Irish girls in green kirtles, and the favors were green and gold shamrocks. Covers were laid for 15 guests.

After the luncheon, Mrs. Sittlington presented an excellent program on Mexico.

A reader who last week watched the video I shot in Mount Holly Cemetery to accompany a dramatic reading of the 1913 poem "To a Daffodil in Mount Holly" by Josie Frazee Cappleman, has asked to read the thing in print. Here is a picture of the poem as it appeared on the page: 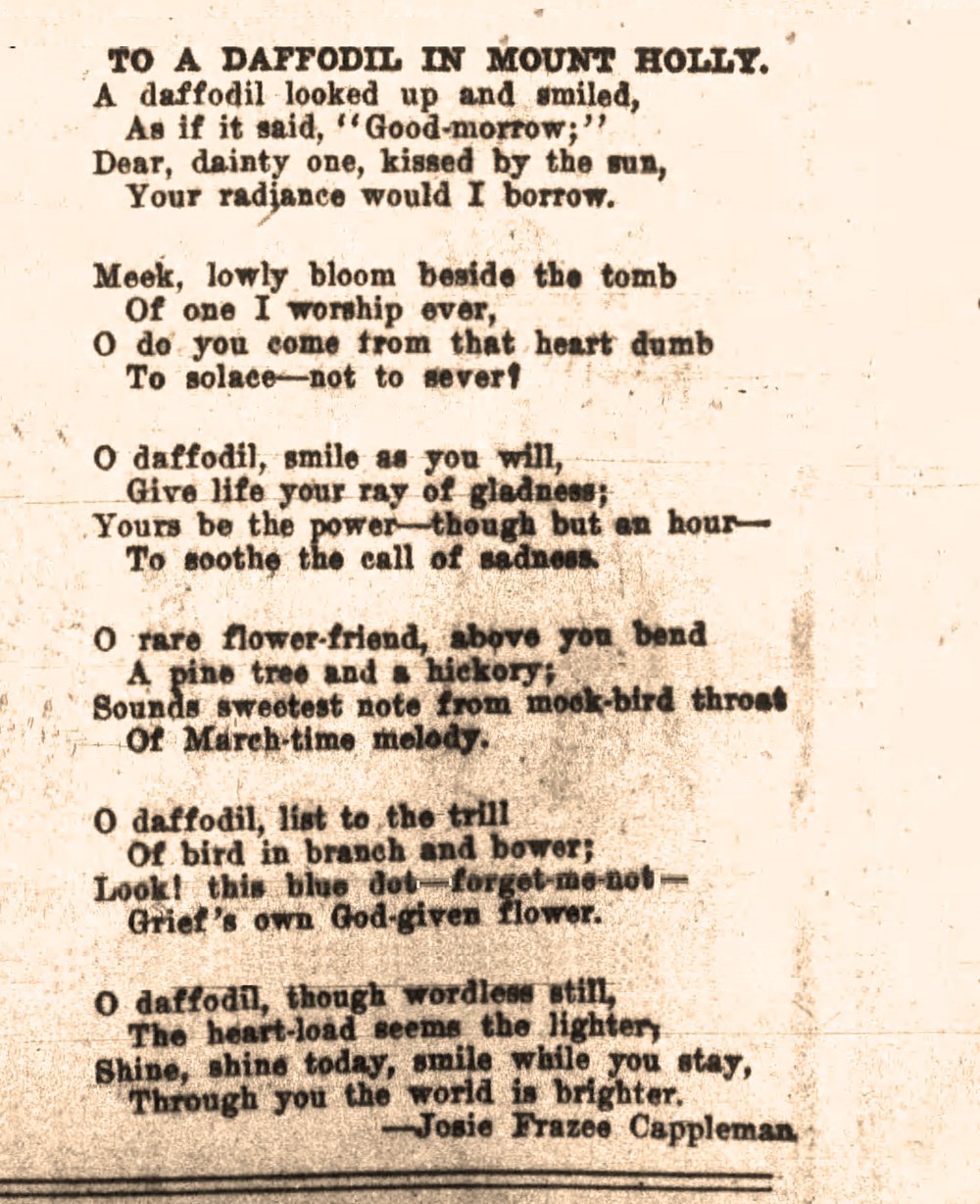 "To a Daffodil in Mount Holly" by Josie Frazee Cappleman from the March 11, 1913, Arkansas Gazette. (Arkansas Democrat-Gazette)

Pursuit of that video led me to the author's grave, where all my merriness over the awkward grandeur of her versifying left me.

It is a solemn, gray, un-daffodilly sight.