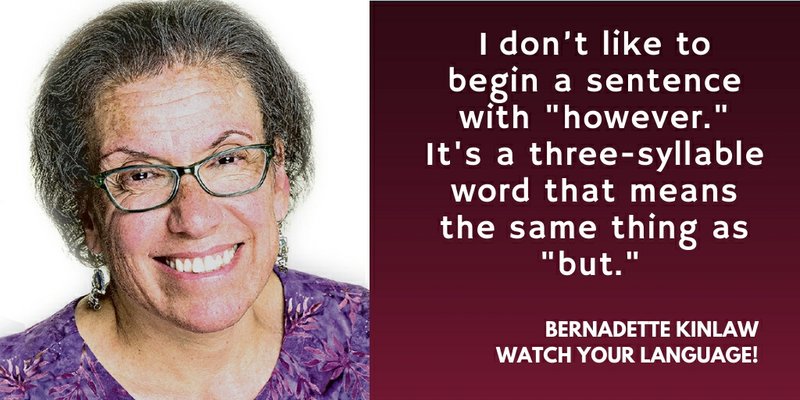 A reader asked whether it's acceptable to start a sentence with "and." And I'm happy to say it's fine.

Merriam-Webster has an interesting passage on the matter. It says most of us seem to remember being told not to begin a sentence with this and similar words such as but, yet, and or. And it lists a number of word people who have written against doing so. But doing so is acceptable.

Wilson Follett, who began writing Modern American Usage in the 1950s and '60s, said that the rule against using those words to start sentences was an old-fashioned, unsubstantiated one.

I found good examples in The Washington Post where the "and" works well within one sentence, and you don't need a whole new one.

For most people, symptoms are mild and might include a slight fever or a cough.

He loved the staff who helped him shave, he socialized with other residents, and he enjoyed the chicken pot pies for dinner.

But at times, you want to add a good deal of information, and keeping it all within the confines of a single period could make it too much of a run-on sentence. Here's where it works well:

Now the nursing home is surrounded by news trucks and police cars. The quaint sign marking its entrance is a recurring image on national news. And the voices of concerned family members are being broadcast across the nation, questioning whether their relatives have been deemed "disposable."

I will add that I don't like to begin sentences with "however." It's a three-syllable word that means the same thing as "but." So, I would always change "however" to "but" without any change in meaning.

A number of readers have asked me to explain double possessives.

First, a possessive shows that someone or something owns something or has something. If I made key lime pie for my significant other, I would say, "This is Floyd's pie."

I might want to return across the Atlantic to see "the green hills of Ireland." This is another way of phrasing possessives.

I'm a friend of Maddy's.

This is a double possessive that's unneeded. It says twice that I am her friend: once with "a friend of" and once with the apostrophe-s. It's more succinct to say, "I'm Maddy's friend."

I realize these rewrites sound less specific than the original. I think it can be solved in this example:

But double possessives are needed at times to clear up confusion.

"This is a painting of Norma Jean's." That means the painting belongs to Norma Jean.

You use the apostrophe-s so that people don't think the painting is a portrait of Norma Jean.

That would be: "This is a painting of Norma Jean."

You would never use a double possessive when you're talking about an inanimate object doing the possessing. It would be incorrect to say, "I'll visit the green hills of Ireland's."

Readers a long, long time ago told me about a great word, and I'm finally writing about it. It's "scapegrace," defined as a "scoundrel or rascal," two other outstanding words that I don't use often enough.

"Scape" is a variation of "escape." So, a scapegrace is someone who has somehow bypassed receiving the grace of God. Perhaps the person failed to get on the correct line that day.

I found scapegrace on only about three dozen places on The Washington Post website, and most of those examples lived on the books page.

Working as a parlor maid named Eileen, she must deal with the scapegrace urchins Alf and Binnie, a pair who could teach even the Artful Dodger a trick or two.

Her father, the scapegrace son of old Mrs. Ellison, was a gunrunner killed by bandits and her mother a volatile Russian beauty, pathetically bitten to death by venomous "barking spiders."

And this was my favorite:

Ellman wrote that ­Wilde lived his life twice, first as scapegrace, second as scapegoat. "Wilde" captures both the grace and goat-ishness.

"I have half a mind to tell him off."

I thought this was a goofy phrase.

Since back in the 16th century (no, I'm not that old), if I had a mind to do something, I would be inclined to do something. Maybe I'd have a mind to add an espresso maker to my can opener. In the 18th century, the phrase "to have one's mind half made up" to do something came into the language. That turned into "I have half a mind to ..."

Merriam-Webster clarified a point I didn't know I knew. The phrase means you would like to do something because you're angry or annoyed. But you know you won't actually do anything.

I heard amusing advertising-speak recently. The commercial was for a kind of bedsheet. The speaker urged people to buy a set. Though instead of a "set of sheets," she said to order our own "sleep system." Isn't that fancy?

Print Headline: Have half a mind to start off with 'and'