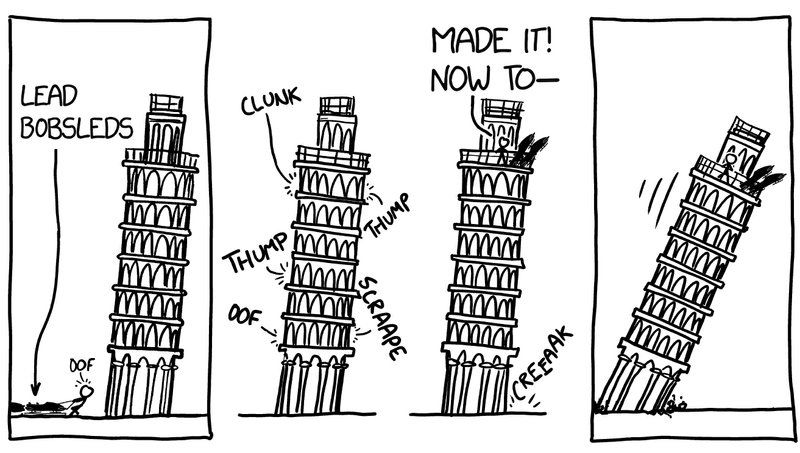 According to legend, Galileo dropped two weights from the Leaning Tower of Pisa to show that lighter and heavier objects fall at the same speed. In theory, the experiment would work equally well with bobsleds. But it wouldn't. (Randall Munroe via The New York Times)

Q: Why, when I drop two bobsleds of unequal weights off the Leaning Tower of Pisa, do they hit the ground at the same time, but when I put them both at the top of a bobsled track, the heavier one gets to the bottom first?

A: According to popular legend, Galileo dropped two different weights from the Leaning Tower of Pisa to show that lighter and heavier objects fall at the same speed. In theory, the experiment would work equally well with bobsleds.

Thanks to air resistance, Galileo's experiment doesn't always work. Gravity pulls everything downward equally "hard," but heavier objects often fall a little faster because they are more able to punch through the air blocking their way. A watermelon will fall a lot faster than an inflatable watermelon-shaped balloon.

In the absence of air, objects of different weights do fall at the same speed, as famously demonstrated with a hammer and a feather on the moon by Apollo astronaut David Scott.

Here on Earth, it's easy to see the effect of air resistance on extremely lightweight objects like feathers, but it affects big and heavy objects, too. Since the effect on those objects is smaller, it can be hard to notice if you're not looking closely.

Drag calculations enable us to estimate how much faster a heavier object will fall than a similarly shaped lighter one. If Galileo dropped a 12-pound bowling ball and a 13-pound bowling ball from the Tower of Pisa simultaneously, by the time they reached the ground, the heavier bowling ball would probably be several inches ahead of the lighter one. The difference might be hard to spot without a high-speed camera.

Now apply the same drag equations to figure out what would happen with Mark's bobsled experiment.

The minimum weight for an empty two-person bobsled is about 375 pounds, so imagine that Mark dropped a pair of them from the tower, one of which had an extra 10-pound weight in it. If Mark dropped them nose-first, the aerodynamic shape of the bobsled would help it punch through the air more easily than the bowling ball. In theory, the heavier bobsled might land about a quarter of an inch ahead of the lighter one -- roughly the thickness of a cellphone.

When Mark's sleds hit the ground, they would be traveling about 65 mph. That's a snail's pace by bobsled standards. Olympic bobsled tracks are typically about twice as high as the Tower of Pisa, so the sleds reach much higher speeds, sometimes approaching 100 mph. Because air resistance increases at higher speeds, and because the long and winding course gives it more time to accumulate, its effect becomes significant in elite competition —which is why every pound matters.

In a sense, Galileo's experiment doesn't work, at least not on this planet. Two differently weighted bowling balls — or bobsleds — do fall at slightly different speeds, thanks to air resistance.

If both objects are extremely heavy, the difference in their falling speed becomes vanishingly small. If you had a pair of bobsleds made of solid lead, each weighing several tons, put an extra 10-pound weight on one of them and dropped them from the tower, they would land so close together that the tiny difference between them could only be seen with a microscope.

However, you would be wise to not try that particular experiment in Pisa.