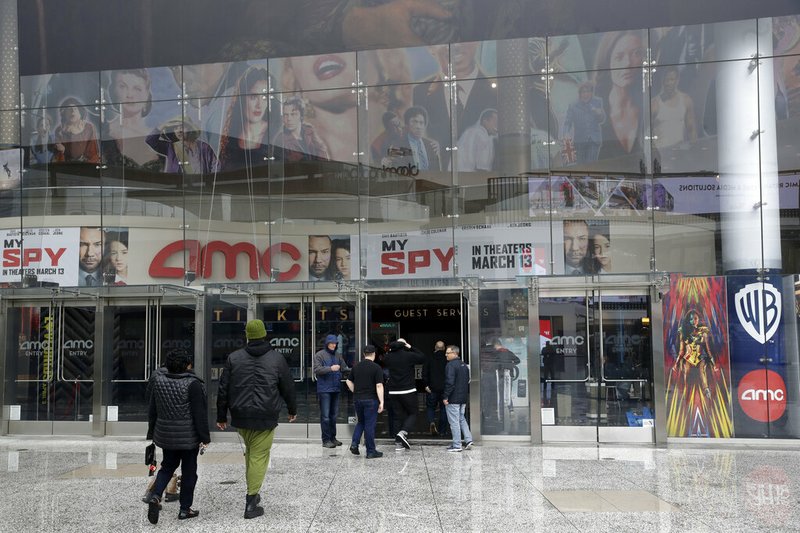 NEW YORK -- AMC Theaters, the largest movie chain in North America, will limit attendance at all screenings to 50 people to adhere to the CDC's latest social distancing guidelines.

Cinemas in New York City and Los Angeles on Sunday were order closed by the city's respective mayors. Many art house theaters nationwide have also shuttered. But the largest chains in North America -- AMC, Regal Cinemas, Cinemark -- have tried to keep their doors open. Over the weekend, the chains began to limit theater capacity to 50%. They have pledged to thoroughly clean theaters in between showings. AMC said in any theaters smaller than 100 seats, it wouldn't fill them more than half. Regal and Cinemark didn't immediately respond to messages Monday.

For most people, the new coronavirus causes only mild or moderate symptoms, such as fever and cough. For some, especially older adults and people with existing health problems, it can cause more severe illness, including pneumonia.

The vast majority of people recover from the new virus. According to the World Health Organization, people with mild illness recover in about two weeks, while those with more severe illness may take three to six weeks to recover.

Ticket sales plunged to their lowest levels in at least 20 years at the weekend box office for U.S. and Canadian theaters. Not since a quiet September weekend in 2000 has weekend box office revenue been so low, according to data firm Comscore. More people went to the movies the weekend after Sept. 11, 2001. Most of Europe's cinemas have shuttered in recent days, as have theaters in China, India, Lebanon and Kuwait.

Those closures have already slashed international grosses. Health officials are urging for those who can stay home to do so, to help stymie the spread of the virus. Much of the entertainment world has shut down. Broadway theaters, major museums and theme parks have closed their doors. Concerts have been called off: Elton John was the latest as Monday he announced dates in North America for his "Farewell Yellow Brick Road" tour from March 26 to May 2 would be postponed: later dates remain unchanged.

Festivals including South by Southwest in Austin, Texas, and the Tribeca Film Festival in New York have been canceled or delayed. Most live-action film and TV production has been put on hiatus. Hollywood also has postponed most of its upcoming releases.

Next week's most anticipated movie, "A Quiet Place Part 2," has been removed from the schedule. Other major releases, including Disney's "Mulan" and the James Bond film "Die Another Day" have been put off. That means that even if movie theaters remain open in the coming weeks, they will have little to play. Theaters could potentially play older films to help them get by.

The Associated Press receives support for health and science coverage from the Howard Hughes Medical Institute's Department of Science Education. The AP is solely responsible for all content.