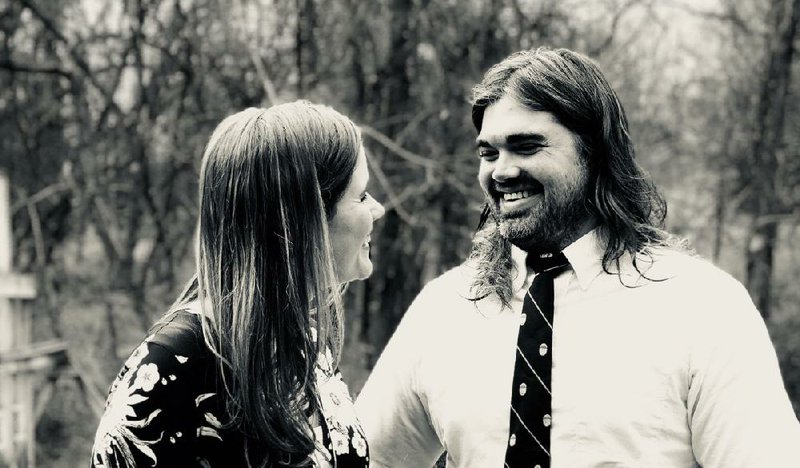 Rebecca and Noah Hansen thought it was kind of silly to call each other boyfriend and girlfriend when they were in high school and college, but that didn’t change how they felt about each other. “The big joke in our family is that there was never a label put on us until we got engaged. Apparently we were never boyfriend/girlfriend until we were fiancés,” says Rebecca. “But he’s always been my best friend.” (Special to the Democrat-Gazette)

Rebecca Smith and Noah Hansen grew up on opposite sides of the state, but they met in the middle when they went to a residential high school.

Noah grew up in Fordyce and Rebecca grew up across the state in Booneville. As juniors in high school in 2001, Noah and Rebecca went to the Arkansas School for Mathematics and Sciences in Hot Springs.

She says: “I saw him at an AEGIS camp, and I thought he was cute. Noah, to me, is just the epitome of the perfect man — he has the perfect smile and he makes you smile whenever you see him.”

She says: “I was just so excited. And after not putting a label on anything, I thought all of a sudden that marriage is important and now I have this person that I am saying that I’m with forever.”

He says: “For me, it felt like kind of the next adventure. It was a culmination of our relationship up to that point. We both wanted a family and we both wanted to work with children and I think it was just the moment that we could start the rest of our life.”

He says: “I think sometimes people consider a relationship to be 50/50, that you kind of go in halfway. I think the problem with that is that there are going to be moments that one or the other is not in a place where they’re capable to do that, so I think that for a marriage you have to give everything you have, whatever that is, all of the time.”

They met during a game of kickball they played over the first couple of days after they moved into the school's dorm, and Rebecca remembered Noah as one of the cute boys who went to summer camp with her sister. He didn't make the summer camp connection immediately, but he and Rebecca became fast friends.

They had some classes together, and they studied together -- or at least they claimed to -- on occasion and participated in various school activities together.

"There was a lot of spontaneity, given just our living situation at the time," Noah says. "So it would be like, 'Hey, let's go eat in the cafeteria,' or 'Hey, let's go walk around town.'"

Students were permitted to go out and about in groups of four during certain times when school wasn't in session, so they strolled often to Walgreens, the outer limit of their allowed zone. Their attraction was undeniable-- except they didn't really want to label it just yet.

"I was going to the Math and Science School to further my education, so I didn't want to date anybody," Rebecca says. "Things definitely progressed to that pretty quick, but I kept saying that we were just friends. Looking back at it, we were exclusive."

High school students everywhere want to hang out with friends on the weekends and students at the Math and Science School were no different, so it was typical for kids to take friends home with them on weekends when they had to leave school.

"Our parents were very gracious and set up some boundaries and got to know each other as parents and such where they felt comfortable, and I would go stay at his house and sleep on their couch, and he would get to come stay in our basement, some weekends," Rebecca says. "It was typically not just him. It was a group of friends, and we would go and stay at each other's houses."

Though neither of them was a huge fan of their high school football teams, the fact that his high school was playing hers was reason enough for them to go to a game together. So in October of their junior year, Noah went home with Rebecca.

It was while they were out for a walk around Rebecca's house the day after the game that they first held hands.

"At that point it was definitely flirtatious but there was still no discussion about anything relationshipwise," Rebecca says.

They dated -- or didn't date -- throughout the two years they were at the Math and Science School, and after graduation, Rebecca went to the University of Central Arkansas in Conway and Noah went to Colorado State University in Fort Collins, Colo. They were in constant contact while they were apart, and they spent their spring breaks together.

Following his freshman year, Noah spent two years in Argentina. When he returned home in 2006, Rebecca was there to meet him. The next day, the two of them and Noah's parents drove her home.

Noah had spent a great deal of time while he was in Argentina thinking about how he would propose to Rebecca when he got home.

He and his grandmother, a jeweler, had worked out through letters the design of the engagement ring he wanted to give her.

"We have this little book of the different designs and ... I would tell her to change something or do something different," Noah says.

He asked his mom to go to the Math and Science School and see if she could buy the bench where they shared their first kiss. When she got to the place where he told her the bench would be, it was gone. She tracked it down -- it had been dismantled and was about to be thrown away -- and brought it home to wait for Noah.

When Noah and his parents took Rebecca home to Booneville, he and his dad went out under the guise of playing basketball. Their actual mission involved reassembling that bench in the spot where Noah and Rebecca had first held hands. Later that day, he led Rebecca there and asked her to marry him.

Noah and Rebecca were married on Nov. 24, 2006, in Dallas, with a reception afterward at her grandparents' home.

They live in Little Rock and have three daughters -- Isabel, 9, Fiona, 6, and Naomi, 5. They are in the process of adopting a 4-year-old girl.

Rebecca is a stay-at-home mom, and Noah is vice president of preschools for Pediatrics Plus.

"The big joke in our family is that there was never a label put on us until we got engaged. Apparently, we were never boyfriend/girlfriend until we were fiancés," Rebecca says. "But he's always been my best friend." 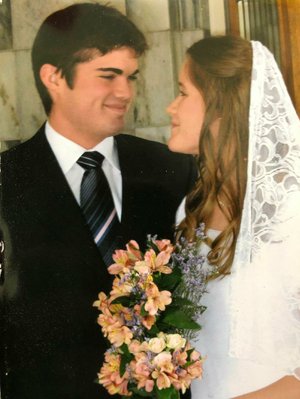 Rebecca Smith and Noah Hansen were married on Nov. 24, 2006. He had proposed with a ring his grandmother made, on the bench where they shared their first kiss, in the location where they first held hands. “It felt like kind of the next adventure,” says Noah. “It was a culmination of our relationship up to that point. ... It was just the moment that we could start the rest of our life.” (Special to the Democrat-Gazette/Rachel Smith Loerts)