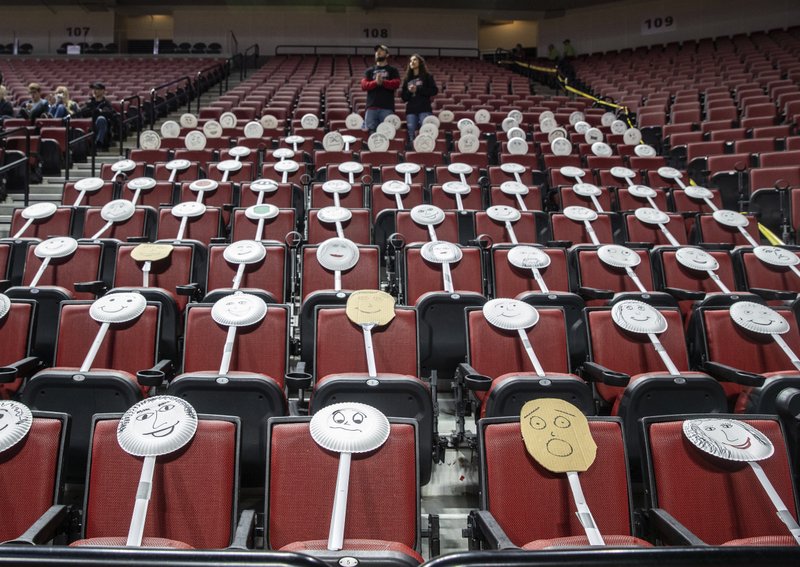 The Auburn fan section got creative by placing paper plate faces on the seats during the Class 1C boys high school basketball tournament championship game against Ogallala at Pinnacle Bank Arena, Saturday, March 14, 2020, in Lincoln, Neb. Crowds were limited to staff and immediate family due to concerns over the coronavirus. For most people, the new coronavirus causes only mild or moderate symptoms. For some it can cause more severe illness, especially in older adults and people with existing health problems. (Chris Machian/Omaha World-Herald via AP)

HARTFORD, Wis. -- There were no pep bands, no cheerleaders and only about 200 fans as the high school rivals faced off in a playoff game that might have drawn close to 2,000 in just about any other circumstance.

Instead, it was a small crowd that watched Brookfield Central and Brookfield East stage a double-overtime thriller Thursday night, not all that long after the NCAA canceled its beloved March Madness tournaments and professional leagues put their seasons on hold to combat the spread of the coronavirus. The two high school teams in southeastern Wisconsin simply treasured the opportunity to play at all.

"Every game we play from here on out, it could be our last game," Brookfield Central's David Joplin said after his 31-point effort in the 76-66 victory.

As it turned out, that's exactly what it was. Hours after the game, the Wisconsin Interscholastic Athletic Association canceled the rest of its high school basketball tournament, becoming the latest state to scrap a beloved rite of March for hundreds of communities across the country.

At least 33 states had canceled or postponed their basketball tournaments by late Friday night, including big states like Texas, New York and Ohio. The Arkansas Activities Association allowed four championship games to be played Thursday in Hot Springs, but Friday's and Saturday's contests -- a total of eight games -- were canceled. The California Interscholastic Federation called off play the day before San Domenico of San Anselmo was scheduled to play for a championship.

"We understand the situation, but we're just devastated," San Domenico Coach Mike Fulton said. "I thought we'd at least play with nobody in the stands. I've got guys crying, guys upset."

Instead of preparing his undefeated team for the state tournament, Ashland (Kentucky) Paul Blazer Coach Jason Mays spent Thursday trying to give his players a lesson in perspective.

"I said there are victims due to this virus," Mays said. "There's families that have lost loved ones and there's people that are losing revenue and job opportunities because of all these cancellations and suspensions of athletic events all across the country. There's people who have real-world problems because of this."

About a dozen states, including Florida, had completed their state tournaments before this week. The handful of states that didn't halt play were restricting the number of fans.

That created plenty of scenes like the one that took place at the Brookfield Central-Brookfield East sectional playoff game in Hartford, about 35 miles northwest of Milwaukee.

Each team was given just 88 tickets to distribute for a game that was moved from a 2,000-seat fieldhouse to a smaller gym. The smaller crowd did its best to produce a playoff atmosphere. Fans in the student sections stood throughout the game.

"I thought it was pretty special because the people we had here were people we invited -- family members, best friends," Brookfield East's Hayden Doyle said. "It's not a huge gym, but there was still a lot of energy in the gym throughout the game."

Even after Brookfield Central won, the Lancers sensed they might not get a chance to play again.

"You still kind of feel somewhere inside of you that this is all going to be coming to an end at some point," Brookfield Central Coach Dan Wandrey said.

Wisconsin was one of several states that canceled or postponed their playoffs after initially trying to continue with limited crowd sizes.

Jeffrey Collins, the executive director of the New Hampshire Interscholastic Athletic Association, said some potential playoff sites had policies that wouldn't have allowed any fans and some schools indicated they wouldn't have been able to play anyway.

"It was a confluence of a number of different factors," Collins said.

And no matter how much a state tried to limit the crowd size at its playoff games, the threat of spreading the virus remained.

"Who's to say of the 170 people who were here today, somebody doesn't have it?" Wandrey said after his game.

All those concerns created a sense of inevitability during the Brookfield Central-Brookfield East matchup that this might be the final game for both teams.

They paid attention to what the NBA and NCAA had done earlier in the week. They knew their event might be next.

"I'd be a little mad, but I understand that this is something nobody's playing around with," Joplin said. "We've got to make sure we're educated. If it's canceled, we know it's for the best." 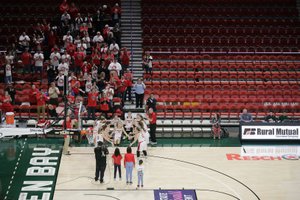