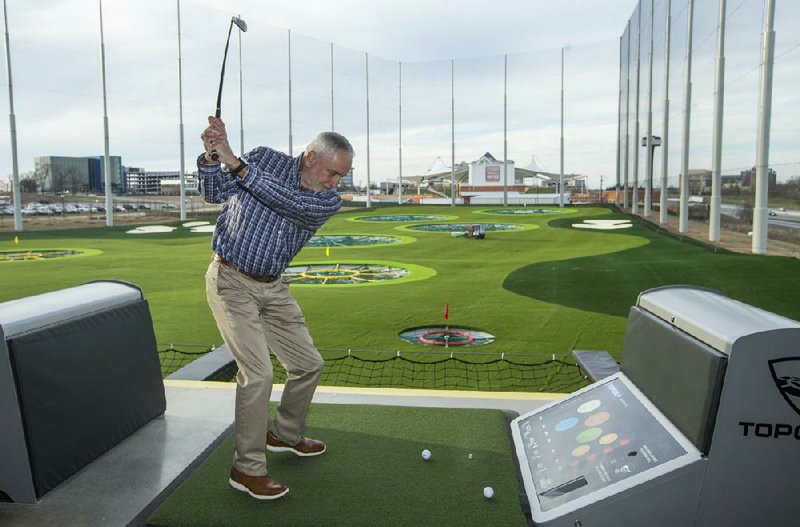 Rich Davis of Northwest Arkansas swings Wednesday during the Taste and Tour preview event at Topgolf Northwest Arkansas in Rogers. Employees of local businesses had the opportunity to sample what the venue has to offer before it opens to the gen- eral public later in March. Go to nwaonline.com/200312Daily/ for today’s photo gallery. (NWA Democrat-Gazette/Ben Goff) - Photo by Ben Goff

ROGERS -- Topgolf, a sports bar and virtual golf venue, is ready to open.

After introducing plans for the 11-acre site almost two years ago, Topgolf Entertainment Group has wrapped construction and plans to open in the coming weeks.

Topgolf's first location in Arkansas has two floors with 76 driving bays, a full bar and food menu, and a huge TV screen. It's in the Pinnacle Hills area on South J.B. Hunt Drive, near the Walmart Arkansas Music Pavilion.

"You don't have to be a golfer to come here," said Amy Gober, marketing manager of Topgolf Rogers. "Ultimately we are a sports entertainment venue that wants to create experiences for people and we're going to do whatever we can to make that happen."

Hundreds attended a preview night Wednesday and Topgolf provided free food, drinks and games. Music was blaring. Sports were on video screens. It felt like a weekend night.

Rob Dodd, executive vice president of operations at Nabholz Construction, was the first to swing a golf club at the venue. He hadn't been to a Topgolf before but said he always wanted to go.

"It's awesome," Dodd said as the sun was setting. "You get a great view with the AMP in the background."

Topgolf looks like a driving range but patrons can compete in a setup similar to bowling. In general, the goal is for players to hit golf balls to various targets. Between six and eight people can be in each driving bay and pay by the hour. The player with the most points wins.

"It's a lot of team building," said Amy Gober, marketing manager of the Rogers location. "It's a great date night experience. You're doing something that's kind of fun, out of the box, different, and when you hit those targets and you're a non-golfer, it's like hitting the lottery."

Golf balls have embedded microchips that record data for each stroke. Players can view points on one of three video screens in their bay. A tour guide said the other screens can be used for entertainment or as a display for a company logo.

The cost to play varies on the time of day, with rates increasing on weekend nights. The company also has half-price Tuesdays and college night Wednesdays where students can pay $15 for two hours. Gober said there are also special rates and discounts for memberships.

"If you look at it from the standpoint of splitting it between six or eight people, frankly it's really not that expensive an outing or activity," she said.

Topgolf was founded by twin brothers Steve and Dave Jolliffe in 2000, when they developed the first three locations in the United Kingdom. U.S. licensee WestRiver Group brought the brand to the states in 2005 with the opening of Topgolf Alexandria in Virginia. More investors have since come on board, opening dozens of locations across America.

In 2016, Topgolf International, Inc. adjusted its course and became interested in coming to smaller and mid-sized cities such as New Orleans, Huntsville, Ala., and Northwest Arkansas. The company debuted plans for the Pinnacle Hills area of Rogers two years later.

Carlos Rosas of Rogers and Faryl Boykin of Fayetteville, shared a driving bay at the far corner of the building on the second floor Wednesday night . It was their first time at Topgolf and said they had trouble getting into the swing of things. They also said it was easier being at a bay in the middle, where they could swing straight for the targets.

"I can see a lot of progression with each swing," Rosas said determinedly.

He and Boykin said it brought a lot of opportunities to the region. Rosas, a store manager for Sprint, said it makes Northwest Arkansas more of an attractive destination and "brings a lot of wholesome fun to the area" for an affordable price.

Boykin, of Fayetteville, said it doesn't matter what people are in town for, business or leisure, "it means another revenue stream for everything."