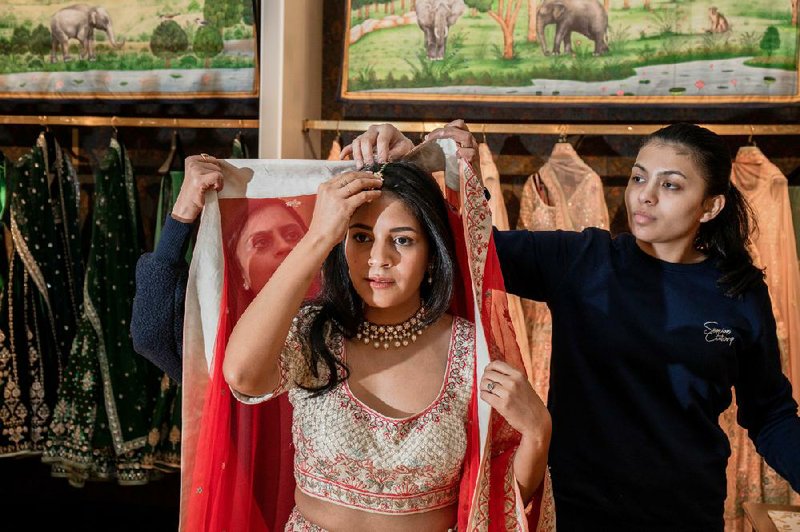 Brianna Barzola, who is of Latin-American descent, recently visits the Indian designer Anita Dongre’s store to shop for lehengas for her two forthcoming wedding ceremonies, where she is to marry an Indian-American man. (The New York Times/Natalie Keyssar)

NEW DELHI -- After an 18-hour journey from New York to New Delhi in December sandwiched between my parents, I wanted nothing more than to take a long shower and dive under the covers. But we were there on a mission, and time was scarce.

So, one brief pit stop at our hotel later, we were yawning in a car on the way to Chandni Chowk, a famously crowded market hawking everything from textbooks to hardware supplies. The maze of stalls is so sinuous that cars can only travel so far, at which point we clambered into an auto rickshaw and told the driver to head to Asiana Couture. I nervously hoped that it was as good a store as my distant cousins had claimed on our WhatsApp group chat.

Finally, at the end of a dimly lit alley lined with heaps of vibrant saris and the occasional stray dog, we found the store. And so began a frantic week of shopping for my bridal lehenga, aka my wedding dress.

The notion of shopping in India for my June wedding in Connecticut has struck many of my friends and work colleagues as unusual and even glamorous. But for many South Asian brides, as well as people marrying South Asians, this sort of high-pressure, whirlwind trip is a normal rite of passage in the lead-up to their weddings. Countless stores are visited where shopkeepers attempt to discern your tastes as they trot out garment after garment. Scratches may be left on your arms from trying on so many richly embellished clothes. Decisions have to be made quickly, which is a challenge because most stores do not allow photos.

"It was the most intense 10 days of my life," said Maya Eichler, a 31-year-old product manager at Uber in San Francisco, who shopped in Mumbai, India, before her wedding in June 2017. "Every hour was planned."

Jennifer Welch, a 30-year-old government employee in Washington, who married her Indian American husband last year, said that she and her in-laws planned a trip to Mumbai and managed to find two lehengas for their fusion wedding in just four days there. While she had fun, she noted, "a lot of chai got us through it."

Pop culture has made it easier to explain the color and customs of Indian weddings since the days of Bend It Like Beckham. There was Cece and Schmidt's wedding on New Girl, the People magazine spreads of Priyanka Chopra and Nick Jonas, and the lavish Isha Ambani wedding where Beyoncé performed. Rent the Runway recently started testing formal Indian garb for guests. But even as Indian weddings have entered the mainstream in the United States, and more first-generation Indian Americans get married, the options for bridal clothing in the United States are limited.

A quick tutorial in the garb: Wedding garments and colors can differ based on the region of India where brides are from, but many wear lehengas in shades of red, pink or orange for their ceremonies. These include a cropped top, flowing skirt and a sash known as a dupatta. It's common to wear lighter-colored lehengas or gowns for receptions and brightly colored lehengas or saris for prewedding events, like a Sangeet, which is an evening event centered on song and dance.

While the internet has expanded access to Indian attire, a wedding dress is one of those pieces of clothing that women reasonably prefer to see and try on in person. In the United States, that quest is often limited to small shops like Nazranaa on Oak Tree Road in Iselin, N.J., and stores that are essentially set up in family homes.

Anu Rajasingham, a 35-year-old public health engineer for the Centers for Disease Control and Prevention, visited one such home in the Atlanta area last year while searching for wedding saris from Sabyasachi Mukherjee. It was an unusual retail experience, she said, given that Mukherjee is one of India's top designers and the host of an Indian wedding dress show akin to Say Yes to the Dress. But the address was listed on the brand's website.

"We drove for 45 minutes and got to a very suburban-looking house, and all of us were like, 'Is this really it?'" Rajasingham said. "And then downstairs in her basement, she essentially had a mini Sabyasachi store."

When Rajasingham, who is of Sri Lankan descent, couldn't find the right white sari for her ceremony, she was told that she could receive images of the designer's forthcoming collection through WhatsApp photos and, upon making an order, share her measurements through Skype. Ultimately, though, it was a challenge to discern the outfits from grainy WhatsApp images, she said, motivating her to make a shopping trip to Chennai, India, and Sri Lanka.

These frantic searches have fueled a lucrative business for Indian designer Anita Dongre, who opened a 5,000-square-foot store in SoHo in Manhattan in 2017 to sell a variety of clothing. Now more than half her business is tied to wedding-related garb for brides and other Indian wedding guests.

"There are a few mom-and-pop stores in the U.S., but I would say we are the first Indian wedding wear designer brand there with our flagship in New York," she said.

Dongre, whose designs have been worn by Catherine, the Duchess of Cambridge, and Chopra, said she was inspired to expand her wedding collection into the United States by the women who traveled to her stores in India. She knew of the pressure to complete their shopping quickly, their concerns around fittings and the tight management of vacation days.

"Having our store and the brand there just makes it so much more convenient for them to come in," she said. "She can come in with her fiancé, the in-laws, and all of them can be part of that process of helping her choose a wedding lehenga, and it's a very special time."

The popularity of her wedding business has caught her by surprise and piqued the interest of other Indian designers. Calcutta-based Sabyasachi, for example, recently announced on Instagram that the label will be opening a New York flagship this fall, though the brand didn't respond to inquiries about how much wedding wear it plans to carry. It also announced a jewelry collaboration with Bergdorf Goodman.

It speaks to the scarcity of options in the United States that Dongre has been such a hit, given her steep prices. She said that her lighter, nonceremony lehengas start at $1,000, while bridal outfits rise to $5,000 to $7,000. (On average, women spend $1,600 on wedding fashion, from gowns to jumpsuits, according to a 2019 study by The Knot.) But Dongre has benefited from brides who are factoring in the potential cost of a trip to India with their families.

While Dongre sells the lehengas and measures brides in the United States, the garments are still tailor-made in India and then shipped back to her store.

When my parents and I traveled to India, as well as my older sister before me, we each took an empty suitcase. They stayed for an extra two weeks after I left -- a true act of filial love -- in order to take my bridal lehenga home. It took up an entire suitcase and, according to my mother, came in at 20 pounds of deep pink fabric and embroidery.

Many stores in India, from designers to regular boutiques, require at least 30 days to customize lehengas and may not ship goods. Eichler, who shopped in January for her June wedding, was told that her two Sabyasachi lehengas would be ready in three months, but she didn't have time to make another trip to India, and the store did not ship to the United States.

"That whole five months, my parents were constantly looking for who was going to India of all our friends living in the United States," Eichler said. "I had to coordinate all sorts of handoffs between uncles."

Until more options emerge for Indian bridal wear in the United States, the shopping trip to India and all its accompanying chaos remains the norm for many women. On Facebook, a roughly 2,200-member group for Indian American women planning weddings called "The Little Brown Diary" regularly lights up with recommendation requests for visits to Mumbai, Delhi, Ahmadabad and more, where they intend to buy their own clothes as well as outfits for family members and bridal parties.

Itineraries are hastily stitched together through tips and direct messages from strangers and references from loved ones, and then it's time to hope for the best and prepare for totally unpredictable events. For example, when my older sister, Dr. Deepali Maheshwari, traveled to Jaipur, India, ahead of her wedding in July 2016, there was a strike that shuttered every jeweler in the country. I managed to order my wedding lehenga just before protests over a contentious citizenship law made it virtually impossible for my parents to access Chandni Chowk.

In my case, I'm pleased to report that Asiana Couture was, in fact, as good as my cousin said it was. In fact, we ended up buying a lehenga that I tried on that first, exhausted night in Delhi -- but only after days of visiting a slew of other shops, to the chagrin of my patient father.

And even though I was halfway around the globe from home, fighting jet lag and wearing an outfit that had been lifted and tied onto me by no fewer than three people -- I still felt that common spark that most of my friends describe when they buy their wedding dresses as I exchanged a tearful hug with my mother. 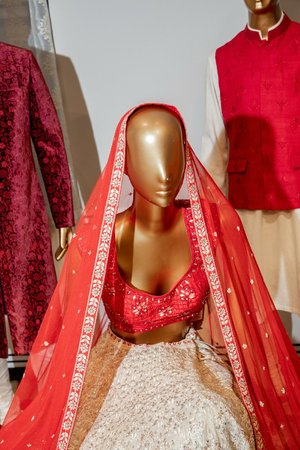 Designs on display in Anita Dongre’s store in New York. Dongre, who designs Indian garments for all occasions, said more than half of her business is now tied to wedding-related garb for Indian brides and wedding guests. (The New York Times/Natalie Keyssar)