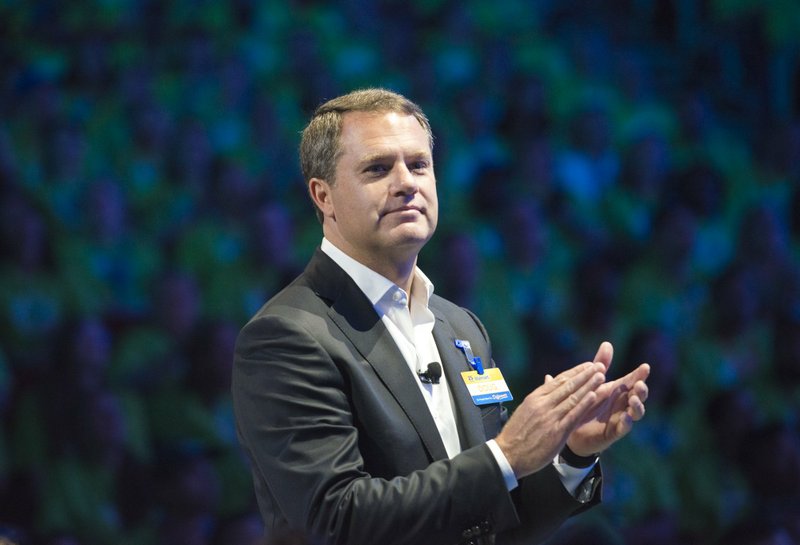 In this file photo Doug McMillon, president and CEO of Walmart Inc., speaks during the annual Walmart shareholders meeting, Friday, June 1, 2018 at Bud Walton Arena in Fayetteville. McMillon said Walmart had been asked to make portions of its store parking lots available in specific locations with the intention of scaling up over time as supplies of the coronavirus tests become more readily available. (NWA Democrat-Gazette/CHARLIE KAIJO)

WASHINGTON -- President Donald Trump announced Friday that the government is partnering with private companies to set up drive-thru coronavirus testing sites -- one of a series of steps the administration launched to boost U.S. testing availability in the face of heated criticism from lawmakers and frustrated Americans unable to find out if they are infected.

The Trump administration also approved a commercial test that will allow labs around the country to begin processing as many as 4,000 samples a day and introduced an emergency hotline for laboratories.

At a Rose Garden news conference, the president said the push to let people get tested from their cars will involve big-box companies and drugstores, as well as state and local health departments.

Chief executives of Target, Walgreens, Walmart and CVS pledged during the news conference to make space available in their store parking lots for the drive-thru testing. Officials said people seeking tests would be able to drive up and get swabbed by state health workers and members of the U.S. Public Health Service, then have the sample sent to a diagnostic lab, which will run the tests and report results in 24 hours. Officials suggested that the effort could start as soon as Sunday.

It was not immediately clear what the drive-thru tests would cost or who would pay for them.

During the news conference, Doug McMillon, president and chief executive officer of Bentonville-based Walmart Inc., said his retailer would do its part by assisting in plans for drive-up testing.

McMillon said Walmart had been asked to make portions of its store parking lots available in specific locations with the intention of scaling up over time as supplies of the coronavirus tests become more readily available.

"We'll stay involved and do everything we can from a supply chain point of view to be of assistance," McMillon said.

[Video not showing up above? Click here to watch » https://www.youtube.com/watch?v=QsMQ6oyot-I]

Walmart Inc. has 4,756 Walmart-branded stores in the U.S.. The company employs about 1.5 million people in the U.S. and a total of 2.2 million globally.

"Our focus has and always will be the well-being of our associates and customers, and we are pleased to help serve our nation during this unprecedented time," said a Walmart spokesman in a emailed statement. "When the government approached Walmart, we pledged our support to help the drive-thru testing in communities impacted by covid-19. We are currently working with the federal government to finalize details."

Walmart shares closed at $114.10, up $10.05 or nearly 10% in trading Friday on the New York Stock Exchange. The broader market responded favorably to Trump's move, sending the Dow Jones Industrial Average up by nearly 2,000 points, its largest single-day gain ever.

Other top retail executives participated in the news conference, including Brian Cornell, CEO of Target Corp., and Richard Ashworth, president of Walgreens.

"It should come as a surprise to no one that the U.S. government has reached out to the retail industry for assistance in this time of crisis," CEO of the National Retail Federation Matthew Shay said in a statement responding to Trump's action. "Our retail leaders stand at the ready to react and respond to help ensure the security and safety of employees and consumers alike in the communities they serve."

"We don't want everyone running out -- only ... people with certain symptoms," the president said. He predicted that the drive-thru tests and other new measures would "vastly increase and accelerate our capacity to test for the coronavirus."

The president announced that Google is developing a website, through which a person will be able to fill out an online questionnaire, including any illness symptoms and other circumstances, and be told whether he should get a test.

On Friday morning, Dr. Anthony Fauci, director of the National Institute for Allergy and Infectious Diseases, told television networks in interviews that he expected testing to ramp up. "Within a week, we're going to start seeing a real acceleration of testing," Fauci told MSNBC. "I think we are going to see a much different situation than we saw just a few weeks ago."

Democratic and Republican lawmakers have repeatedly pressed administration health officials on why the U.S. has not set up a model similar to that in South Korea -- a country with a large covid-19 outbreak -- in which drive-thru testing sites are widely available and do not require doctors' prescriptions, and results are available rapidly.

The virus is highly contagious, and experts have urged the government and hospitals to figure out how to set up testing methods that will keep potentially sick people out of hospital emergency rooms and doctors' offices.

The administration's push to boost drive-thru testing comes as several places around the country have begun ramping up such services. The Mayo Clinic opened such a facility this week, according to Jack O'Horo, a Mayo infections disease specialist. "This helps to protect other patients and staff from potentially coming into contact with the covid-19 virus," he said.

New Rochelle, a New York suburb that has been designated a coronavirus containment zone after an outbreak there, on Friday became the first East Coast site with drive-thru testing. Residents can make appointments by phone and then be tested from their cars in a six-lane site set up by the state's health department. Swabs are sent to BioReference Laboratory, which will contact people with their results.

Colorado's health department also has launched a drive-thru site in Denver, requiring patients to provide doctors' notes saying that they need tested. Such sites also are available in Oahu, Hawaii, and Hartford, Conn.

In other measures announced earlier Friday, the Food and Drug Administration has created a 24-hour emergency hot line for laboratories that are having difficulty getting materials or are finding other impediments to running tests.

In addition, the Department of Health and Human Services assigned Brett Giroir, the assistant secretary for health, to coordinate all covid-19 testing efforts among federal public health agencies, including the FDA, the Centers for Disease Control and Prevention, as well as state and local health departments, and public and private clinical laboratories.

The FDA enlisted Roche Diagnostics, a Swiss health care giant, in the testing effort, giving the global drug manufacturer emergency permission to sell to labs the first commercially approved test for the coronavirus in the United States. That should help expand the scope and speed of coronavirus screening.

"These actions today show our commitment to working around the clock to help expedite the availability of tests," Dr. Stephen M. Hahn, the FDA commissioner, said in a statement.

In an interview, Dr. Thomas Schinecker, chief executive of Roche, said developing such a test normally takes years. Several other testing companies, including Hologic and Cepheid, have also said they are developing commercial tests for the virus.

With the approval, he said, "we can really do a lot more testing in a much shorter period of time."

The company has been installing new equipment around the country in anticipation of the FDA approval, and Schinecker said all of the major U.S. testing companies already have the Roche testing systems.

The news of Roche's participation came as the Department of Health and Human Services announced that it would award more than $1 million to two other companies, DiaSorin Molecular and Qiagen, to speed up the development of one-hour tests.

Another senior administration executive said officials were starting to collect data from private laboratories on the number of tests they performed daily. The administration has been repeatedly criticized for knowing the volume of tests performed by the CDC but not a nationwide total from all of the state, local and hospital labs involved in coronavirus testing.

Information for this article was contributed by Amy Goldstein, Laurie McGinley and Yasmeen Abutaleb of The Washington Post; by Noah Weiland and Katie Thomas of The New York Times; by Josh Wingrove and Caitlin Webber of Bloomberg News; and by John Magsam and Frank E. Lockwood of the Arkansas Democrat-Gazette.