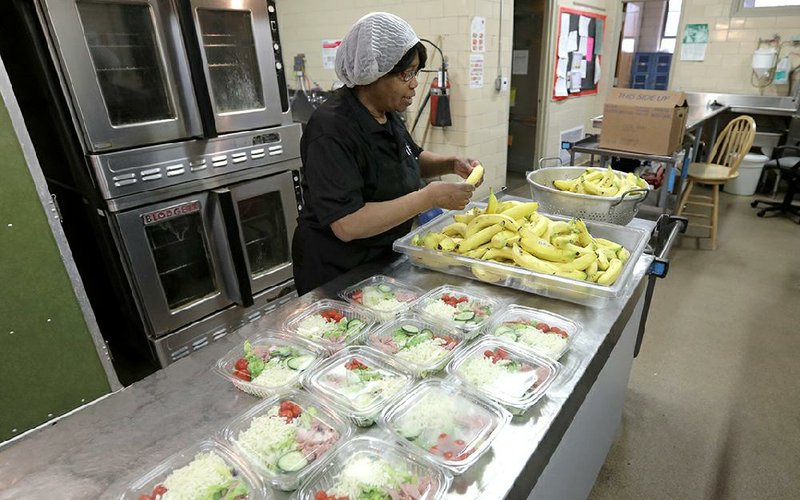 FAYETTEVILLE -- Northwest Arkansas' largest school districts are making plans to feed their students if they're forced to close because of the coronavirus.

Meeting student nutrition needs in the event of school closings is "very important and a part of the district's plan," according to a letter by Fayetteville School District Superintendent John L Colbert.

Fayetteville is requesting approval from the U.S. Department of Agriculture to implement a feeding program if schools close. That program, if approved, will provide free "grab and go" lunches at Owl Creek School and through the district's food truck for anyone 18 or younger. Food truck locations will be announced later, according to Colbert.

The Springdale, Rogers and Bentonville districts are working on similar plans.

Arkansas public schools are required to remain open until a directive to close is received from the state. The secretary of health, in consultation with the secretary of education, has sole authority to close schools for reasons related to the coronavirus.

On Thursday, Gov. Asa Hutchinson directed public schools -- including charter schools -- in Pulaski, Grant, Saline and Jefferson counties be closed until March 30. The schools would have been closed March 23-27 anyway for spring break.

The governor issued the directive after six people with homes, jobs, school and other contacts in the four-county area tested positive for coronavirus or covid-19, contingent on final verification from the federal Centers for Disease Control in Atlanta.

Arkansas Secretary of Education Johnny Key told the state Board of Education on Friday no additional school districts had been identified for closing as a way to reduce exposure to the virus.

He urged schools that are open to continue to be places of calm refuge for students, and he expressed appreciation for teachers and support staff members who are providing that reassurance to students.

Key also emphasized only the governor has the authority to direct school systems to close because of covid-19. That's in contrast to the standard practice of school system leaders making decisions independent of state government to close schools for inclement weather, illness such as the flu or utility outages.

School system leaders who have questions about whether to remain open should first contact an Arkansas Department of Health hot line about their situations. Experienced educators have been assigned by Key to the Health Department to help field the calls and assess the information -- even through this weekend, Key said.

"A preemptive closure of a school may not be the best option," Key said. "A premature closure impedes our ability to get the right information to the Health Department so they can make medical- and scientific-based decisions."

Leaders of the closed districts and charter schools in the four counties do have the authority to decide whether to require students to do school assignments at home -- using either online or prepackaged lessons and in consultation with their teachers -- who are also working from their homes.

A school district's state-approved Alternative Method of Instruction plan, authorized by state law, enables students and teachers to work from their homes at times when schools have to be closed without having to make up the day on a school holiday or at the school year's end. The plans can be used for up to 10 days of the 178-day school year.

Many students rely on the meals they receive at school. Nearly half of all students combined in the Bentonville, Fayetteville, Rogers and Springdale districts participate in the National School Lunch Program, a federally assisted meal program operating in public schools.

During an unexpected closing, schools can leverage their participation in one of the U.S. Department of Agriculture's summer meal programs to provide meals at no cost to students. Under normal circumstances, those meals must be served in a group setting.

In a public health emergency, however, the law allows the department to waive the group-setting meal requirement, which is vital during a social distancing situation, according to the department's website.

The Rogers School District submitted its waiver request Friday. District officials are expecting to get a response by early next week, said Assistant Superintendent Sharla Osbourn.

Rogers' plan is to establish at least four sites where children can come pick up a lunch, Osbourn said.

Bentonville School District also will offer free meals for anyone 18 or younger to pick up during lunch time Monday through Friday at one school and four other locations in the community, according to district communications director Leslee Wright. The pickups will be organized in a drive-through, or walk-through format.

The schedule with pickup times and locations will be posted on social media and the Bentonville district's website. In addition to being served lunch, each person will receive a breakfast meal to be eaten the following day.

Springdale would provide breakfast and lunch as well in the parking lots of at least some schools, said Rick Schaeffer, the Springdale district's director of communications.

The Samaritan Community Center delivers snack packs to Northwest Arkansas public schools each week for underprivileged children to take home with them each weekend.

If schools are closed next week, the Community Center plans to distribute snack packs from 9-11 a.m. Thursday at its locations in Rogers and Springdale, according to Bryan Armlovich, snack packs coordinator.

Businesses are also pitching in to help. The owners of the restaurants Big Sexy Food and Sammich Love, both in Springdale, have pledged to provide food for any family affected by school closure, according to their Facebook post Friday.

"We assume that school districts will do what they can but we also assume that will be limited for a wide range of reasons," the post stated.

The post encouraged people to quietly let employees know they had heard about the restaurants' offer and "we will make sure you and your family get a meal."

JJ's Grill, which has five locations in Northwest Arkansas, also announced it would give all students getting free or reduced-price meals at school a free kid's meal if schools close because of coronavirus concerns.

McDonald's restaurants of Northwest Arkansas announced Friday it will provide a free breakfast to all students in third through eighth grade from 6-9 a.m. April 6, the first day of state testing.

Students must be accompanied by a parent or guardian. Teachers with a valid school identification also are eligible for the free meal. The offer is available for dine-in customers only.

"We are committed to supporting our community and want our students to be as successful as possible on these very important tests. That's tough to do without a healthy breakfast," said Bill Mathews, local McDonald's owner and operator.