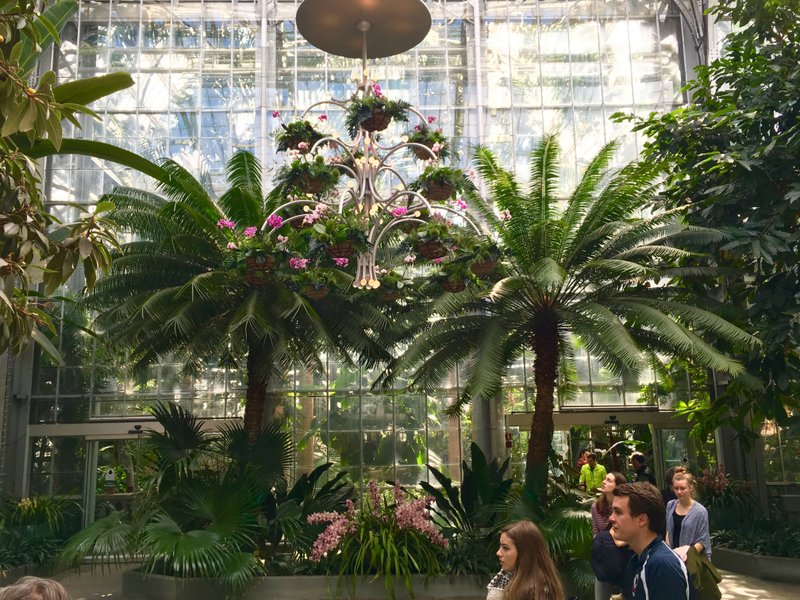 Some 30 years ago, I wanted to write a letter that had to be word-perfect, and I needed a place that was quiet, tranquil and verdant to do so. I found the perfect spot: a bench in the Palm House of the U.S. Botanic Garden.

This was the central high glasshouse in the heart of the ornate conservatory, built on the southwest side of the U.S. Capitol in the early 1930s. As I was composing my letter, the Palm House around me was decomposing. The Art Deco superstructure was so corroded that it may not have survived a hurricane.

I wasn't aware of this peril at the time; I just thought it was great to have the place to myself, more or less. The few visitors seemed to be walking around in a bemused state, as if they had just stumbled across some lost world. The lush decay, to the extent it was palpable, just seemed to add to the sense of exotic discovery.

Today, I wouldn't take my stationery to the Botanic Garden. It is no longer off the beaten track but is the beaten track, attracting more than a million visitors a year. On weekends, it is busy with people; for the holiday displays and special shows, it is crowded. The people are of all ages. They are from the metropolitan area and across the country and across the world.

The Botanic Garden is not a Smithsonian museum and is not technically on the Mall, although it is across Third Street SW from the National Museum of the American Indian. It falls under the domain of Congress, which has turned out to be propitious since its '90s nadir.

The Palm House was closed and dismantled in 1992. Five years later, the entire conservatory complex around it was shuttered for a complete, four-year restoration, including its all-important climate-control systems. The redesigned and replanted central house has been renamed the Tropics to reflect the totality of its flora, and the secondary glasshouses rationalized by specific plant habitats. 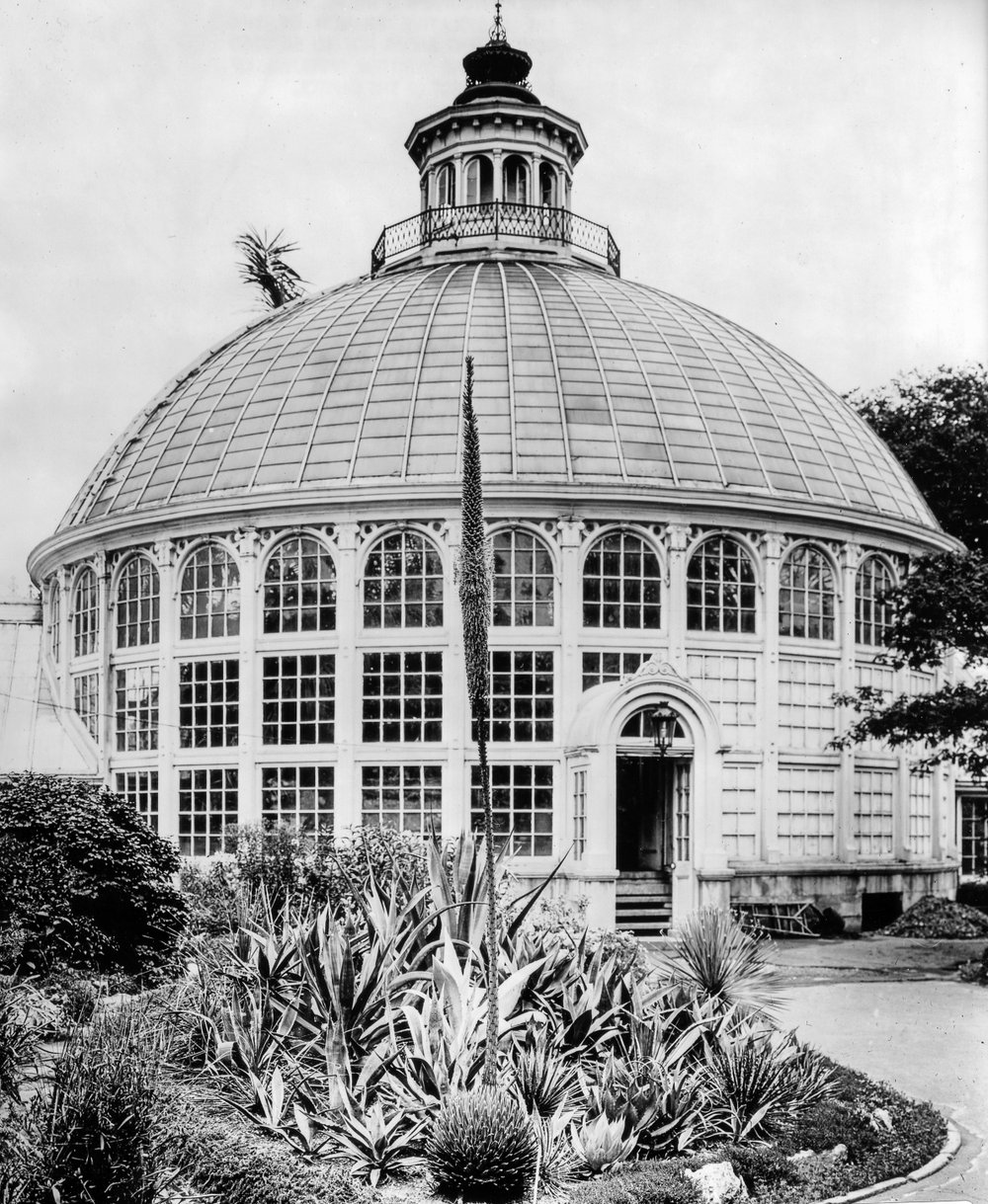 The former conservatory was built soon after the Civil War and stood until the early 20th century. (U.S. Botanic Garden/via The Washington Post)

On the west side of the conservatory, a once-vacant site is the location of the three-acre National Garden, which includes formal and naturalistic water gardens, a rose garden, an outdoor amphitheater/classroom and a sophisticated garden of native trees, shrubs and perennials and their cultivars, which continues in borders outside the railing fence. Funded by a nonprofit, the National Fund for the U.S. Botanic Garden, it opened in 2006.

Across Independence Avenue, Bartholdi Park has seen its elaborate monumental fountain restored and the landscape reconstructed and replanted as a series of rain gardens.

Recent repairs to the leaking roofs of the conservatory galleries are now finished and feature a 5,000-square-foot green roof planted in October with succulents and grasses.

The garden has an extensive range of behind-the-scenes greenhouses in Southwest Washington, where gardeners care for its plant collections and raise new plants for display. The production greenhouses, though not ancient, are aging, and plans are underway to rebuild them and use the site for more of the garden's educational programs.

In sum, the U.S. Botanic Garden is on the ups. In a town where we now rely on philanthropists to fix up the nation's decaying monuments, this is something to celebrate.

A ZOO FOR PLANTS

The Botanic Garden was granted its congressional charter during the administration of James Monroe and thus was formed before the Smithsonian Institution, the Agriculture Department, the age of steam locomotion and before the scientific revolutions of evolution and genetics. The idea of a botanic garden was espoused by George Washington, who understood that a such a place — basically a zoo for plants — would be of scientific and practical value but also a cultural marker for a new nation.

The bicentennial "is a huge milestone for us," said Saharah Moon Chapotin, executive director. "It's a chance to celebrate everything we have done and to show where we are going next, so it feels like a real turning point."

She is seeking to expand the garden's scientific role, including sending staff on wild-plant-collecting trips, in the United States and abroad, and its horticulturists are involved in native orchid research and conservation. She also wants to expand programs for underserved parts of the city and build on efforts to use the garden for horticultural therapy. 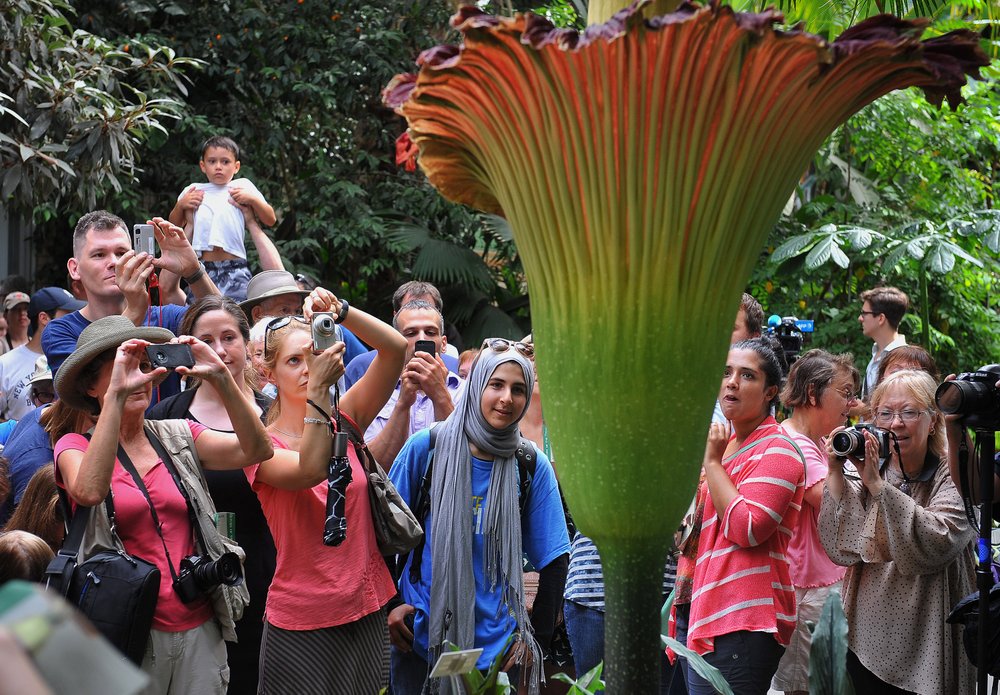 The periodic appearance of the titan arum, or "corpse flower," is a crowd puller at the United States Botanic Garden. This one went on display in July 2013. MUST CREDIT: Washington Post photo by Matt McClain

At the production greenhouse site, "we would love to have a place where people can see what it's like to grow food in the urban environment," she said. "We have identified space where we can put in an urban farm."

Open until May 3, the Botanic Garden's annual winter-into-spring orchid show (in collaboration with the Smithsonian), is a reminder that although plants give us life and food and comfort, they are also the source of beauty and pleasure. And for scribes, one hopes, inspiration.

What inspires me these days is the sight of young people in the conservatory — in their teens and 20s, and there are plenty of them — because their presence belies the idea that, in our digital and urbanized age, we are raising generations disconnected from nature.

To the extent that people of my generation forgot that plants bring us such things as bread, chocolate, aspirin and rubber, not to mention the oxygen we breathe — future generations don't have the luxury of such indifference or ignorance.

One thing has changed fundamentally since the Botanic Garden opened. In the early 19th century, the world seemed vast and wild, so untamed to the Western mind as to be wondrous, frightening and indestructible. It now seems a lot smaller and far more fragile.

When the Botanic Garden opened, visitors came to be awed by the wonders of the plant world and to figure out how it could serve us. Now, we go to consider what we can do for these plants and the shrinking worlds they come from. The public money spent on such a place seems a pretty good investment to me.

For more information, go to usbg.gov.