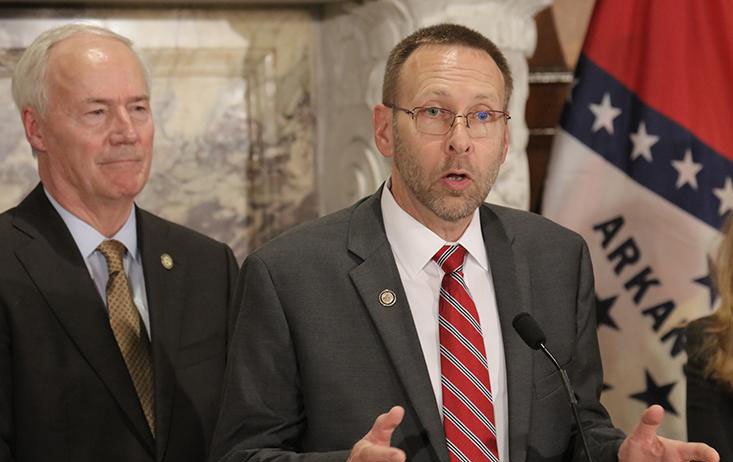 An additional five Arkansans -- including a medical school resident and at least one child -- have tested positive for the new coronavirus, raising the number of people in the state known to be infected to six, state officials announced Thursday.

The newly identified cases prompted officials to close public schools for the next two weeks in Pulaski, Saline, Jefferson and Grant counties -- counties where officials said the infected people live, go to school or have family members.

"That allows us time to get a handle on this," Gov. Asa Hutchinson said at a news conference at the Capitol after announcing the newly identified cases. "It allows us to do the checking that is necessary, but it is an abundance of caution for those children that would be going to those schools that might have some distant connection with an exposed individual there in that area."

The closures and newly identified cases arose a day after Hutchinson declared a public-health emergency on the same day the state's first patient tested positive for covid-19, the illness caused by the virus.

Hutchinson said the new cases were "not a surprise, but it is also a signal that we have to take additional steps and action."

He said the state has ordered additional protective equipment for health care providers and is working to increase its testing capacity.

For now, he said, decisions about whether large events should go forward remain up to local officials and event organizers.

"Whenever you look statewide, it's not right for us to mandate statewide that an event in Jonesboro is going to be canceled," Hutchinson said.

Cam Patterson, chancellor of the University of Arkansas for Medical Sciences, said it's reasonable to hold small gathering in areas without identified cases.

On the other hand, "if you've got a gathering of 1,000 people that are coming from all over the United States, and you don't know where they're coming from, that's probably an event you don't want to have happen right now."

The patient who tested positive for the virus on Wednesday is hospitalized at Jefferson Regional Medical Center in Pine Bluff.

Department of Health Director Nate Smith said Thursday that patient is believed to have contracted the virus while celebrating Mardis Gras in New Orleans.

Four of the people who tested positive overnight, including a resident at UAMS, had contact with that patient, Smith said.

Except in the case of the medical school resident, those contacts all occurred before the patient was admitted to the hospital, Health Department spokesman Meg Mirivel said.

Smith said the fifth person who tested positive is believed to have contracted the virus from an infected person outside Arkansas.

He said the UAMS resident worked a rotation at Arkansas Children's Hospital after the contact with the Pine Bluff patient.

UAMS spokesman Leslie Taylor said she understood the resident had contact with the patient Saturday, the day the patient was admitted, and then began a rotation at Children's Hospital on Sunday.

Patterson said the Pine Bluff patient didn't initially have a fever or other "symptoms that were typical of covid-19, so that was why that condition wasn't initially considered."

While she didn't have details on whether masks or other protective gear were used, Taylor said, "I don't believe they were using the type of personal protective equipment health care providers would normally use if you knew you were treating a coronavirus patient."

The Health Department and Children's Hospital said they were working to identify and isolate staff members and patients with whom the resident had contact, including patients who were subsequently released from the hospital.

The five people newly identified as having the virus are all under quarantine at their homes, Smith said. The state's six positive test results are all considered "presumptive" until confirmed by the U.S. Centers for Disease Control and Prevention, although Smith said he's confident in his lab's results.

People who had significant contact with a person known to be infected are being quarantined at home, and those who have symptoms are being tested, Smith said.

Tests were being conducted on 20 people as of Thursday and an additional 135 people were under home quarantines. Many of the quarantines were of people who recently returned from countries such as China or Italy where there are large coronavirus outbreaks.

UAMS and Arkansas Children's Hospital canceled all classes and student programs, including clinical rotations, and said they would conduct health screenings of all their employees. Visitors will be limited to one per day at UAMS Medical Center and two per day -- to allow parent visits -- at Arkansas Children's. UAMS said it also would be screening visitors.

The virus first emerged in Wuhan, China, late last year and has since spread across the globe and to most states within the U.S.

It spreads through respiratory droplets emitted when people sneeze or cough. The symptoms, including fever, cough and shortness of breath, have been mild for most people but severe or even deadly for some. The elderly and people with underlying health conditions considered most at risk.

While the state Health Department can test only about 20 patients per day, UAMS has purchased equipment that will allow it to test about 100 per day.

UAMS' Patterson said the hospital expected to receive the equipment on Thursday and then begin validating the test, which will take four or five days.

Smith said the Health Department can probably double the capacity of its own lab, but that he expects much of the routine testing to be done by large private laboratories, such as LabCorp of Burlington, N.C., that began offering testing in the state this week.

The department's own tests will be focused on people with symptoms who had contact with someone known to be infected.

On Thursday afternoon, UAMS started a drive-thru clinic on the ground floor of a parking garage at Shuffield and Jack Stephens drives on the hospital campus in Little Rock.

A doctor and nurse at the clinic ask people questions, take their temperatures, and refer them for testing when appropriate, Taylor said.

The clinic, which will be open 8 a.m. to 9 p.m., had already seen its first patient within a half hour of opening at 4 p.m., Taylor said.

Through its website, at uamshealth.com/healthnow/ the hospital also is offering free screenings and video examinations around the clock for people who think they may have the virus. Children's Hospital chief executive Marcy Doderer said parents with questions can speak to a nurse by calling (800) 743-3616.

"If an individual is concerned about the possibility of having covid-19 infection, or they have questions about this, the last two places that they probably want to be are in an emergency room or a crowded clinic," Patterson said.

Shortly after officials spoke at the Capitol about the spread of coronavirus, the secretary of state's office announced an indefinite restriction on public access to the building.

The General Assembly plans to continue with its business, though in-person access to meetings may be limited, state officials said Thursday.

Senate President Pro Tempore Jim Hendren, R-Sulphur Springs, had met and will continue to meet regularly about how the Legislature should proceed.

Today's meeting of the Joint Performance Review committee was canceled after Secretary of State John Thurston announced that the Capitol was closing to the public, but Hendren said next week's committee meetings will continue as planned.

The General Assembly's fiscal session, Hendren said, also is planned to start as scheduled April 8. Physical access to meetings, he said, may be limited, but he noted that floor sessions and committee meetings are available online.

"It's going to have an impact. The question is how much?" Hendren said. "If the Health Department says we need to avoid meetings of that size, we do have the ability to have a meeting without the public. Obviously, we'd need staff and individuals there to give testimony. We'll ensure that there's still access and transparency."

The state Capitol's closure follows similar shutdowns of public facilities around the country, including the U.S. Capitol in Washington.

The secretary of state will not accept walk-in visitors at its business and commercial services offices in Little Rock and Fayetteville. However, business services can still be conducted over the phone or online, according to a news release.

Arkansas Attorney General Leslie Rutledge said her office would continue providing all services, including any court appearances, but its office would be closed to the public. Those needing assistance should contact the office by phone or visit its website.

The state land commissioner's office will close to walk-in visitors, but it will continue business operations, according to a spokesman.

The state auditor's and treasurer's offices released statements Thursday saying that both offices had contingency plans in place ensure the state's fiduciary responsibilities aren't interrupted in the case of an outbreak.

Kevin Niehaus, a spokesman for Thurston's office, said that legislative meetings held in the Capitol would be closed to the public as long as the building remains closed.

Next week, the Arkansas Legislative Council and its committees are scheduled to meet throughout the week. The Legislative Council oversees state government functions when the General Assembly is out of session; for example, approving rules and requests for emergency fund transfers.

Some of those meetings are held in the Multi-Agency Complex, a separate building on the Capitol grounds commonly called Big MAC, which Niehaus said does not fall under the closure of the Capitol.

Marty Garrity, director of the Bureau of Legislative Research, which oversees the Multi-Agency Complex, said that as of Thursday afternoon, the meetings there were expected to be open to the public.

Cecillea Pond-Mayo, chief information officer for the House of Representatives, said there could be "some schedule changes next week," but right now, today's Joint Performance Review is the only meeting that has been canceled.

The General Assembly will convene as a whole next month for its fiscal session. Fiscal sessions, which were created by Amendment 86 to the Arkansas Constitution in 2008 in a statewide referendum, occur in even-numbered years.

Unlike regular sessions, fiscal sessions are strictly tailored to address only budget bills unless two-thirds of both chambers vote on a resolution to allow the consideration of a non-budget bill.

Fiscal sessions last only 30 days unless three-fourths of both chambers vote to extend the session by 15 days.

Fiscal sessions begin on the second Monday in February in normal years, but the Legislature passed a law last year to move up Arkansas' primaries in presidential election years. In such years, the fiscal session begins on the second Wednesday in April.

Hendren said he didn't think the session could be delayed.

"That's set by statute," Hendren said of the fiscal session. "We don't really have any flexibility to change that. I think we can do what we need to do."

Information for this article was contributed by Michael R. Wickline and John Moritz of the Arkansas Democrat-Gazette.