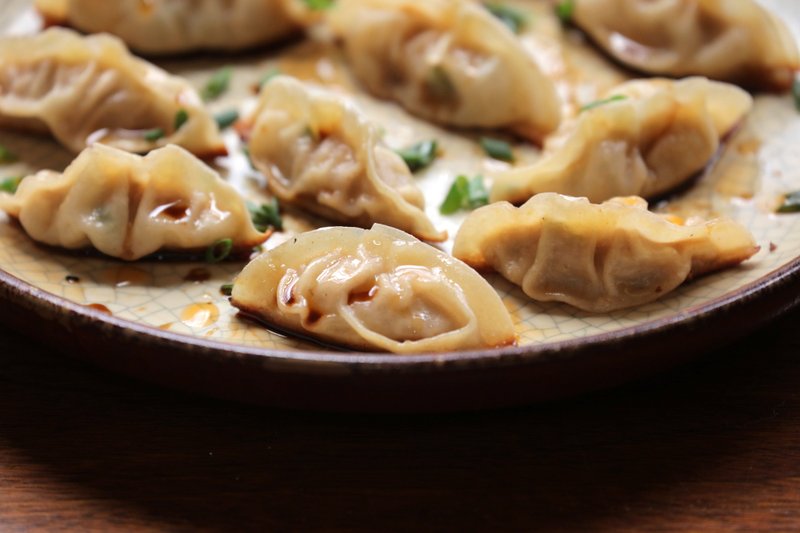 These Chicken-filled potstickers made with store-bought wonton wrappers and topped with a drizzle of soy sauce, chile oil and minced chives. (Arkansas Democrat-Gazette/John Sykes Jr.)

Pierogi, ravioli, momo, wontons, baozi, jiaozi — these are just a few of our favorite filled dumplings.

It would be impossible to write about them all. So for this story, we're focusing on Asian dumplings that do not require any special equipment (sorry, ravioli fans) and easy-to-find ingredients (sorry, no sticky rice dumplings today).

While most filled dumplings' roots can be traced to China, many food historians believe dumplings were created by multiple cultures independently.

Scanning ingredients lists, it's easy to see jiaozi (China), gyoza (Japan) and momo (South Asia) are branches of the same family tree. Manapua are the Hawaiian cousins to baozi (China). In the Philippines, these filled breads are known as siopao.

What's a jiaozi and those other ones, you ask?

First, let's define dumpling. Wai Hon Chu and Connie Lovatt, authors of The Dumpling: A Seasonal Guide, define a dumpling as "a portion of dough, batter or starchy plant fare, solid or filled, that's cooked through wet heat and is not a strand or a ribbon."

Andrea Nguyen, author of Asian Dumplings: Mastering Gyoza, Spring Rolls, Samosas, and More, for the purposes of her book, defines dumplings as "dishes that are either made from balls of dough or are small parcels of food encased in pastry, dough, batter, or leaves."

Wontons, jiaozi and baozi are basic types of Chinese dumplings. Wontons are typically served in broth; while jiaozi are steamed or pan-fried (potstickers), and baozi (steamed buns) are made from yeast dough. Gyoza are similar to jiaozi.

Baozi are delicious made with any of the fillings below, or fill them with (leftover or prepared) sauced pulled pork or beef barbecue.

For jiaozi, gyoza and momo you have the option of using homemade or bought wrappers. Both have their pros and cons. Store-bought wrappers save time, but are not as pliable as homemade.

Wonton skins (thinner, square) and gyoza (thicker, round) are the most readily available and, while not perfect, can be used interchangeably with varying results. Both are available in the refrigerated case at Asian markets. Wonton wrappers can be found at many supermarkets. To substitute wonton skins for gyoza wrappers, cut them into circles using a biscuit cutter.

We mixed and matched wrappers, fillings and cooking methods to make a variety of dumplings, and all were delicious.

There are as many ways to fold a dumpling as there are ways to leave your lover (to steal a line from Paul Simon).

Some folds are traditional to specific fillings or regions, but the general idea is the same — encase the filling.

Once filled and shaped, dumplings and buns can be frozen. Cook them straight from the freezer, adding a few minutes to the cooking time.

The simplest, easiest fold for beginners is the half-moon or crescent. It will work for most of the following recipes and is the best fold for store-bought wrappers. Lay the round on a flat surface and coat the edge with a thin layer of water. Center the filling on top of the dough round and neatly fold the round in half, pushing out the air. Press edges to seal. 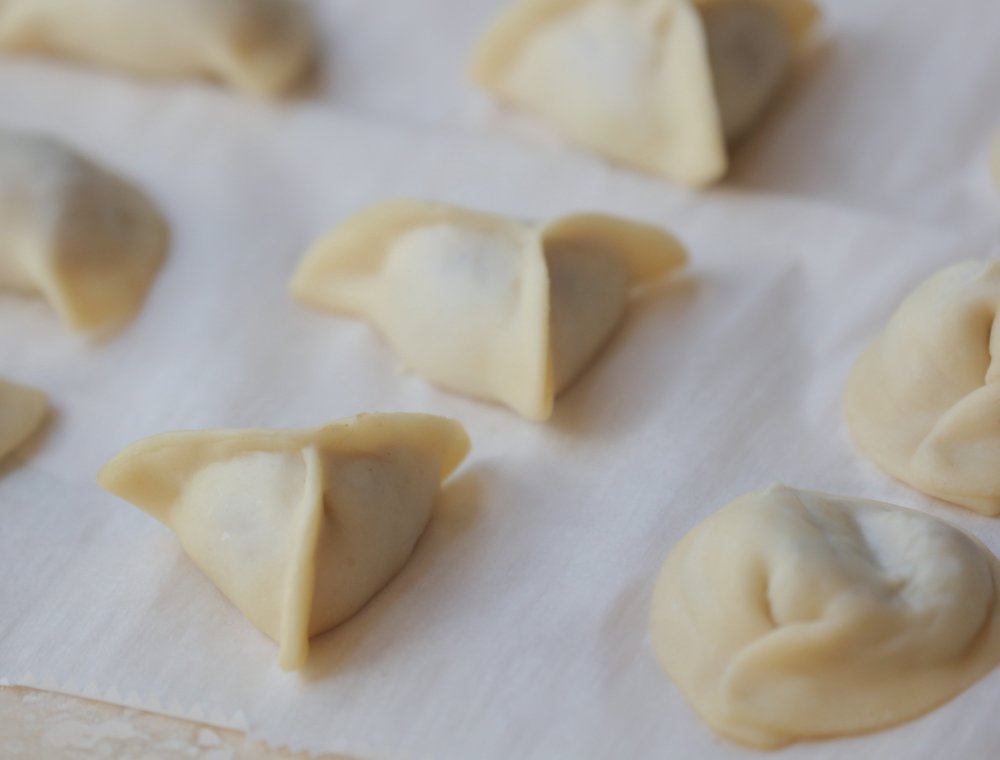 For potstickers, the ideal fold is the standing half-moon. Fold and seal as directed for the half-moon, then holding the dumpling by its seal, stand it up and tap the dumpling gently on a work surface to flatten the bottom. If desired, fold a pleat in the center. 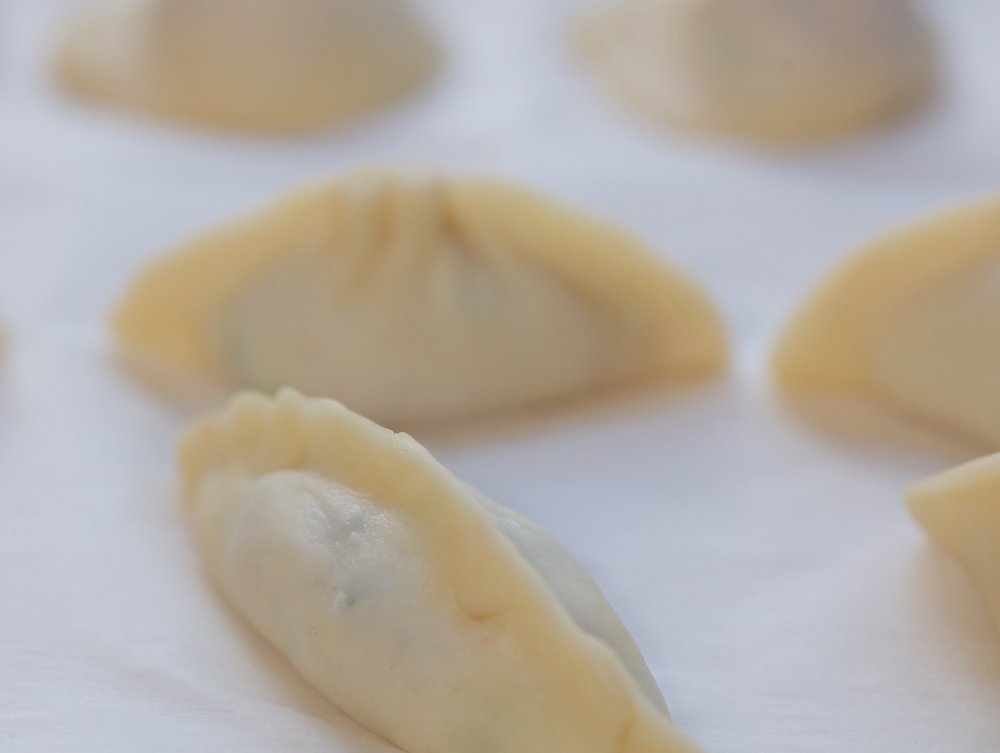 Another simple fold is the triangle. Place a dollop of filling in the center of the round. Coat the edge with a thin layer of water. If using thin wrappers (wonton or gyoza), fold the wrapper like a taco, but don't close it. Press one end closed, stopping about a third of the way to center. Holding the pressed end closed in one hand, use your other hand to press the center edge of the open end toward the center. Pinch edges closed, forming a triangle. If using steamed bun dough, using your thumbs and forefingers, press the top and lower left and right sides of the round together simultaneously, then press the edges together to seal.

For momo and steamed buns including manapua and siopao, the pinched-top fold is ideal. Place the filling in the center of the dough round and lightly coat the edge with water. Pinch two opposite sides of the round together and then gather and pinch the remaining sides, pushing any air out. Pinch the gaps to seal, creating a pleated look, and twist the resulting nub to form the top of the dumpling. Buns can be steamed twist up or down. 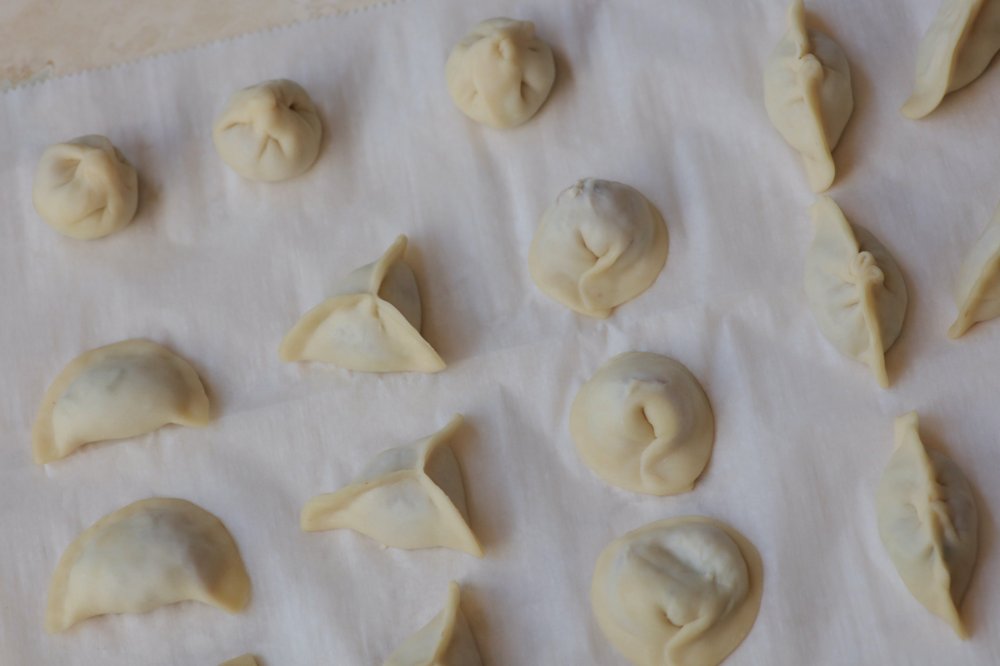 Cooking methods vary by wrapper and cuisine. Dumplings made with gyoza wrappers may be steamed, pan-fried or boiled. Steamed buns are traditionally, well, steamed, but we've seen recipes for baking or pan-cooking, too.

Unless otherwise noted, fillings are uncooked.

For potstickers, heat about 1 tablespoon of oil in a large skillet. Working in batches, add dumplings, seam side up, and cook until bottoms are golden. Add 2 tablespoons of water to the pan (careful! -- it will spatter), cover and cook until the filling is cooked through and most of the water has evaporated.

For steamed thin-skinned dumplings, line a bamboo or metal steamer with parchment paper. Arrange the shaped dumplings in a single layer on the parchment. Bring a skillet or wok with about 1 inch of water to a boil. Place steamer atop the skillet. Steam dumplings for 10 to 15 minutes or until cooked through. 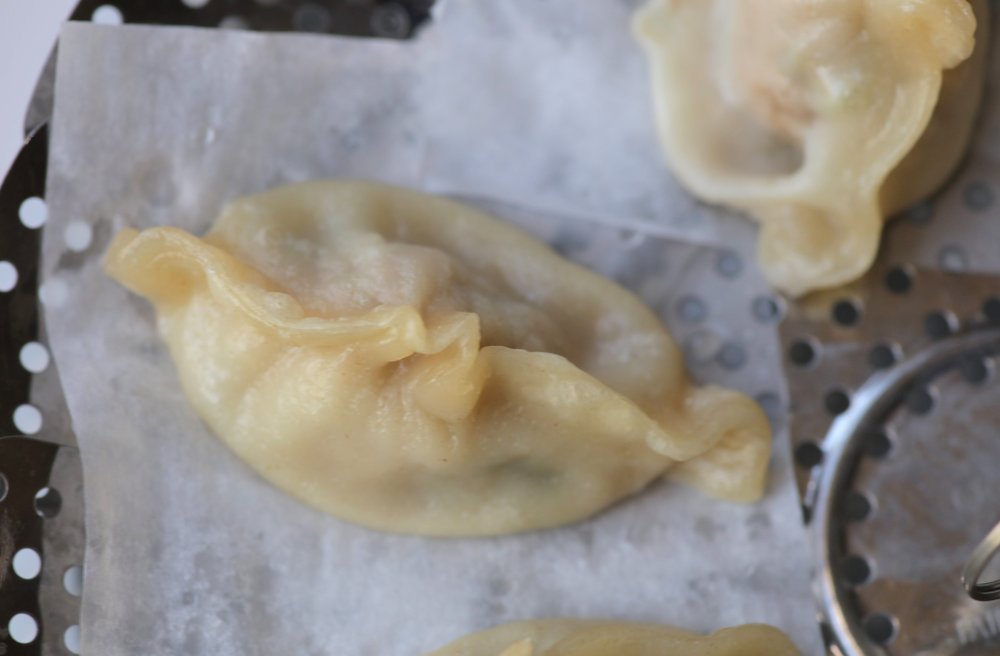 For boiled dumplings, bring a pot of water to boil. Drop the dumplings into the boiling water and cover the pot. As soon as the dumplings start to float (meaning they are cooked), remove with a slotted spoon or spider.

For steamed buns, line a steamer with parchment paper and arrange the buns in a single layer spaced at least 2 to 3 inches apart on the parchment. Fill a wok or wide pot with an inch or so of water and bring the water to a simmer over medium heat. After the water comes to a simmer, set the basket over the water, covered, and steam for 10 to 15 minutes. Turn off heat and let stand for 5 minutes. Buns with uncooked filling will need the full 15 minutes to steam. 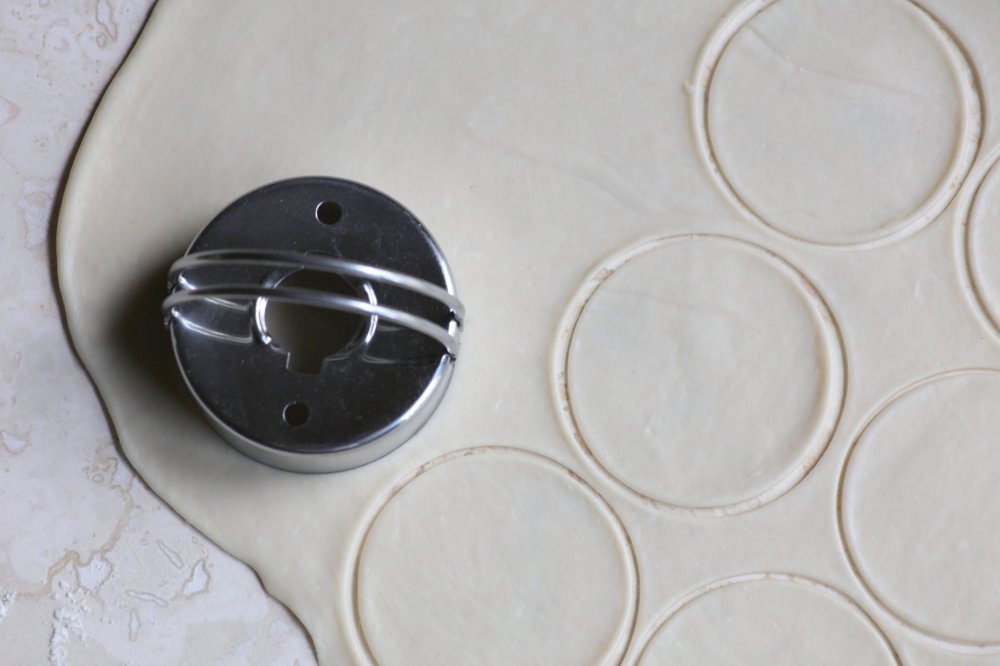 Homemade Gyoza dough is ready to use in about an hour and rolls easily. (Arkansas Democrat-Gazette/John Sykes Jr.)

Combine the flours and salt in a mixing bowl and mix well. Add the water and stir to form a crumbly mixture. Add the sesame oil and mix well. Using your hands, press mixture into a ball. Wrap in plastic cling wrap and let rest for 30 minutes.

Remove cling wrap and knead the dough on a lightly floured surface until smooth. Re-wrap in plastic cling wrap and let rest again for 30 minutes. (This is a good time to prepare your filling.)

Divide the dough in half. Working with one portion at a time, roll dough to an eighth-inch thick or thinner on a lightly floured surface. Cut dough into 2 ¾ or 3-inch rounds using a biscuit cutter, cookie cutter or drinking glass. Place cut rounds between sheets of parchment paper. Repeat with the remaining dough. Press together and re-roll and cut scraps.

Fill with about 1 ½ teaspoons filling, fold and cook as desired.

Note: Can use all all-purpose flour. 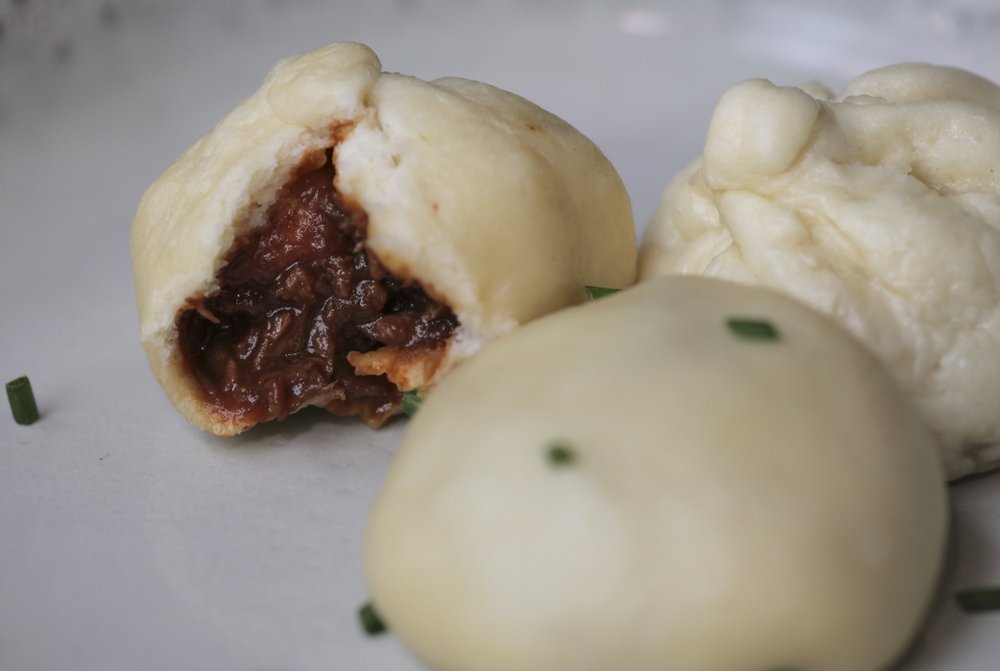 Up to 4 tablespoons sugar

In a small saucepan, heat milk and oil over low heat until lukewarm (110 to 115 degrees). Pour into a bowl and sprinkle with yeast. Let proof for 8 to 10 minutes.

In the bowl of a stand mixer or by hand, combine the flour, salt and sugar. With the mixer on low speed, slowly drizzle the yeast mixture into the flour mixture. Mix until the dough pulls away from the bowl. Then knead by hand, or using the dough hook, until smooth, 5 to 10 minutes.

Transfer the dough to a lightly oiled bowl, cover, and let rise until doubled in size, about 1 hour.

Turn onto a lightly floured surface and knead for just a few strokes. If the dough is too sticky, knead in flour a teaspoon or so at a time.

Divide the dough into two portions and shape each portion into a thick log. Cut each log into 8 to 10 equal pieces. Roll each piece into a 4- to 4 ½-inch circle, making sure the dough is a little thicker in the middle and thinner on the edges.

Place about a scant tablespoon of the desired filling in the center of the circle. Lightly brush the outer edge of the dough with water, and fold using the triangle or pinched top methods.

Keep the finished buns covered while you assemble the remainder. 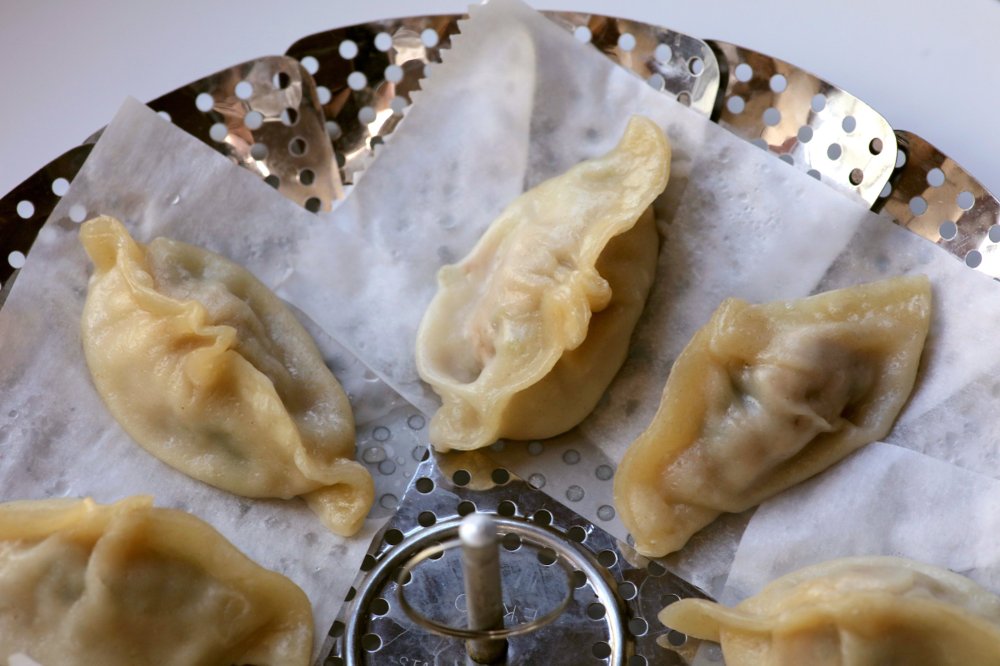 In a medium bowl, combine the beef, onion, cilantro stems, ginger, oil, garlic, salt and 2 tablespoons water. Using your hands, mix thoroughly but gently. Cover and set aside for about 30 minutes or refrigerate overnight. 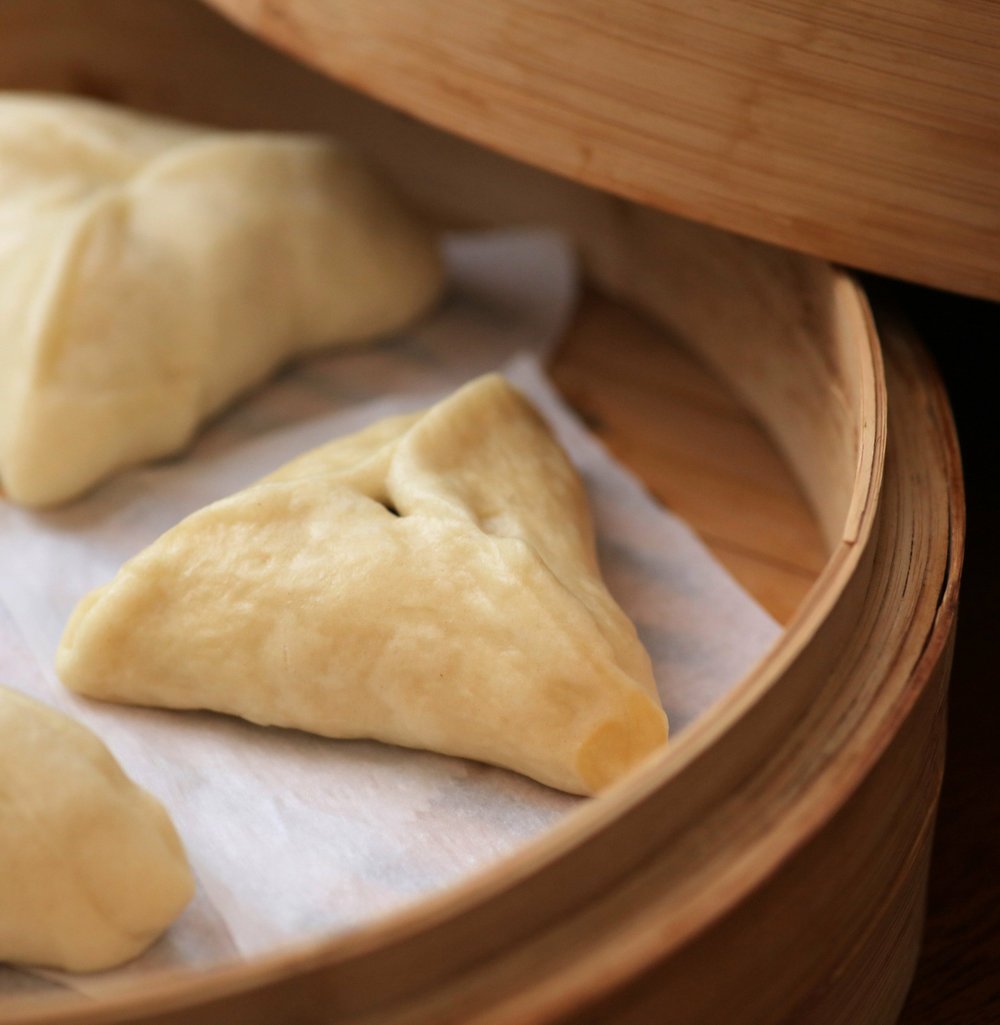 This filling makes a delicious dessert or breakfast bun. The buns can re-heated in a microwave or steamed.

In a small skillet over low heat, toast flour, stirring constantly until lightly browned. The color change will happen quickly, so watch carefully. Transfer flour to a bowl. In the same skillet, toast the sesame seeds, stirring constantly, until golden brown. Add the sesame seeds to the bowl with the flour along with the brown sugar. Mix well. Use 1 to 1 ½ teaspoons filling per bun.

Makes enough for about 16 buns.

Print Headline: Wrap it up