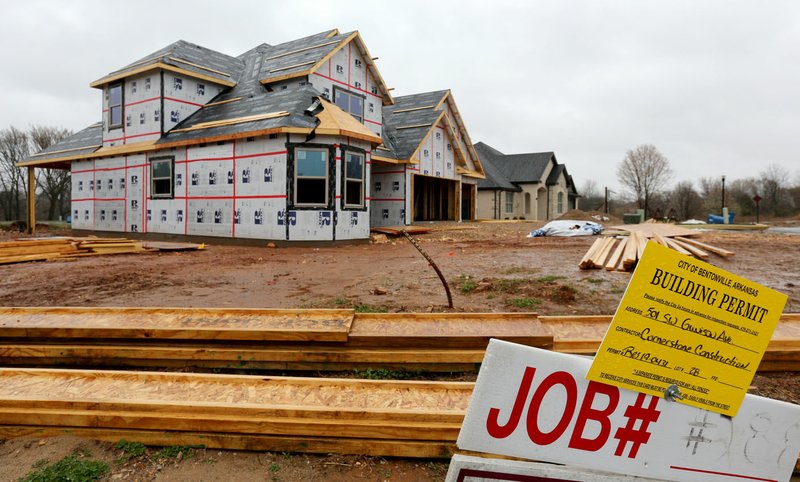 A single family house is under construction Monday at the corner of Gunison Cove and Coler Creek Avenue in Bentonville. Despite rising prices and shrinking inventory, 4,910 new and existing homes were sold in the second half of 2019, for the highest six-month number of recorded sales since the Skyline Report began tracking them in 2004. Go to nwadg.com/photos for a photo gallery. (NWA Democrat-Gazette/David Gottschalk)

Population growth in Benton and Washington counties drove home sales to a record level in 2019, according to a report released Tuesday.

Despite rising prices and shrinking inventory, 4,910 new and existing homes were sold in the second half of 2019, for the highest six-month number of recorded sales since the Skyline Report began tracking them in 2004. Added to the 4,747 homes sold in the year's first half, 9,657 homes were sold in 2019 -- a record annual total.

At the same time, the number of available lots for home construction fell to the lowest level since 2004. This will keep home prices high for the foreseeable future and put home ownership out of reach for many in the area, said Mervin Jebaraj, director of the Center for Business and Economic Research at the University of Arkansas and lead researcher for the report.

The supply of available lots in Northwest Arkansas for building fell 60.9% since 2014, according to the report. The 23.3-month supply, at the current rate of absorption, is the lowest on record. In the second half of 2014, the available supply was 60.9 months.

"The inventory of homes being sold is flattening," Jebaraj said. This is a great time to sell, he said, but people aren't selling their homes because they don't believe they can find something else they can afford.

"It's a difficult market, and this is why we'd like to see prices level off," Jebaraj said.

In 74 of the counties' 426 subdivisions in development, no new construction or progress in existing construction occurred in 2019, according to the report.

In the multifamily market, the vacancy rate for all properties with 10 or more units rose to 4.9% in the second half of 2019 from 3.5% in the first half of that year and the second half of 2018. The increase was attributed to several large projects under development in Fayetteville and Bentonville.

Fayetteville has more than 3,500 multifamily rental units, or 16.2% of current inventory, either announced or under construction. Its vacancy rate rose to 5.6% in the last six months of 2019 from 4.3% the previous year.

Bentonville's vacancy rate jumped to 8.5% in the latter half of 2019 compared to 3.7% a year earlier. More than 2,800 rental units have been announced or are under construction in that city.

In Rogers, however, vacancy rates fell to 2.3% from 3.6% as new units were absorbed. More than 2,900 additional units are in the construction pipeline to meet demand.

Multifamily vacancy rates in Springdale remained at 1.5% from the second half of 2018 to the same period of 2019. More than 1,900 units are either planned or under construction in Springdale. Tontitown is included in that number.

Siloam Springs had the lowest vacancy rate in the two counties, at 1.2%, from July to December of 2019. That's down from 2% in that period the year before.

Throughout 2019, 144 building permits were issued for multifamily housing projects in the area, for a total value of $359 million.

Although the Skyline Report debuted in 2004, highlights from it weren't released to the public until 2005, Arvest officials said. Customers wanting more granular information from the report can meet with Arvest bankers, they said.