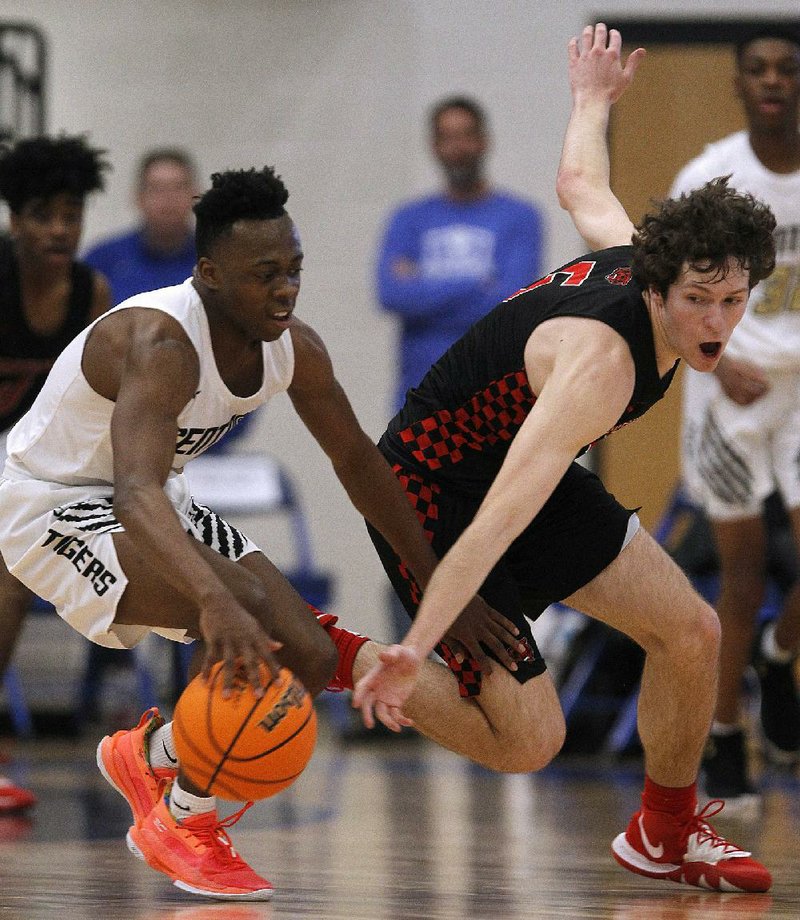 Little Rock Central’s Jeremiah Jones (left) keeps the ball away from Fort Smith Northside’s Garrett Keller during the fourth quarter of the Tigers’ 40-37 victory over the Grizzlies on Saturday in the semifinals of the Class 6A boys state basketball tournament in Bryant. More photos are available at arkansasonline.com/38boys6a/. (Arkansas Democrat-Gazette/Thomas Metthe)

BRYANT -- There isn't a player on Little Rock Central's roster who was around to witness the last time the Tigers reached a state final, but that won't be the case much longer.

The Tigers are heading back to the championship game.

Senior guard Jeremiah Jones finished with 13 points, 8 rebounds and 3 steals as the Tigers used a deliberate approach to shock Fort Smith Northside 40-37 in the semifinals of the Class 6A boys state tournament Saturday at Hornet Arena.

Sophomore guard Cody Robinson added nine points for Central (18-12), which will play in their first state title game since 2002 when it lost to Little Rock Parkview 63-57 in what was then the AAAAA final. The Tigers haven't officially won a basketball crown since 1999, but they'll get a chance to end that 21-year drought after dethroning last year's champion.

The Tigers will face 6A-Central rival Conway on Saturday at Bank OZK Arena.

"The effort from these guys has just been unbelievable," Central Coach Brian Ross said. "They've done everything that we've asked them to all year, and they left it all out there in this one. It shows that hard work pays off, being a team player pays off and being a part of something bigger than yourself is worthy. It's truly a special moment."

On the game's first possession, Central worked the ball around the perimeter for more than two minutes while Northside sat back in a zone defense. The Tigers put up their first shot with 5:30 to go in the quarter. The result was a miss, but the plan of attack was set in motion. 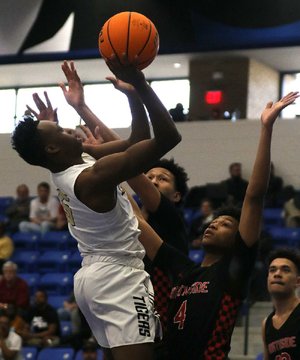 "That was hard to do for us because we don't ever slow it down like that," said Ross, whose team struggled against the Grizzlies' zone during their 77-58 loss on Feb. 12. "But we went back and looked at the teams that had beaten them, and it seemed like it was always a slower-paced game. So we just wanted to set the tone in the first quarter.

"Not that we were going to walk around the whole game, but we wanted to put it in Northside's minds that it was going to be a slower game."

The teams were tied 4-4 after the first quarter before the Tigers erased a 14-11 deficit with an 11-3 rush over the final three minutes of the second quarter to grab a 22-17 lead by halftime.

Northside (20-6) did make adjustments, but Coach Eric Burnett wasn't happy with the way the Grizzlies reacted to the Tigers' scheme.

"We fell into their trap, and we panicked because they came out stalling," he said. "We're not used to anyone stalling against us, but I get it, and I don't blame them. Going against a 6-10 kid like Jaylin Williams ... the less amount of touches he gets, the better they are.

"In the second half, we came out relaxed and played a little bit, but [Central] made plays when they had to, bottom line."

Williams, a University of Arkansas signee, finished with 17 points and 13 rebounds for the Grizzlies, who scored the first eight points of the third quarter to take a 25-22 lead. Central responded with eight points, highlighted by a dunk from junior forward Kiyler Hudson with 1:45 remaining in the period.

Central held a 37-30 advantage with 5:41 to go in the fourth quarter, but a three-point play from Williams started a string of five points for Northside. The Grizzlies had opportunities to pull closer as the period wore on but couldn't take advantage. Northside had one last shot to tie the game after a free throw from senior guard C.J. Price gave the Tigers a three-point lead with 2.5 seconds left, but Williams' three-pointer at the buzzer hit the back of the rim as time expired.

"We've always had the talent, and I knew early on that we had kids that would always play hard and were coachable," said Ross, whose team upset 6A-West top seed Springdale Har-Ber on Thursday. "The thing was we just didn't have a lot of game experience coming in and had injuries later that delayed our progress a little bit. But they just kept getting better and better every day, and now they've got a chance to win a championship."

A busy night from Jayden Williams turned out to be a good thing for Conway.

The junior forward had 16 points, 13 rebounds, 5 blocks and 4 steals as the Wampus Cats beat Fayetteville in the semifinals at Hornet Arena.

"We challenged him in this one because when we played Fayetteville in December, their bigs outran our bigs all night," Conway Coach Brian "Salty" Longing said. "He responded big time. He's been playing well since about the end of January, but for him to do what he did in this one, when we needed it, was huge."

Bohannon and senior forward Caleb London added free throws to push Conway's lead to five, and Williams stole a pass from Fayetteville moments later to ice it for the Wampus Cats.