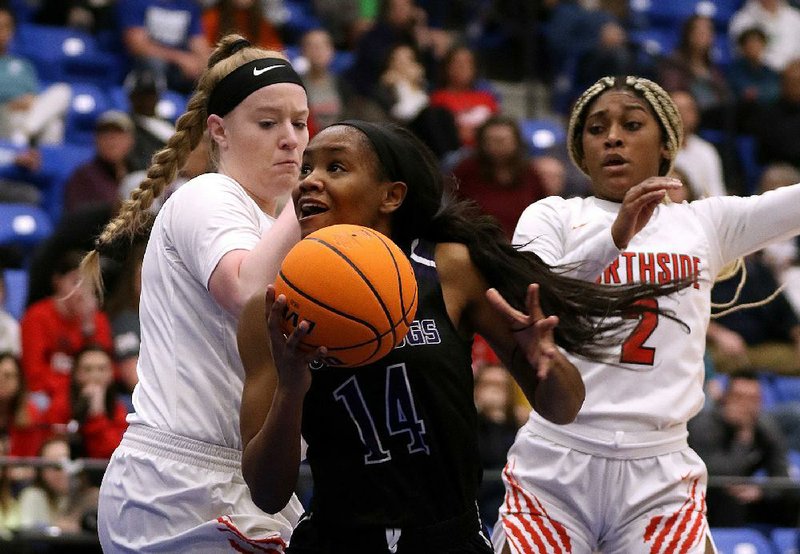 BRYANT -- Sasha Goforth didn't have the big scoring game that Fayetteville is accustomed to Saturday night, but she had the remedy for the Lady Bulldogs' late ailment.

The senior guard scored the go-ahead basket on a driving layup with 11 seconds left to help Fayetteville outlast top-ranked Fort Smith Northside 55-53 in the semifinals of the Class 6A girls state tournament at Hornet Arena.

Senior guard Coriah Beck scored a game-high 24 points for Fayetteville (23-5), which had its hopes crushed in triple overtime by Northside in last year's semifinal.

Goforth finished with 10 points and Claudia Bridges had nine, all on three-pointers, for the Lady Bulldogs, who will make their return to the state finals for the first time since winning the title in 2017. Fayetteville will face Bentonville at 6 p.m. on Saturday at Bank OZK Arena in Hot Springs.

The Lady Bulldogs didn't trail until Fort Smith Northside senior forward Tracey Bershers scored on a put-back with 33.9 seconds left in the game. With the game up for grabs, Fayetteville put the ball in the hands of Goforth.

"She's such a great teammate, and we're such a team that it was all about the matchups," Fayetteville Coach Vic Rimmer said. "Coriah [Beck] had the matchup, Caroline [Lyles] had the matchup, Claudia [Bridges] with the three-pointers ... but at the end when Sasha wanted to get it done, she went and got it done."

Goforth, an Oregon State commitment and 2020 McDonald's All-American, didn't hit her first basket until the 6:42 mark of the third quarter, but she also spent a large majority of the night trying to defend Northside guard Jersey Wolfenbarger. The Lady Bears' 6-4 junior tallied 21 points and nearly put the Lady Bears back ahead after Goforth's score, but her jumper came up short against a tight defense.

Beck would later add a free free throw, and Bershers' half-court shot at the buzzer missed.

Fayetteville was the aggressor throughout the first half, with Beck doing the bulk of her damage inside while being guarded by a smaller defender. The 5-8 University of Memphis commitment gave the Lady Bulldogs an 18-11 lead with a short basket and later quieted a five-point Northside rally with a three-pointer from the top of the key. The bucket put Fayetteville ahead 23-19, but Northside continued to ride Wolfenbarger to knot things up at 25-25 by halftime.

"We knew it'd be a tight one, just like it was last year when we played them," Rimmer said. "Coriah carried us there for a while. She struggled the last two or three games and hadn't played really well. But [Saturday] she got going, our team saw that, and we went to her."

The Lady Bulldogs regained the momentum in the second half and led 45-36 with 6:26 left in the game until the Lady Bears wrestled it away with a big flurry.

A free throw from sophomore guard Haitiana Releford ignited a 15-6 rally that got Northside within 52-51. Bershers, who had 13 points, later gave the Lady Bears their first lead after scoring off a Wolfenbarger miss before Goforth answered.

"Give Fayetteville credit because they played well," Northside Coach Rickey Smith said. "We played from behind the whole ballgame. The ball just never really bounced our way. Several drives for layups rimmed out, the ball would bounce their way.

"One year ago today, the ball bounced our way. This year, it didn't."

Another dominant outing from Maryam Dauda, another trip to Hot Springs for Bentonville.

The Lady Tigers' junior center scored 32 points and pulled down 10 rebounds as Bentonville (27-1) jumped out of the gates quickly to beat Conway in the semifinals.

Sophomore guard Jada Brown scored 15 points, senior guard Natalie Smith had 14 and junior guard Riley Hayes finished with 10 for the Lady Tigers, who shot their way to a 22-7 lead in the first quarter and never slowed down en route to earning their second consecutive berth in the title game.

"Our guards did a great job of setting the tone and making shots," said an emotional Bentonville Coach Tom Halbmaier, whose Lady Tigers also beat Conway in the semifinals last year. "Maryam had a rough start at first by missing some easy buckets. When she started warming up, we got better. But this one is special for these kids.

"I get more excited watching them work hard. To see all the work they've put in pay off like it has, that's big for me."

Freshman guard Chloe Clardy had 22 points and sophomore forward Kalayna King added 10 points for Conway (22-8), which trailed 48-31 at the half but was down just 52-40 and in possession of the ball with 4:48 left in the third quarter. The Lady Wampus Cats turned it over on three of their next four trips. Bentonville scored on two of those miscues and closed the period on a 13-3 surge to restore control.