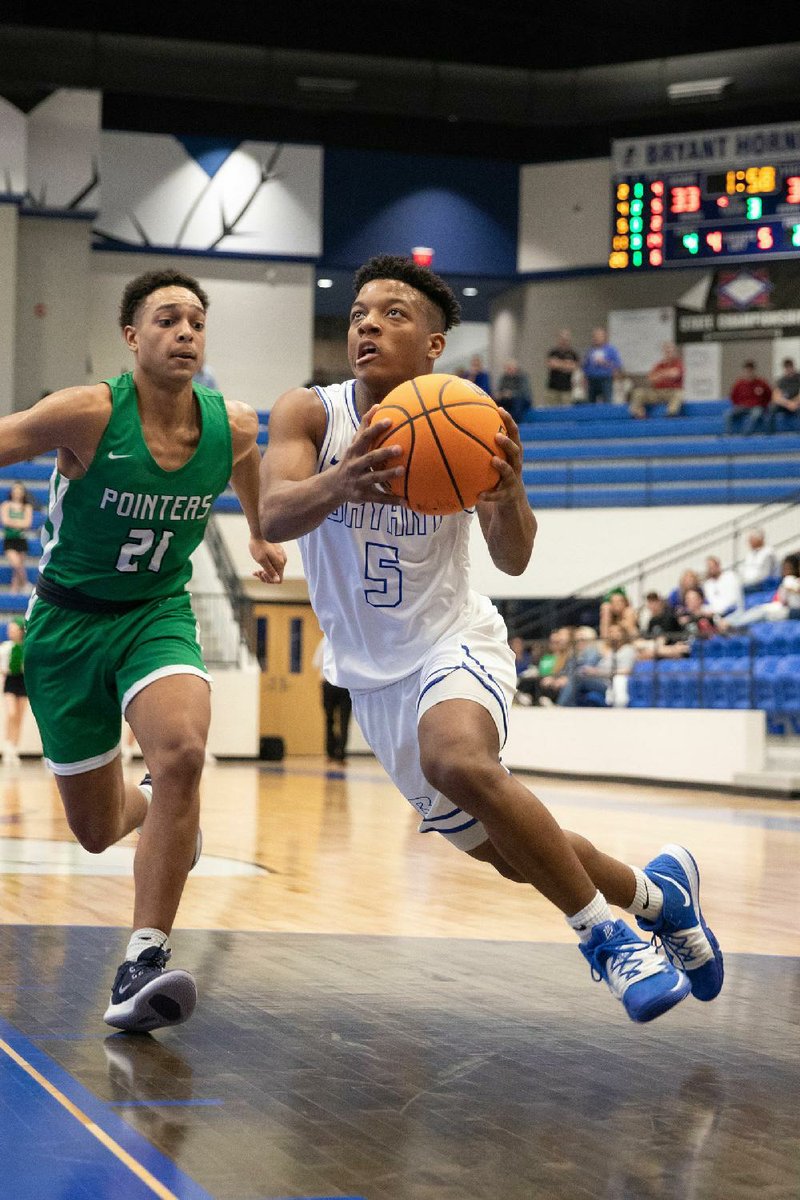 Point guard Cory Nichols (right) of Bryant drives into the lane past Van Buren’s Tiyeze Castleberry during the Hornets’ victory over the Pointers on Thursday at the Class 6A boys state tournament in Bryant. (Arkansas Democrat-Gazette/Justin Cunningham)

BRYANT -- The Bryant Hornets needed reinforcements against Van Buren on Thursday, and they got them from an unheralded trio.

Guards Khasen Robinson, Aiden Adams and A.J. Jenkins combined to score 39 points as the host team battled back from a fourth-quarter deficit to ease past the Pointers 58-47 in the first round of the Class 6A boys state tournament at Hornet Arena.

Robinson, a sophomore guard, scored all 14 of his points in the first half; Jenkins, a senior, tacked on 13 points; and Adams, a junior, had 12 points for Bryant (17-11), which had to endure unfavorable circumstances to shake off Van Buren and advance to face Fayetteville today at 8:30 p.m.

The Hornets, the No. 3 seed from the 6A-Central, were missing standout junior guard Camren Hunter, who sat out with an ankle injury. Also, leading scorer, senior guard Treylon Payne, put Bryant in a tough spot when he picked up two fouls in the first quarter, the latter of which came with 14.6 seconds remaining in the period.

Payne, who finished the game with 11 points, missed most of the second quarter but re-entered late before being whistled for his third foul at the 13-second mark. He did nail a jumper with the clock winding down to give Bryant a 27-25 lead at halftime.

"A common phrase in athletics is next man up, and [Thursday] it was next men up," Bryant Coach Mike Abrahamson said. "I tried to tell our team before how good Van Buren really is. We made some adjustments there in the second half, started pressing a little bit. 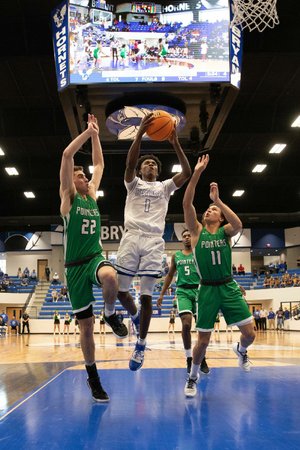 Bryant’s Treylon Payne splits two Van Buren defenders Thursday as he drives to the basket during the Hornets’ 58-47 victory in the Class 6A boys state tournament in Bryant. (Arkansas Democrat-Gazette/Justin Cunningham)

"Then, we made some adjustments on offense that allowed us to open the lane up for [Jenkins]. But I couldn't be any prouder of the guys."

Payne's basket was his only one of the first half, but fortunately for the Hornets, Robinson was around to ease the scoring burden. He drilled four three-pointers in the first half to keep Bryant in the game. Later, when Robinson and Payne picked up their fourth fouls 20 seconds apart in the third quarter, Jenkins and Adams buried timely baskets in the fourth, which was key because the Pointers wouldn't go quietly.

The Pointers, who got 15 points from junior guard Gary Phillips, turned the ball over six times and didn't hit a shot until 2:18 remained. By that time, the Hornets had scored 15 consecutive points to seize command.

"At the end of the day, we're playing the host team on their home floor during the state tournament, and that's tough to overcome," Van Buren Coach Brad Autry said. "Our guys fought and fought and fought. We made some mistakes late defensively and offensively with execution, but give credit to Bryant.

"They took us out of a couple of things that we were comfortable running, and Coach Abrahamson did an unbelievable job of adjusting while we had a hard time re-adjusting to those adjustments."

Senior guard Karter Allen hit a free throw with 5.3 seconds left to send the Tigers to an overtime victory.

Cody Robinson scored 18 points and Jeremiah Jones had 15 for Central (17-12), which trailed 43-36 in the third quarter but fought its way back. A Jones' three-pointer with 37 seconds remaining in regulation tied it at 58-58. Allen, who finished with 10 points, nearly won it at the buzzer, but his three-pointer rattled out.

Lawson Jenkins scored 21 points for Har-Ber (21-5), which had chances to win in the extra session but turned the ball over on its final two possessions, including a costly one with two seconds left. JaJuan Boyd and Nick Buchanan each had 12.

Junior guard Jacob Joe furnished a game-high 21 points as the defending Class 6A champions ran past the Panthers.

Senior center Jaylin Williams added 19 points and senior guard Maury Owens had 12 for Northside (20-9), which opened defense of its title by dominating its 6A-Central rivals.