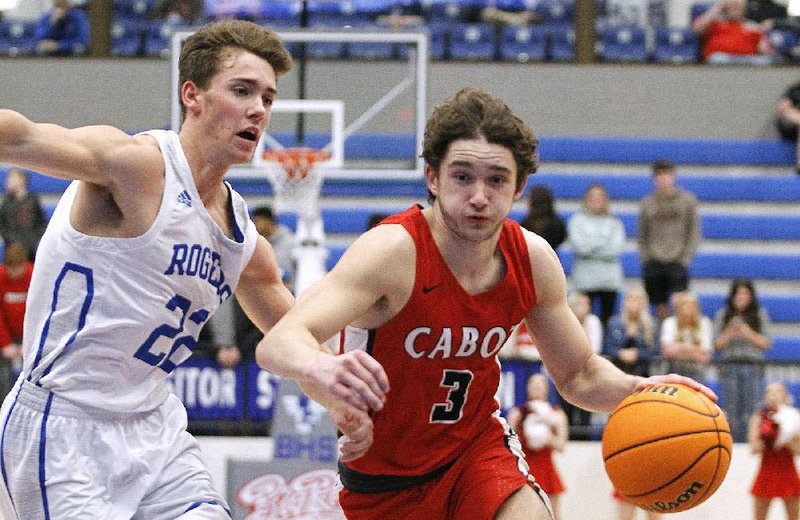 Cabot’s Jackson Muse (right) dribbles toward the basket past Derek Hobbs of Rogers during Cabot’s victory Wednesday in the first round of the Class 6A boys state tournament in Bryant. More photos available at arkansasonline.com/35boys6a. (Arkansas Democrat-Gazette/Thomas Metthe)

BRYANT -- Cabot faced foul trouble for the majority of Wednesday's game against Rogers, but it was a call that went the Panthers' way that enabled them to keep their season alive.

Mounties senior guard Elliot Paschal was whistled for an offensive foul with 2.2 seconds left in regulation, allowing Cabot, the 6A-Central's No. 6 seed, to escape with a 42-41 victory during the first round of the Class 6A boys state tournament at Bryant's Hornet Arena.

Senior forward Weston Vaught scored a team-high 13 points for Cabot (19-9), which had three players saddled with four fouls each for a large chunk of the second half. But the Panthers were able to withstand their foul woes, as well as charge after charge from Rogers, to avoid elimination.

"We survived it, and that was good to see," Cabot interim Coach Logan Bailey said. "Nobody really wants to play Rogers because they guard you, they're long and they can shoot it. But we did a good job of protecting the three-point line and we survived."

Jackson Muse, a senior guard, scored all 10 of his points in the first half for the Panthers, who will play Fort Smith Northside today at 8:30 p.m.

Senior forward Drew Miller had 18 points for Rogers (21-5), the No. 3 seed from the 6A-West. The Mounties also got 10 points from sophomore guard Will Liddell, but Rogers came up short when it needed to make a play late.

Cabot stayed out front for most of the first half. Rogers did hold a 20-18 lead after a bucket by Miller finished off a 7-2 surge with 3:53 to go in the second quarter. The Panthers would score seven of the final eight points of the quarter to hold a 25-21 lead at halftime.

The Panthers extended their margin to 32-23 in the third quarter behind a 7-0 run, culminated by a three-pointer from Vaught, and held a 38-31 advantage with 5:55 left in the game. But Rogers chipped away and eventually grabbed a 41-40 lead after two free throws from Miller with 51 seconds remaining. Senior guard Seth Vance hit an eight-footer on the next possession with 22 seconds showing to give the Panthers a one-point lead before Paschal was called for charging into a Cabot defender moments later.

Rogers did get off a shot from 72 feet as the buzzer sounded, but it landed well short of the goal. 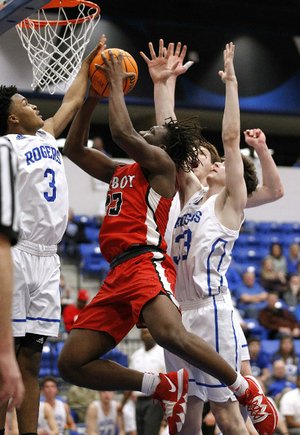 Cabot’s Jacob Hudson (middle) puts up a shot between Rogers defenders Ty Cunningham (3) and Joel Garner during the second quarter of the Panthers’ 42-41 victory Wednesday in the first round of the Class 6A boys state basketball tournament in Bryant. More photos are available at arkansasonline.com/35boys6a/. (Arkansas Democrat-Gazette/Thomas Metthe)

"It came down to a play here, a play there," Rogers Coach Lamont Frazier said. "[Cabot] was able to make plays, and we weren't able to down the stretch. We had plenty of opportunities, but we just couldn't capitalize on them when we had the chance."

The Tigers got 18 points apiece from junior guard Corey Camper and sophomore guard Cody Robinson to eliminate the Wolverines.

Senior guard Jeremiah Jones added 14 points, 8 rebounds and 5 steals for Central (16-12), which didn't need a comeback to knock off Bentonville West this time around.

The Tigers, who rallied from a 14-point deficit to beat the Wolverines in December, never trailed and used a 14-3 run in the second quarter to turn a 23-20 advantage into a 37-23 lead. Central led by as much as 50-29 in the third quarter.

Senior guard Dillon Bailey battled foul trouble but finished with 14 points for West (10-15), which did climb within 54-46 in the fourth quarter. Sophomore guard Riley Buccino had 12 points and junior guard Dalton McDonald tossed in 11.

A free throw from senior forward Caleb London with 2.1 seconds left aided the Wampus Cats in their come from behind victory.

Senior guard Trey Tull scored 17 points, London had 12 and Jayden Williams 11 for Conway (19-9), which trailed 29-20 at halftime and 41-34 with less than six minutes remaining. But the Wampus Cats fought back and later took the lead on a Williams' layup with 1:56 left. Freshman Jaylen Lee tied it at 48-48 for Bentonville with 14 seconds left before London's free throw secured it for Conway.