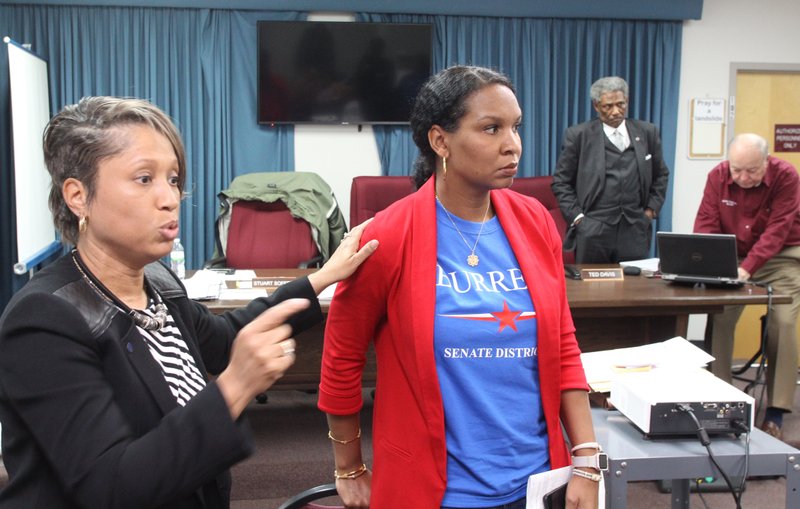 PINE BLUFF -- Voting machine problems in Jefferson County delayed the vote count in both city and county races Tuesday night after poll workers in several locations were unable to close out the machines because of electronic failures.

Technicians from the election commission had to manually close the machine at each affected location.

The iVotronic touch-screen voting machines have been in service for about 15 years. Michael Adam, chairman of the Jefferson County Election Commission, announced shortly before 9 p.m. that final results would be delayed. The results were announced after 10:30 p.m.

The primary got off to a rocky start during early voting when a ballot error in the Democratic Primary affecting four precincts that had the wrong state Senate race on the ballot was discovered over a week into early voting and after 152 voters had cast ballots in the wrong race.

"We have sent our lead technician out to the polling sites to address the problem," Adam said at the Election Commission office Tuesday night. "He has been on the phone with [Election Systems & Software] and they've tried several things, but so far nothing is working. The problem is, these machines are old, the contact wires are loose, the batteries are bad, and we're working to get the issues fixed."

The Arkansas Board of Election Commissioners learned of the county's tabulation issue from the election monitor it had placed there. The issue didn't appear to be jeopardizing the actual votes, just delaying the results, said Daniel Shults, director of the board.

"There is a complaint process which would allow us to do a full investigation in the aftermath," Shults said. "I'm fairly confident that won't be exercised."

The monitor will send the board its official report in the coming weeks, Shults said. But based on what he's heard from the monitor so far, he's not too concerned.

"There are several redundancies in the voting equipment," he said. Workers can extract from the machines a record of votes using multiple methods, he said. Receipts are used in recounts.

"So worst-case scenario, there's a paper record you can go back and reference," Shults said.

Stuart "Stu" Soffer, a Jefferson County election commissioner, called the early hours of election day in his county "a nightmare," reminiscent of the theme to the early 1960s sitcom Car 54, Where Are You? that centered on a never-ending series of emergency calls in New York City.

He blamed the problems on inadequate, aging equipment that has long needed to be replaced.

In addition to ballot problems with the Senate 25 and 27 races uncovered earlier, election officials struggled Monday night to load corrected election information to the election reporting manager laptop. That problem was overcome.

But hours later, on Tuesday morning, there were some 20 instances of equipment failure at the polling places. Those were largely because of loose connections between a tape printer and the iVotronic voting machines, causing the machines to fail to turn on. Four of the machines had to be replaced, Soffer said.

By late morning, all the Jefferson County machines were operating, Soffer said, adding that the high school students from Pine Bluff, White Hall and Dollarway who were serving as trained "election pages" had been particularly helpful at various polling sites.

Shults said his office had received a few calls -- as always happens -- from people with and concerns about electioneering.

In Pulaski County, Election Director Bryan Poe said issues with the opening of election day were "nothing out of the ordinary," and that all polling places opened on time.

Frank Barton, an election commissioner in Crittenden County, said that earlier in the day, there was a ballot tabulator at one polling site that counted some ballots and kicked others out. The excluded ballots were secured until a new tabulator was brought in and the ballots counted.

"Everyone who wanted to vote, voted, and all the votes were counted," Barton said, adding that election officials will follow up to ensure that the problem isn't repeated in future elections.

Latara Davis, an elections assistant in Phillips County, said there were a few issues with machines early in the day, but everyone was able to vote.

Election officials in Faulkner, Garland and Sebastian counties said Tuesday that voting had gone smoothly and tabulation was going well, too.

Garland County had counted nearly half of its 25 locations within 45 minutes of the polls closing, Commission Chairman Gene Haley said. The county was the first in the state to get new machines five years ago, he said.