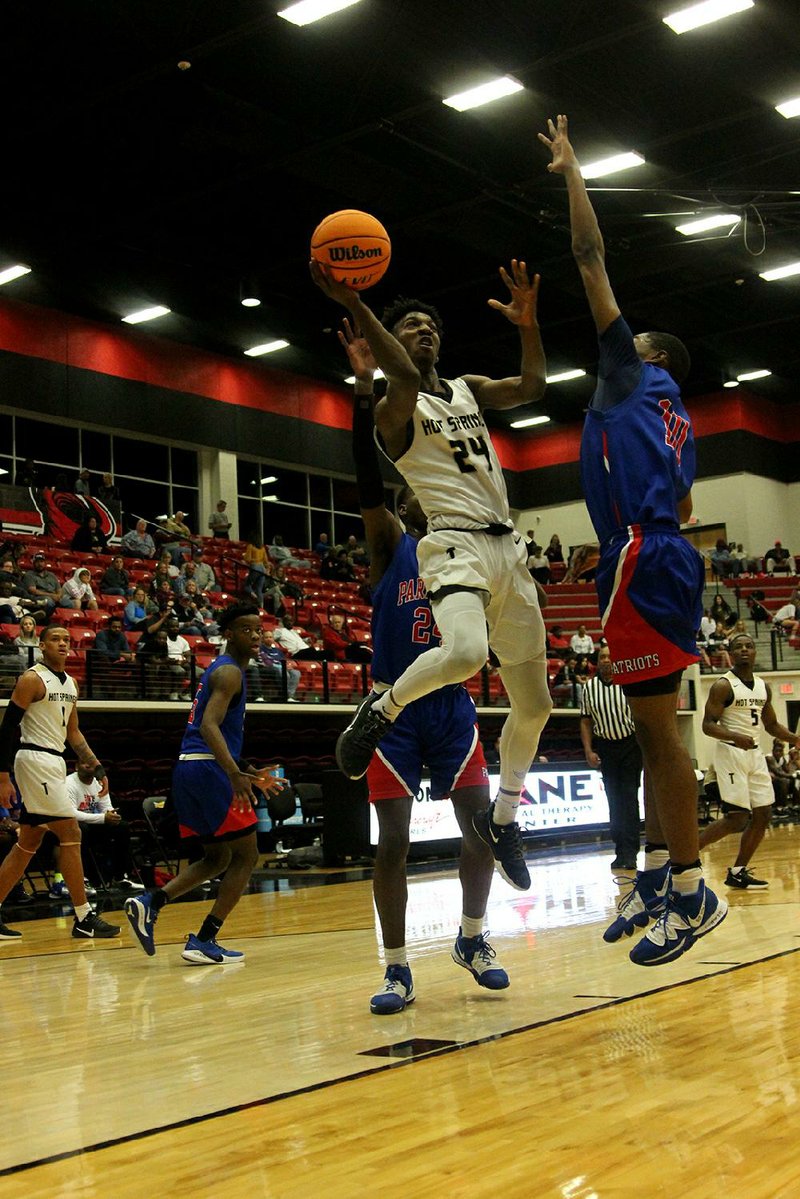 Caleb Campbell of Hot Springs shoots around a Little Rock Parkview defender in the Trojans’ 75-65 victory in the first round of the Class 5A boys state tournament in Russellville. Campbell scored 21 points in the victory. (The Sentinel-Record/James Leigh)

The 5A-South Conference champion Trojans extended that streak to 23, despite a late push from Little Rock Parkview.

Behind 21-point efforts from Jadyn Walker and Caleb Campbell, Hot Springs defeated Little Rock Parkview 75-65 in the first round of the state tournament at Cyclone Arena.

"It's one thing to go undefeated in conference, then if you come in here and lose, it means absolutely nothing," Hot Springs Coach Ant Lasker said. "That's something we talked about a lot."

The Trojans answered with Thomas' layup, which started an 11-0 run that put away the Patriots.

"It was a huge run," Lasker said. "Guys made plays down the stretch. It was an overall, good team effort."

Parkview Coach Scotty Thurman said his team had a chance to pull off the upset, but Hot Springs' late run was too much.

"Inexperience really showed down the stretch," Thurman said. "It's a little different style of play once you get to this part of the season. I thought we kind of panicked. Our guys forgot there was still time. Guys were trying to take it on their own instead of staying together within the team."

Jesse Washington finished with 15 points and eight rebounds for the Hurricane.

Jonesboro will face Maumelle or Lake Hamilton in the quarterfinals at 8:30 p.m. Thursday.

Russellville led 32-25 at halftime, but Jonesboro outscored the Cyclones 42-26 in the second half.

McBride hit a buzzer-beating three-pointer at the end of the quarter to pull the Hurricane within 46-45.

The Blue Devils will play Sheridan or Sylvan Hills at 2:30 p.m. Friday in the quarterfinals.