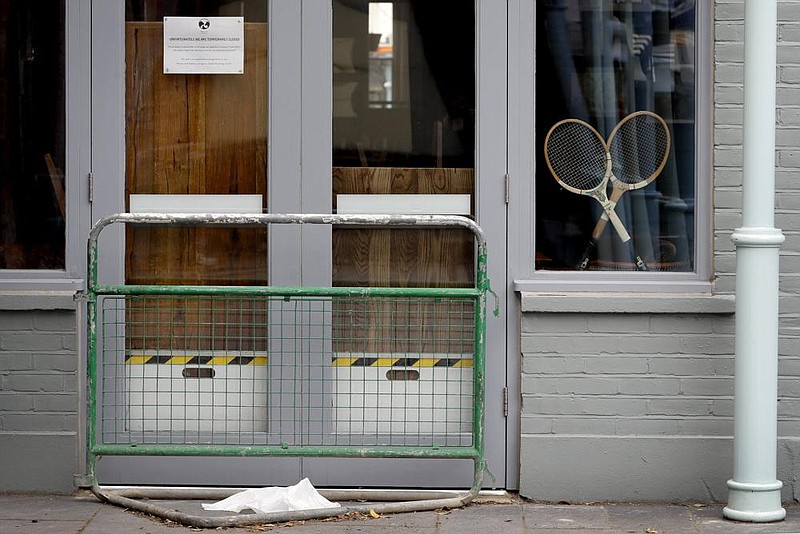 Two tennis rackets are propped in the window of a closed pub Monday in London. Due to have started Monday, Wimbledon was canceled because of the coronavirus pandemic, marking the first time since World War II that the tournament won’t take place. (AP/Kirsty Wigglesworth)

WIMBLEDON, England -- When the clock struck 11 a.m. at the All England Club, there was silence.

Not because a player dressed all in white was about to whack a serve on one of Wimbledon's many perfectly kept grass courts, but because there is no tennis this year at the oldest Grand Slam event in the world.

Monday should have been the the first day of the two-week Wimbledon tournament, and matches usually start just before noon on the outside courts. But because of the coronavirus pandemic, the tournament was canceled for the first time since World War II.

"Sad," said Mary Robbins, a local resident who grew up in Wimbledon and relishes getting a glimpse of Roger Federer or Serena Williams walking through the neighborhood. "It's been part of our lives forever."

Every year, just in time for strawberry season in Britain, the world of tennis turns its focus to the All England Club. The traditional tennis whites worn by every player, the gleaming green grass at the start giving way to brown blotches along the baseline at the end, the majesty of Centre Court on the final weekend.

"It's the highlight of the year for us," said Robert McNicol, the librarian at the All England Club who has been working from home since March. "As somebody who loves tennis, it's what I live for every year."

But 2020 is not like any other year. The coronavirus has claimed more than 500,000 lives around the globe and caused havoc on much of the sports world. And while many sports have gotten back into action or are about to, Wimbledon decided in April to skip this year, in part because it had the foresight to buy insurance against a pandemic.

That insurance will certainly help the All England Club deal with the loss of income this year, but the local businesses in Wimbledon Village just up the hill from the grounds are going to take a big hit.

Normally, the shops, restaurants and bars fill their windows with tennis-related themes, hoping to draw in tennis-obsessed visitors. It's like a little slice of tennis heaven for two weeks.

"The tennis quadruples my turnover, which allows me to pay my rent," said Kelly Duffy, a restaurant owner whose patrons often include professional players and their families.

Duffy has been fortunate, though. Because she has a license to sell alcohol for takeaway as well as food, she's been able to open her business through most of the lockdown, bringing in more money than usual in recent months.

Others haven't been so lucky, first with the shutdown and now with the lack of tourists coming for the tennis.

"Getting new customers is important, so during the tennis it's essential," said Maria Di Nuzzo, the deputy manager of a clothing store in the village. "It's definitely not like last year."

One Italian restaurant summed up the mood with some fitting artwork on its front windows. One side shows the women's and men's trophies covered in a purple cloak with the year 2020 written above it. The other side shows the two trophies in all their glory under the year 2021.

The lack of footfall up in the village, however, doesn't even compare to deserted feeling down the hill.

The club is open, and members can even play tennis. A group of white-clad players could be seen Monday through one of the many closed gates, looking as prim and proper as one would expect for such a hallowed place.

But there is no line of fans camping out waiting for tickets, known in these parts as "The Queue." There is no hustle and bustle to get a seat on the outside courts when the gates burst open. There is no traffic jam with cars lined up to get onto the nearby golf course, which serves as a Wimbledon parking lot every year.

Instead, there are actual golfers on the golf course, adding to the overall eeriness of a world without Wimbledon.

"Strangely in the buildup, I've had the usual sense of anticipation, even though I knew it wasn't going to happen," McNicol said.

"It's quite a melancholy feeling." 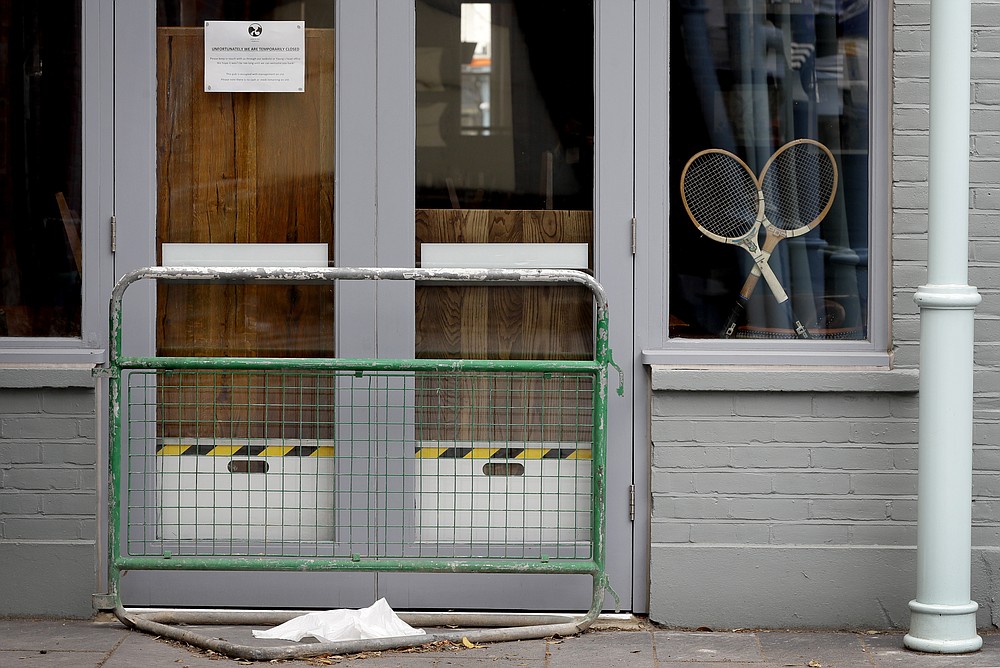 Two tennis racquets propped in the window of a closed pub in Wimbledon in London, Monday, June 29, 2020. The 2020 Wimbledon Tennis Championships, due to start Monday were cancelled due to the Coronavirus pandemic. (AP Photo/Kirsty Wigglesworth) 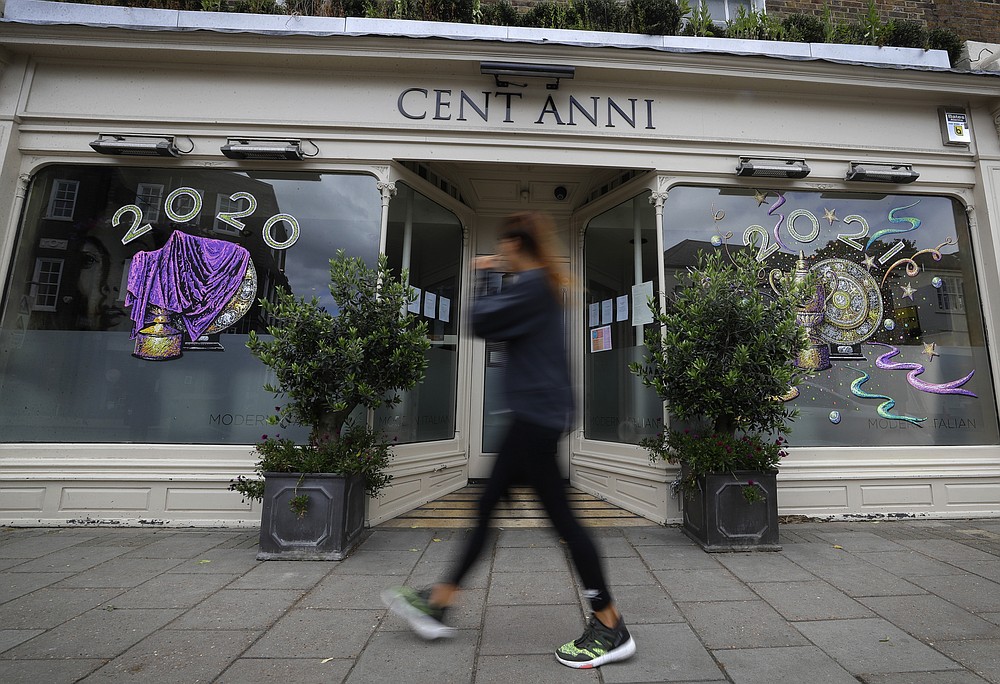 A pedestrian passes signs on the window of a closed Italian restaurant showing the Wimbledon winners trophies in Wimbledon in London, Monday, June 29, 2020. The 2020 Wimbledon Tennis Championships, due to start Monday were cancelled due to the Coronavirus pandemic. (AP Photo/Kirsty Wigglesworth) 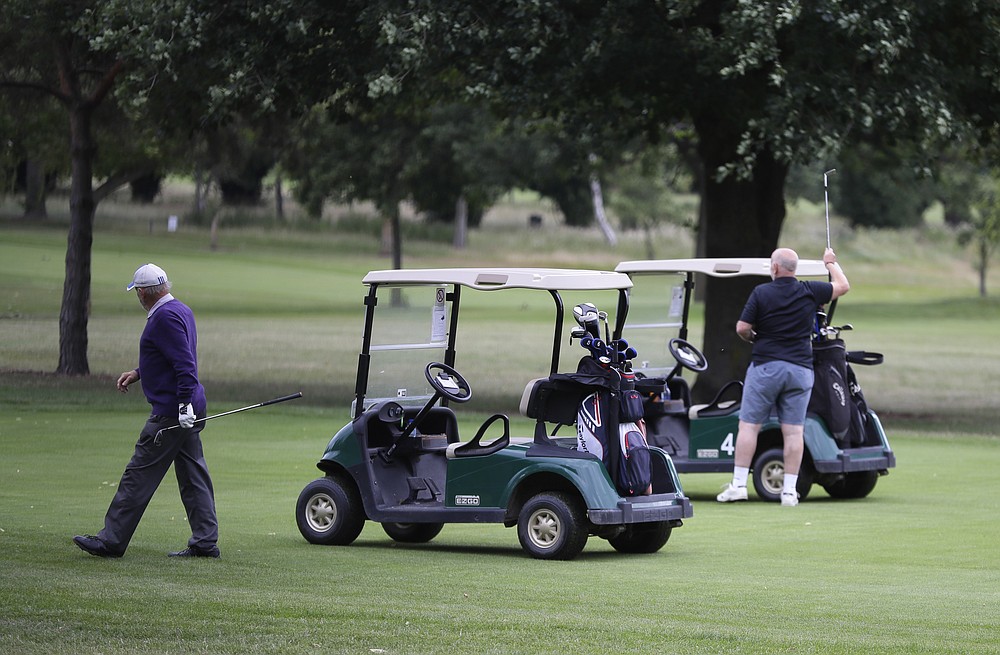 Golfers play on the golf course which would usually be used as a car park for Wimbledon tennis tournament visitors, in Wimbledon in London, Monday, June 29, 2020. The 2020 Wimbledon Tennis Championships, due to start Monday were cancelled due to the Coronavirus pandemic. (AP Photo/Kirsty Wigglesworth)