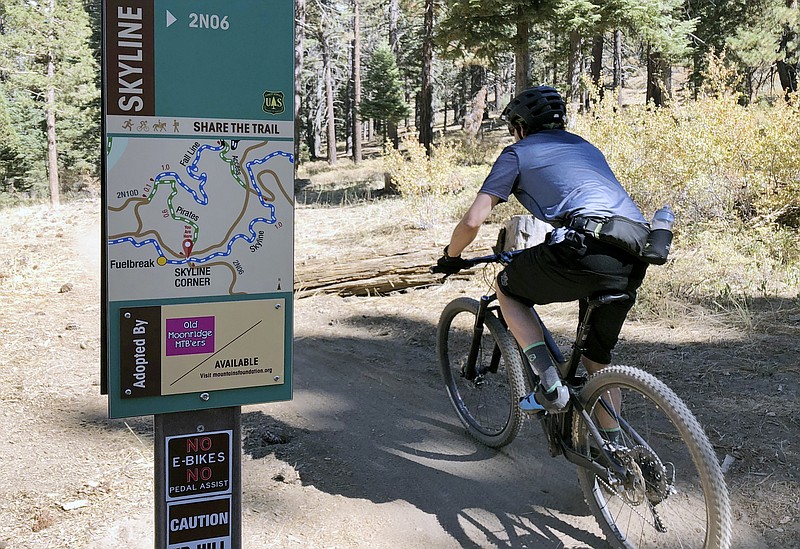 FILE -- In this photo taken Sept. 23, 2018, a mountain biker pedals past a No E-bikes sign in the San Bernardino National Forest near Big Bear Lake, Calif. (AP Photo/Brian Melley)

Votes were cast at the monthly commissioners’ meeting.

Recent changes to Arkansas law made certain classes of electrically assisted bicycles nonmotorized vehicles. This has resulted in some confusion about their use on Arkansas wildlife management areas that do not allow motorized vehicles, but do allow mountain bikes.

A proposal was developed to allow only class one electrically assisted bicycles to be used anywhere a traditional bicycle may be used on wildlife management areas.

The proposal was reviewed through public comment surveys, with 65% of respondents in favor of allowing the bicycles.

Some opposition arose about possible conflicts with the many user groups on wildlife management areas and concerns about interference with the quality of hunting on these public areas.

Commissioner Bobby Martin of Rogers also was in favor of the use of the bicycles on management areas and recognized the need to stay up to speed with the innovations in this growing industry.

“Multiple constituents are studying this,” Martin said. “And we need to move forward at some type of a measured pace on all of this, because we’re going to learn.”