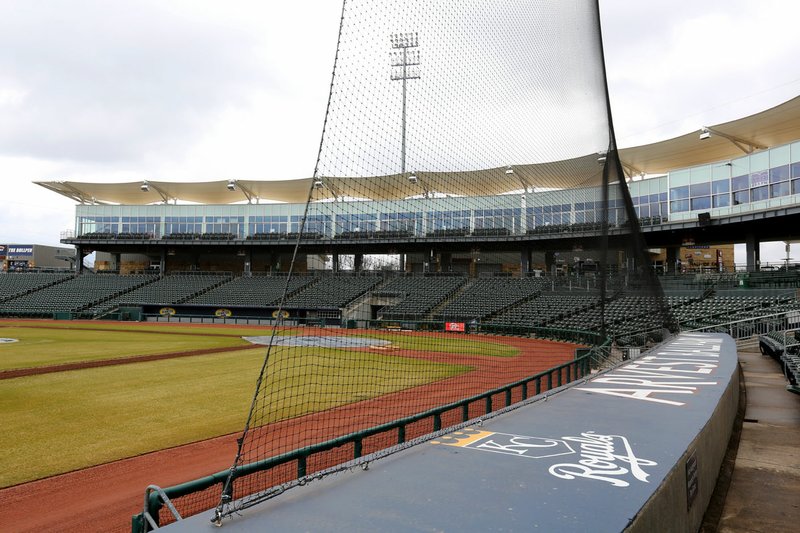 The Northwest Arkansas Naturals announced today plans to install additional protective netting at Arvest Ballpark in Springdale prior to the team's opening day April 16. Arvest Ballpark's protective netting will run from Sections 101-120 and maintain a minimum of 30 feet in height. Go to nwaonline.com/200227Daily/ and nwadg.com/photos for a photo gallery. (NWA Democrat-Gazette/David Gottschalk)

Minor League Baseball announced Tuesday afternoon that the 2020 season has been canceled because of the coronavirus pandemic.

The Northwest Arkansas Naturals and Arkansas Travelers, who are both members of the Class AA Texas League, are the two Arkansas minor league teams affected. The Naturals are the Class AA affiliate of the Kansas City Royals while the Travs are Seattle Mariners' affiliate.

This is the first time that the Naturals have had a season canceled since the franchise moved to Springdale in 2008 from Wichita, Kan.

“Although it may not be surprising given how our world has changed over the last few months, the official news that we will not have baseball at Arvest Ballpark this summer is heart-breaking,” Naturals Vice President and General Manager Justin Cole said in a news release. “Not being able to share with our great fans the excitement of Naturals baseball on those beautiful summer nights is going to leave an awful void in our entire organization.”

According to a news release from the Travs, this is the first time since 1962 that the franchise will not field a baseball team. This is only the eighth such occurrence since the team's founding in 1901 and only the third summer since 1915 that there will not be professional baseball in central Arkansas.

Both the Travs and Naturals announced that they will reach out to their ticketholders and sponsors on available options for their 2020 tickets and sponsorships.