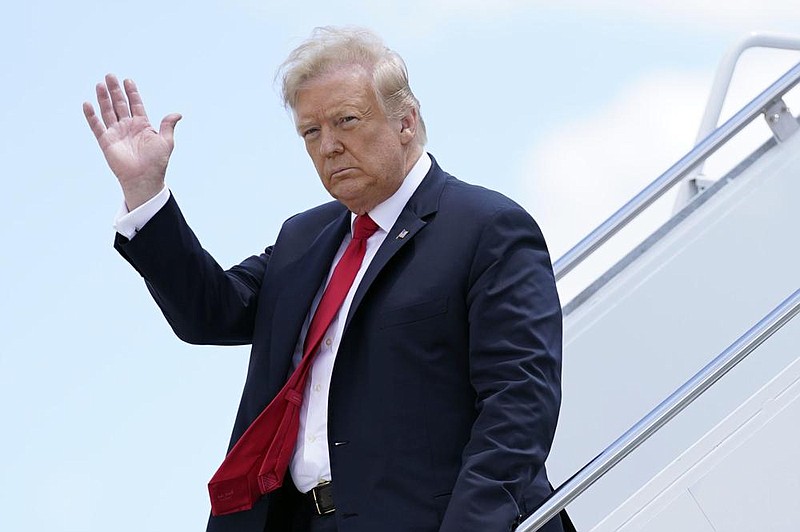 ADDS THAT IRNA IS STATE-RUN: FILE - In this Thursday, June 25, 2020 file photo, President Donald Trump waves as he arrives on Air Force One at Austin Straubel International Airport in Green Bay, Wis. Iran has issued an arrest warrant and asked Interpol for help in detaining President Donald Trump and dozens of others it believes carried out the drone strike that killed a top Iranian general in Baghdad early this year. That's according to a prosecutor in Tehran who was quoted by to state-run IRNA news agency on Monday, June 29, 2020. The prosecutor said Iran had asked Interpol to issue a â€œred noticeâ€ for Trump and over 30 others. (AP Photo/Evan Vucci, File)

Iran has issued an arrest warrant for President Donald Trump and 35 other people it says were involved in a drone strike that killed a top Iranian general in Baghdad this year and has asked for international help in detaining them, according to Iranian news reports.

Tehran's top prosecutor, Ali al-Qasimehr, said in the reports that those sought were involved in "directing the assassination" of Gen. Qassem Soleimani, who was killed with other Iranian and Iraqi officials at the Baghdad airport Jan. 3.

The comments came during a meeting with judicial figures, according to the semiofficial ISNA news agency, and al-Qasimehr added that Iran intended to pursue prosecution of Trump even after his presidential term ends.

No information was immediately available on the other people sought by Iran, but the ISNA report noted that "judicial authorities have ordered arrest warrants for them and a notice of red alert through the international police." It also said that a request for cooperation had been handed over to Interpol, an international police organization that includes both the United States and Iran as members.

Interpol said in an emailed statement that under its founding constitution, "it is strictly forbidden for the organization to undertake any intervention or activities of a political, military, religious or racial character."

"Therefore, if or when any such requests were to be sent to the General Secretariat, in accordance with the provisions of our constitution and rules, Interpol would not consider requests of this nature," the statement read, though it did not specifically address the Iranian request.

While the organization is responsible for coordinating international policing efforts, it does not have the authority to make arrests or force nations to arrest people on behalf of other governments.

The organization's "red alert" notices are not arrest warrants. They are sent out as a "request to law enforcement worldwide to locate and provisionally arrest a person pending extradition, surrender, or similar legal action," according to Interpol.

Soleimani, a powerful Iranian commander, was killed in a U.S. drone strike at the Baghdad airport in January, increasing tensions between the United States and Iran and nearly leading to war.

Sanam Vakil, a researcher on Iran at Chatham House, a London-based research institute, said it was unsurprising that Iran had chosen to take the largely symbolic step of calling for warrants and said that the killing of Soleimani had become part of Iran's "narrative of U.S. injustice."

"They haven't forgotten Jan. 3, and Soleimani is a really important figure within the conservative establishment, and really within the broader population," Vakil said. "So being able to push back symbolically using international agencies, there might be a subtle message there that this isn't going away."

And while the tensions between the two nations have been out of the headlines for months, they have continued to simmer. Much of the current animosity stems from the Iran nuclear deal, known as the Joint Comprehensive Plan of Action, that has all but collapsed in the two years since Trump abruptly announced the United States' withdrawal from the landmark agreement.

Since then, Iran has walked back several of its commitments under the initial agreement, though the other signatories have scrambled to save it. The United States in turn reintroduced sanctions and this month circulated a draft resolution to maintain a United Nations Security Council's arms embargo on Iran, set to expire in October.

[Video not showing up above? Click here to watch » https://www.youtube.com/watch?v=2_9h42oylbY]

"Against this backdrop there is probably growing pressure inside Iran to not drop the ball on responding to Soleimani's death," Vakil said. Despite retaliatory attacks against U.S. bases in Iraq shortly after the strike on the general, "Iran is still looking for some form of retribution," she said.

The strike was ordered by Trump, who said it was carried out to prevent an imminent attack on U.S. interests, but in the months since the attack, the United States has presented no evidence of this.

The Pentagon also defended the killing of Soleimani, who it said planned attacks on American diplomats and service members, including a deadly assault on an Iraqi military base in December that killed an American contractor.