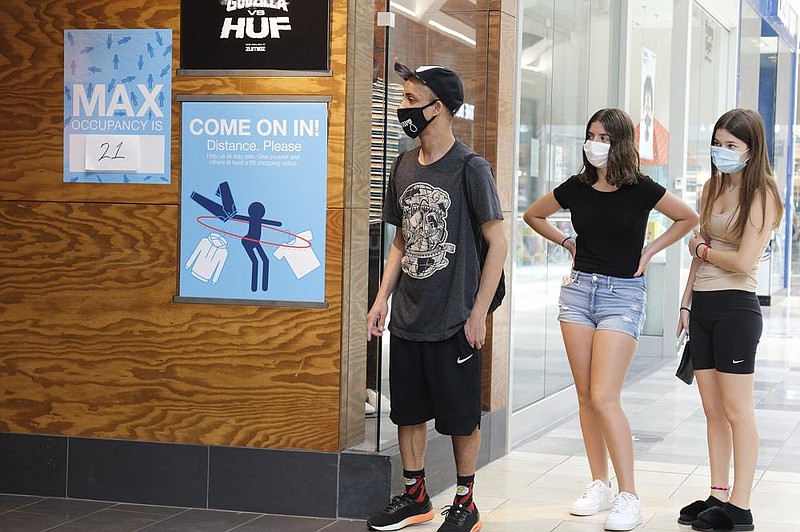 Customers wait in line Monday to enter a store at Garden State Plaza in Paramus, N.J. The state’s Monday after their covid-19 closure. (AP/Seth Wenig)

The city of Jacksonville, Fla., where President Donald Trump plans to accept the Republican nomination in August, ordered the wearing of face coverings Monday, joining the list of state and local governments reversing course to try to beat back a resurgence of the coronavirus.

Earlier this month, Trump moved most activities for the Republican National Convention from Charlotte, N.C., to Jacksonville after North Carolina Gov. Roy Cooper, a Democrat, wouldn't guarantee that the state would allow Trump to relax social distancing rules. 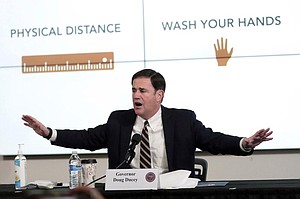 Less than a week after Jacksonville Mayor Lenny Curry said there would be no mask requirement, city officials announced that coverings must be worn in "situations where individuals cannot socially distance."

Florida Gov. Ron DeSantis, a Republican, has opposed a statewide mask requirement but said in response to Jacksonville's action that he will support local authorities who are doing what they think is appropriate.

Trump, who has not worn a mask publicly, told the Wall Street Journal that he believes some Americans wear them to signal their disapproval of him.

White House spokeswoman Kayleigh McEnany said Monday that Trump believes wearing a mask is a "personal choice" and that people should do "whatever your local jurisdiction requested you to do."

The Jacksonville order came on the same day that the head of the World Health Organization warned that the pandemic is "not even close to being over" and is accelerating.

"The worst is yet to come," said Tedros Adhanom Ghebreyesus. "With this kind of environment and condition, we fear the worst."

Health authorities have recorded more than 10 million confirmed infections and a half-million deaths globally, including 2.5 million cases and 126,000 deaths in the United States. The U.S. is seeing a surge in confirmed cases -- especially in the South and West -- with about 40,000 per day.

Experts say the actual numbers, both in the U.S. and globally, are probably far higher, in part because of testing limitations and the large number of people without symptoms.

Places such as Texas, Florida and California are backtracking, closing beaches and bars in some cases. Other states, such as hard-hit Arizona, are hitting pause on their efforts to reopen.

Arizona Gov. Doug Ducey ordered bars, nightclubs, gyms, movie theaters and water parks around the state to be closed for at least 30 days starting Monday night, as cases continued to spike in the state.

The Republican governor also ordered public schools to delay the start of classes at least until Aug. 17.

In Texas, a group of bar owners filed a lawsuit on Monday to try to overturn Republican Gov. Greg Abbott's order closing their businesses. They contend that Abbott doesn't have the authority, and they complained that other businesses, such as nail salons and tattoo studios, remain open.

"Gov. Abbott continues to act like a king," said Jared Woodfill, attorney for the bar owners. "Abbott is unilaterally destroying our economy and trampling on our constitutional rights."

But New York Gov. Andrew Cuomo said Abbott is on the right path, and he added that Trump should order the wearing of masks.

In a speech Monday, Senate Majority Leader Mitch McConnell, R-Ky., joined those trying to set an example for a wary population that's deeply divided over masks.

"We must have no stigma -- none -- about wearing masks when we leave our homes," McConnell said in the Senate.

McConnell counted mask-wearing as one "common sense" measure ordinary Americans could take during this time, before there is a vaccine.

"We cannot go right back to normal. We need new routines," he said.

Rep. James Clyburn, D-S.C., the chairman of the select committee on the coronavirus, said Monday that he would no longer call on lawmakers to speak during committee hearings unless they follow the physician's guidance to wear a mask.

"My Republican colleagues' refusal to wear masks is perplexing because you have asked repeatedly to hold in-person hearings, and you assured me that this could be done safely," Clyburn wrote in a letter to colleagues. "I told you that I would work in good faith to hold in-person hearings if we could do so safely and consistent with the Attending Physician's guidelines."

To reduce the spread of the coronavirus, the Centers for Disease Control and Prevention recommends that people "wear cloth face coverings in public settings when around people outside of their household," especially in situations when it is hard to stay more than 6 feet apart.

Elsewhere around the world, Britain reimposed lockdown restrictions on the city of Leicester after a spike in cases, ordering the closure of schools along with stores that do not sell essential goods.

India set another record with a one-day total of 20,000 newly confirmed infections. Several Indian states have reimposed partial or full lockdowns after the total number of cases jumped by nearly 100,000 in one week, to about 548,000.

In China, nearly 8.3 million out of about 21 million Beijing residents have undergone testing in recent weeks after an outbreak centered on a wholesale market. The country reported just 12 new cases Monday, including seven in Beijing.

Over the weekend, China put 400,000 residents of Hebei province's Anxin county under lockdown after at least a dozen coronavirus cases associated with the Beijing outbreak were reported there.

South Korean authorities reported 47 new cases as they struggled to curb outbreaks that have spread from Seoul to other regions. Officials said they are preparing to impose stronger social distancing measures -- including banning gatherings of more than 10 people, shutting schools and halting professional sports -- if the daily increase in infections doubles more than twice in a week.

In the Philippines, a Southeast Asian coronavirus hot spot with more than 35,000 confirmed infections, local officials came under fire for allowing a street parade and dance during a weekend religious festival to honor St. John the Baptist despite prohibitions against public gatherings.

The European Union, meanwhile, is preparing a list of 15 countries whose citizens will be allowed to visit the bloc beginning Wednesday, Spanish Foreign Minister Arancha Gonzalez Laya told the Cadena SER radio network. Because of the resurgence in the U.S., America may not be on that list.

"This is not an exercise to be nice or unfriendly to other countries. This is an exercise of self-responsibility," she said. 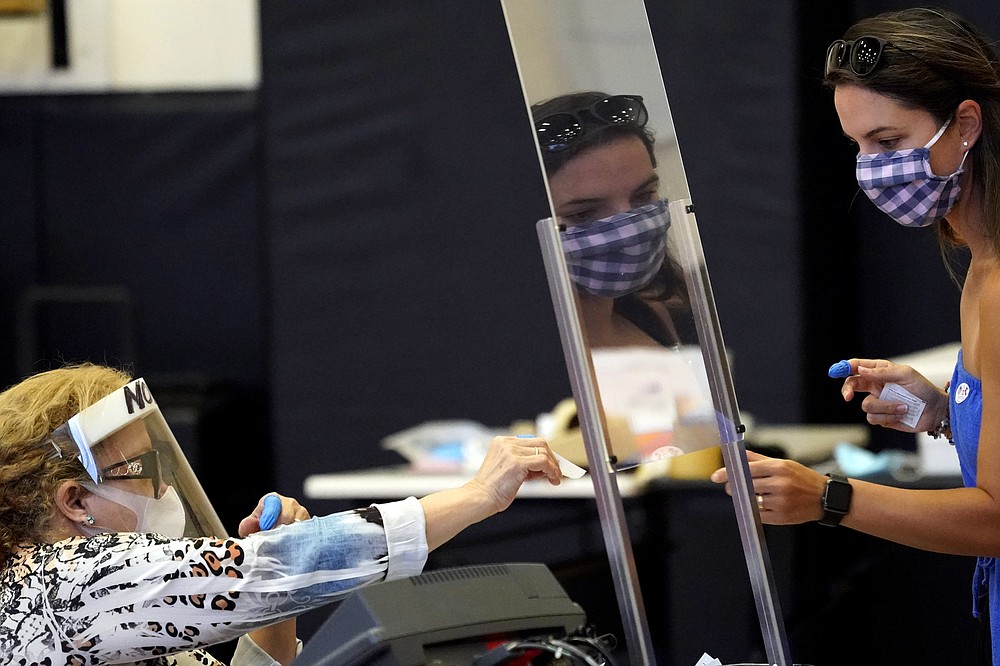 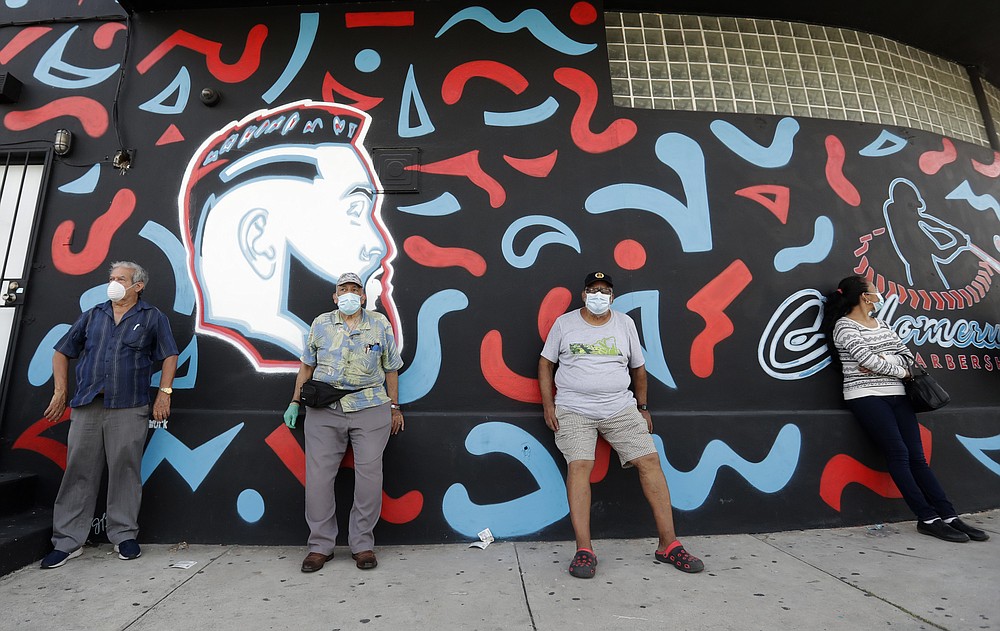 People, social distancing and wearing masks to prevent the spread of the new coronavirus, wait in line at a mask distribution event, Friday, June 26, 2020, in a COVID-19 hotspot of the Little Havana neighborhood of Miami. Florida banned alcohol consumption at its bars Friday as its daily confirmed coronavirus cases neared 9,000, a new record that is almost double the previous mark set just two days ago. (AP Photo/Wilfredo Lee) 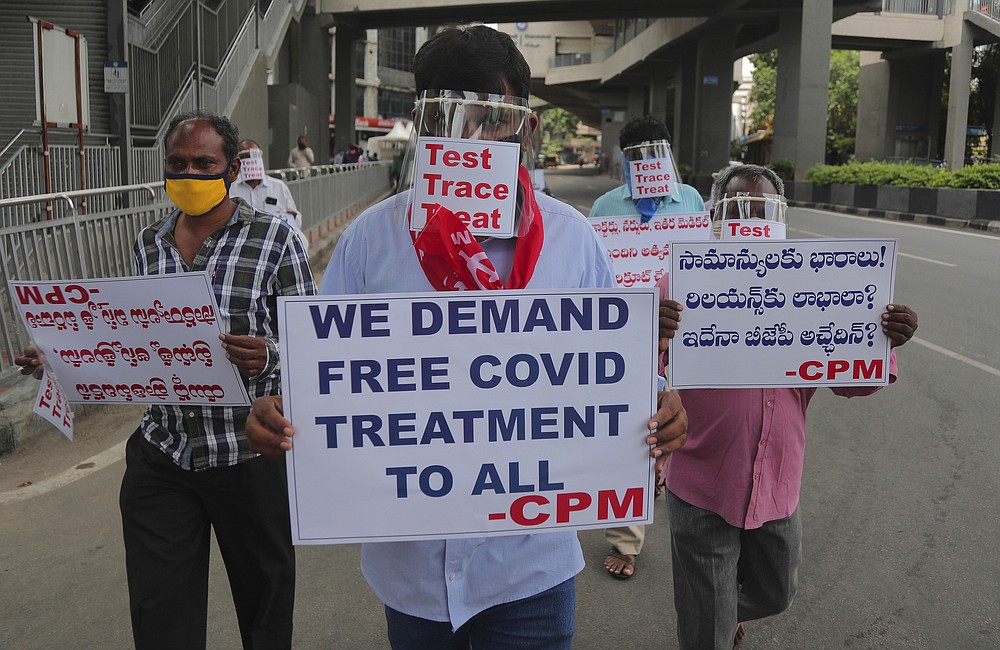 Activists of Communist Party of India Marxist wearing face shields and hold placards during a protest asking the state government to increase testing and free treatment for all COVID-19 patients in Hyderabad, India, Monday, June 29, 2020. Governments are stepping up testing and warily considering their next moves as the number of newly confirmed coronavirus cases surges in many countries. India reported more than 20,000 new infections on Monday. (AP Photo/Mahesh Kumar A.) 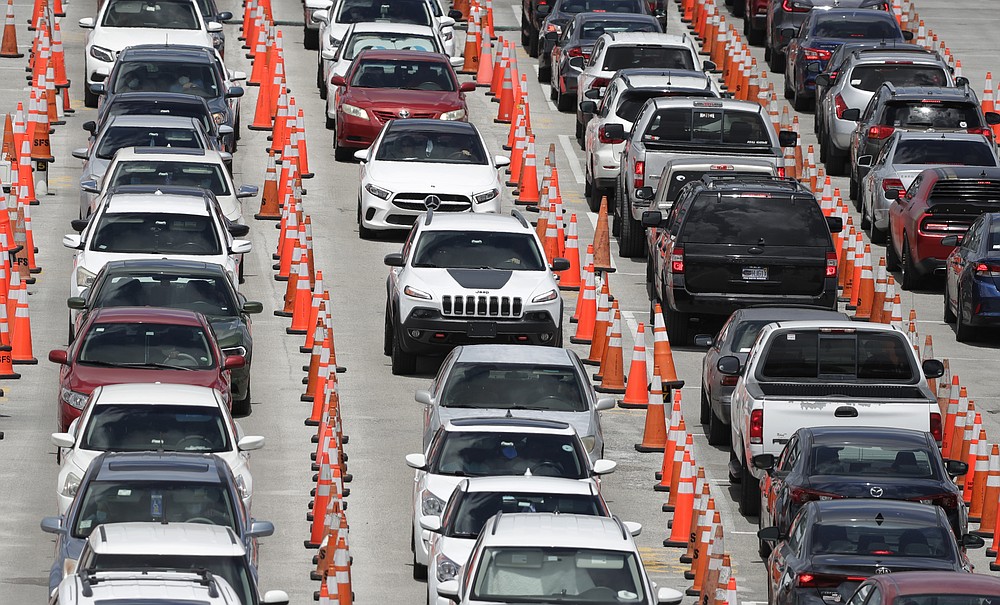 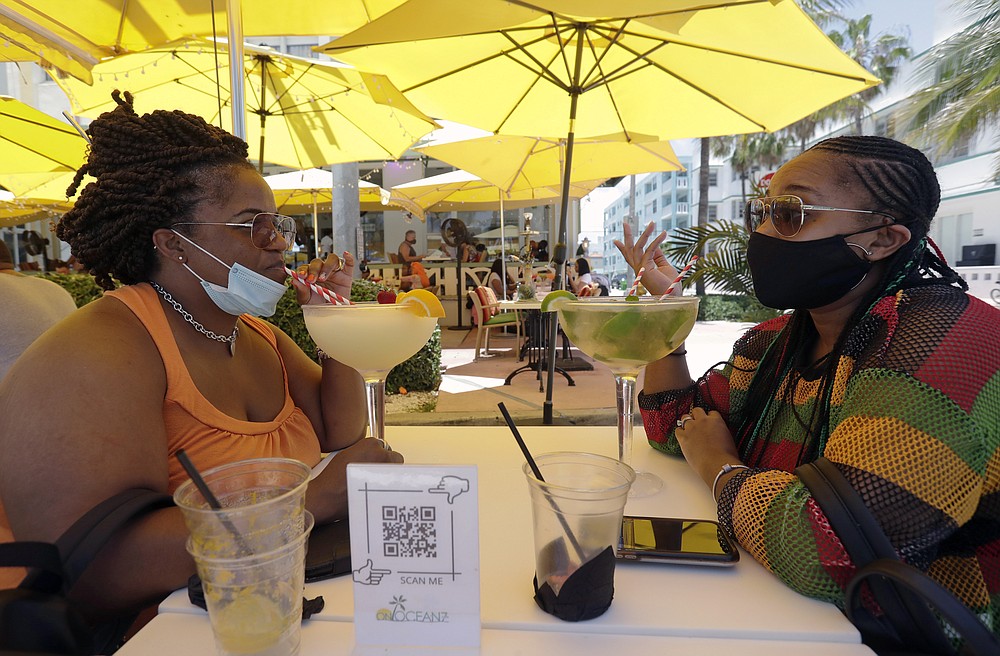 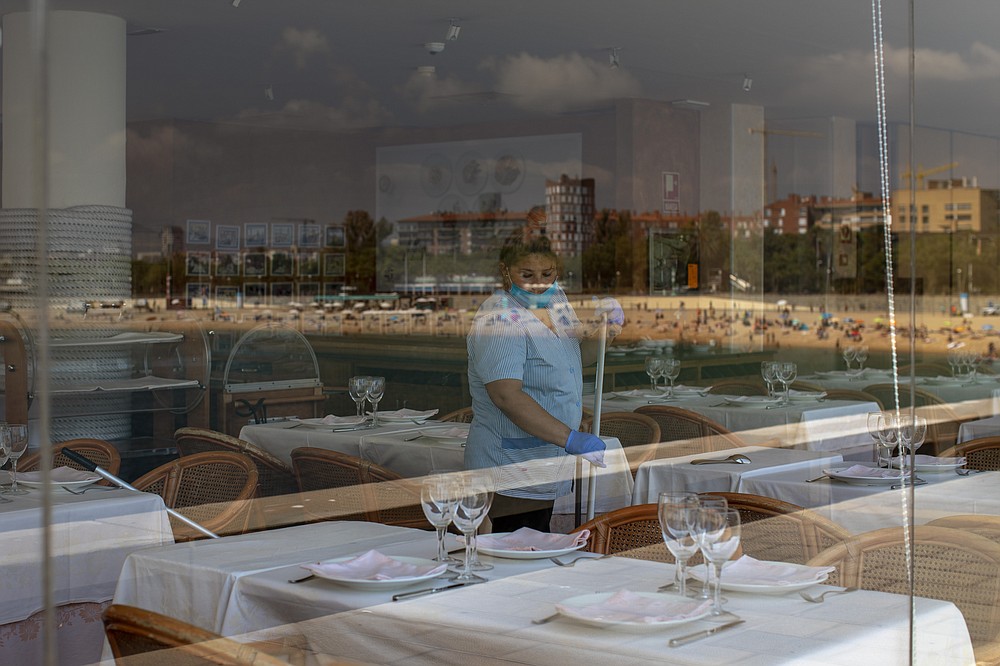 A woman cleans a restaurant prior to the opening, near the beach which is reflected in the glass, in Barcelona, Spain, Monday, June 29, 2020. Spain's foreign minister says that the European Union is putting together a list of 15 countries that are not bloc members and whose nationals will be allowed to visit from Wednesday. (AP Photo/Emilio Morenatti) 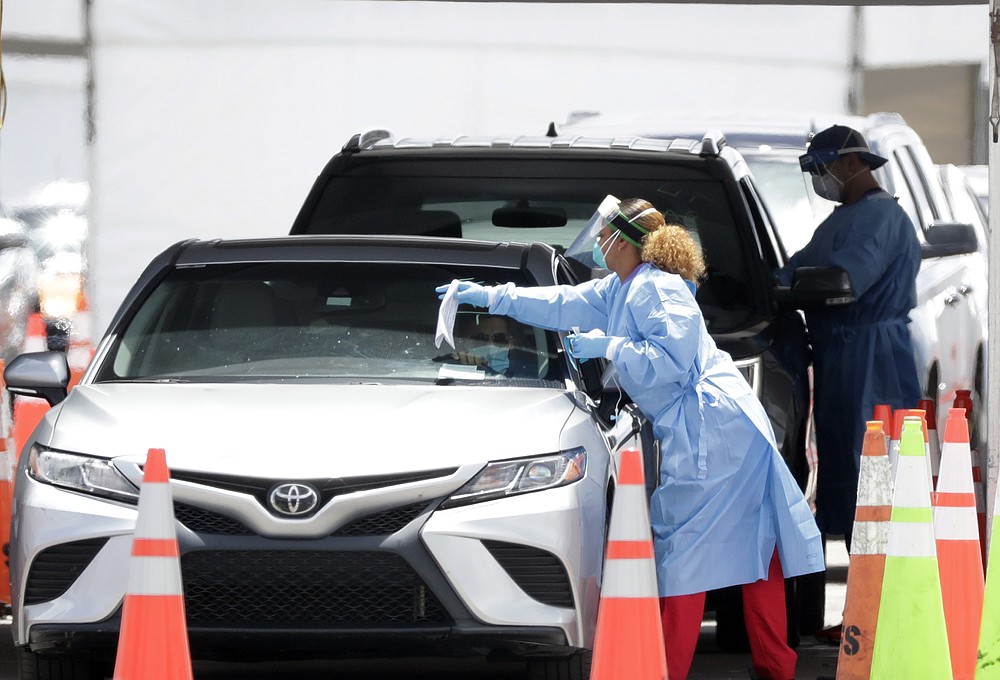 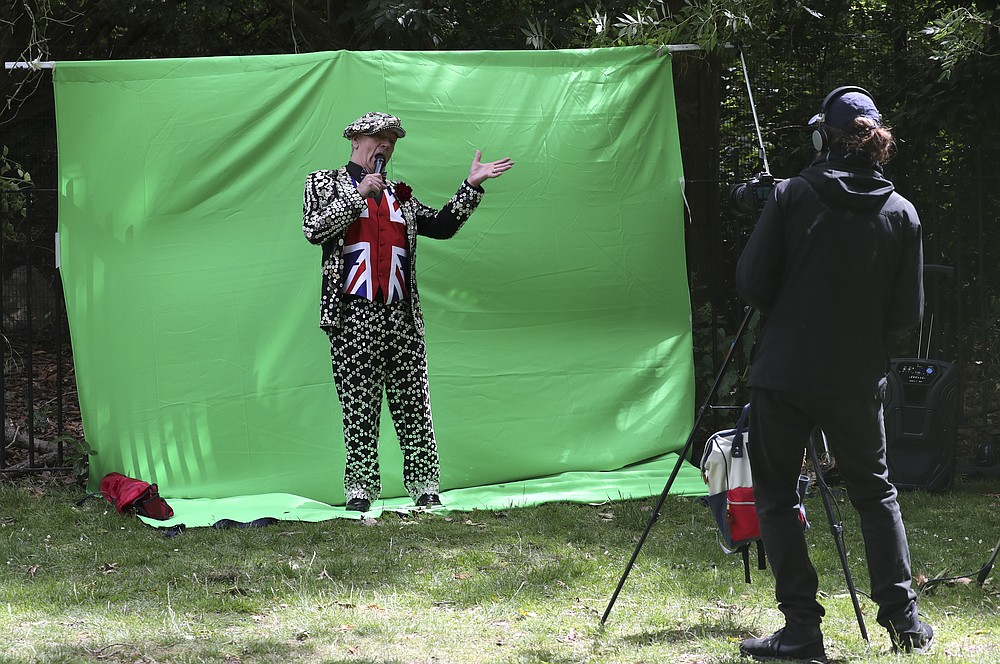 Entertainer Mickie Driver performs in front of a green screen background at a park in London Monday June 29, 2020 as he is filmed making a promotional video in support of buskers and street musicians whose livelihood was affected by the coronavirus lockdown. (AP Photo/Tony Hicks) 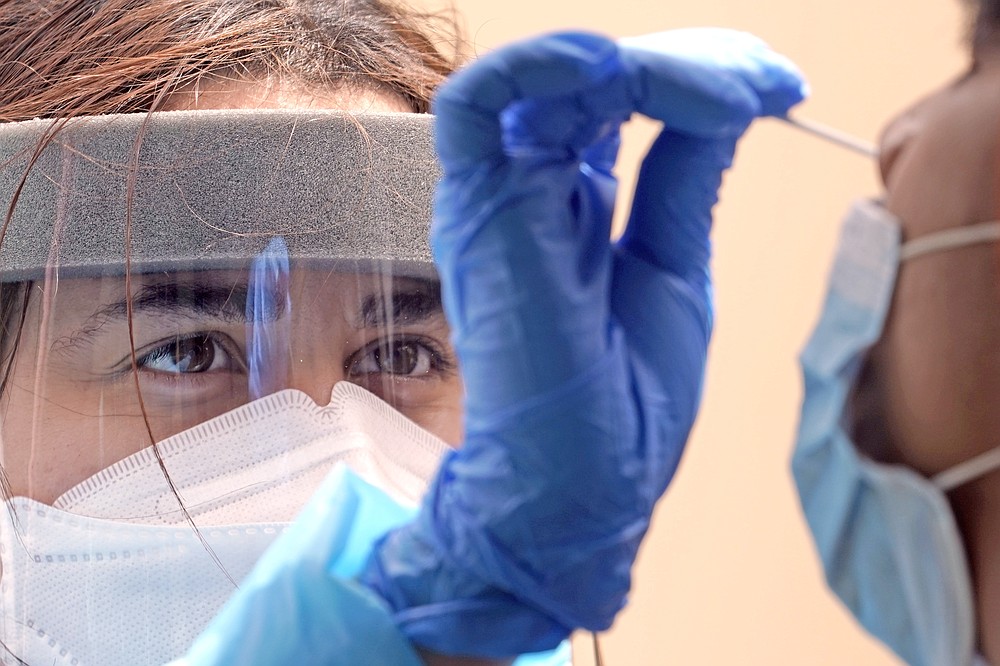 Medical student Kimberly Olivares, left, takes a sample from a patient at a free COVID-19 testing site provided by United Memorial Medical Center, Sunday, June 28, 2020, at the Mexican Consulate, in Houston. Confirmed cases of the coronavirus in Texas continue to surge. On Friday, Texas Gov. Greg Abbott shut down bars again and scaled back restaurant dining as cases climbed to record levels after the state embarked on one of America's fastest reopenings. (AP Photo/David J. Phillip)