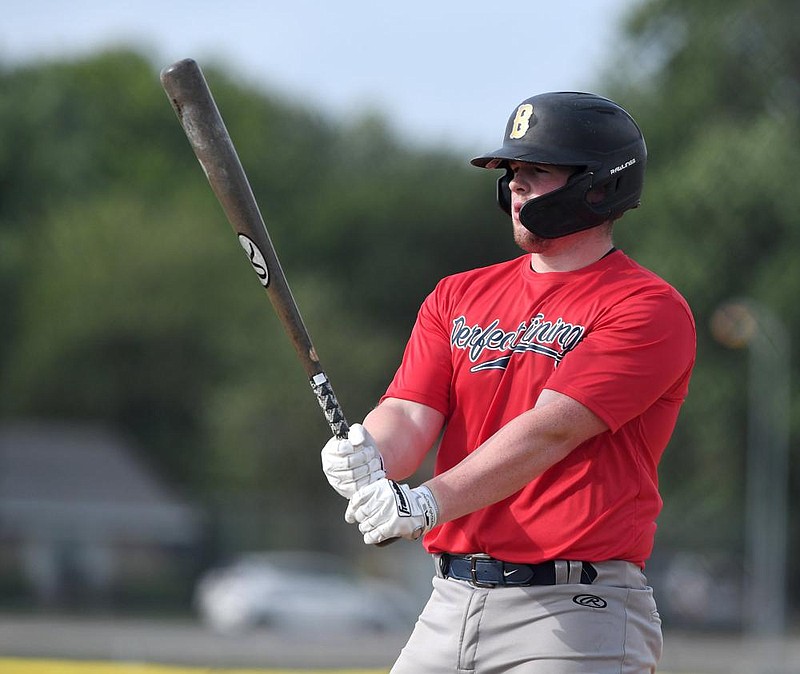 SPRINGDALE — Sam Golden decided quickly that he wasn’t going to be intimidated by the Division I stars and future professionals playing in the Perfect Timing College Baseball League.

Golden has been one of the surprise players in the league after having his senior season at Bentonville cut short by covid-19. Golden started at catcher and batted third Monday when PT Red lost 6-3 to PT Cardinal at Tyson Park.

Golden went 0 for 3 as PT Cardinal rallied for five runs in the top of the seventh to win the game. Still, PT Red Coach Phil Cebuhar has watched Golden develop from a young age and he’s excited about his future.

“Sam has a really good bat,” Cebuhar said. “He’s been developing over the years since he was a 14-year-old, and he’s been growing. He’s also very good behind the plate. He has a really good arm. I’m very excited to see how his career progresses.”

While Golden has plenty of talent, he said his mental approach to the game has helped him play at a high level against older and more experienced players.

Players and coaches in the Perfect Timing College League have noticed Golden’s work at the plate and at catcher for PT Red.

The late comeback by PT Cardinal ruined a standout performance by Wicks of PT Red. The left-hander for Kansas State struck out 10 and allowed 1 unearned run in 4 innings.

“I’ve caught [Wicks] multiple times, and he’s a stud,” Golden said. “He’s got a good bite on his curve ball and his cutter spins real well. He’s a [pro] prospect. I wouldn’t be surprised to see him in the big leagues a few years from now. It’s an honor to play with him.”

Golden possibly could’ve been drafted with a good senior year at Bentonville, but his chances was greatly reduced when spring sports were canceled after only a few games because of covid-19. The Major League Draft was then reduced to five rounds.

“I didn’t have any strong connection to Central Missouri until JT Baker, the owner of Perfect Timing, got me in touch with them,” Golden said. “They came and watched me play and I really liked the coaches and facilities when I went up there for a visit.”

Although nothing in sports is certain with covid-19 raging, Golden said he expects to report in August to Central Missouri to begin his freshman year.

“I plan to hit offseason workouts hard and, hopefully, compete for a starting spot once the season starts.”