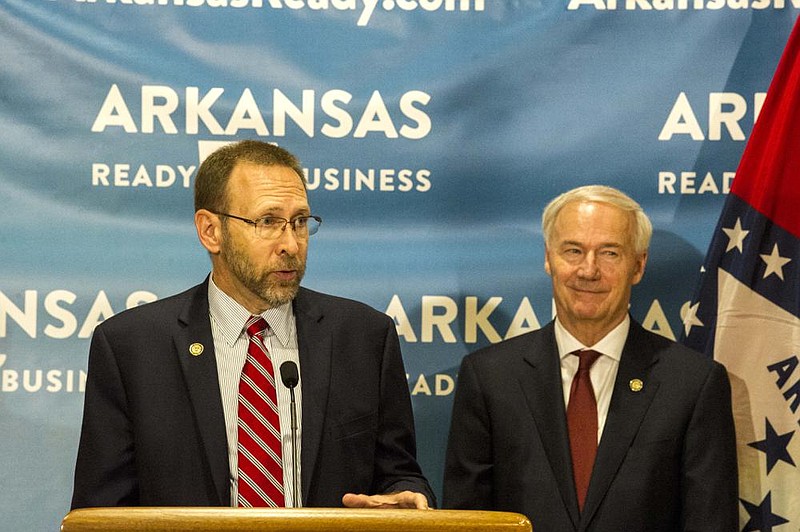 Governor Hutchinson and Dr. Nathaniel Smith, Secretary of the Department of Health, address the media as they deliver an update on Arkansas' response to COVID-19 on Monday, June 29, 2020 (Arkansas Democrat-Gazette / Stephen Swofford) - Photo by Stephen Swofford

Arkansas topped 20,000 confirmed cases of the coronavirus on Monday, with one day to go to close out a month that saw both cases and testing double in the state.

After the first coronavirus patient was identified in Pine Bluff on March 11, it took nearly three months -- until June 9 -- for the state to reach 10,000 cases. That number then doubled in less than three weeks, reaching 20,257 on Monday.

There have been 265 deaths attributed to the virus, an increase of one since Sunday.

The speed at which new cases have been reported in part reflects rapid increases in testing -- more than half of the total number of covid-19 tests performed in Arkansas came in June -- but state officials have also acknowledged that the case numbers grew because of more infections, as evidenced by increased hospitalizations and deaths.

Since March, 302,536 tests had been performed as of Monday -- about 1 for every 10 Arkansans -- with 282,279 reporting negative results. Part of the increased testing goal was to perform one on every person in long-term care facilities, which reopen for visitors starting Wednesday under certain conditions.

Nationwide, the epicenters of the pandemic have shifted to the South and West Coast. According to an analysis by The New York Times, three of the 10 counties with the highest numbers of recent cases per capita are in Arkansas: Yell, Sevier and Hot Spring counties.

[Video not showing up above? Click here to watch » https://www.youtube.com/watch?v=LNFMLST7Zqc]

Gov. Asa Hutchinson expressed hope Monday at his coronavirus news conference that infections were beginning to subside in the northwest region of the state hit hardest by the virus, while his health secretary, Nate Smith, warned that new cases were on the rise in the Little Rock metropolitan area.

"Although we haven't had an explosive increase in cases, we're going to have to be very vigilant in this central part of the state because that's our most densely populated portion of the state," Smith said, adding that there was no identified cause for the increase.

Pulaski County reported 56 new cases of the virus on Monday, trailing only Washington County, which reported an increase of 92 cases. 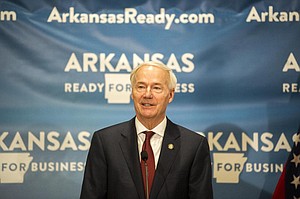 Photo by Stephen Swofford
Gov. Asa Hutchinson warned Monday that though the number of newly reported coronavirus cases has fallen in successive days, lax behavior could cause a new spike. (Arkansas Democrat-Gazette/Stephen Swofford)

Overall, the Arkansas Department of Health reported 439 new cases of the virus over the previous 24 hours. Hospitalizations increased by seven, to 300. Sixty-three of the patients were on ventilators.

In Washington and Benton counties, people with the coronavirus made up 93 of 622 patients in hospitals on Monday, according to a report by the hospitals.

While the number of newly reported cases has fallen in successive days, Hutchinson warned that lax behavior could cause a new spike.

Hutchinson chided some Arkansans for what he described as poor behavior documented on social media over the weekend, where images were posted of dozens of unmasked people gathering at a bar and along a river in Northwest Arkansas.

"We don't know what this last weekend will bring" in terms of new cases, Hutchinson said. "Not everyone behaved well over the weekend."

The governor said he would be delivering "words of encouragement" ahead of the upcoming Fourth of July holiday, and that Alcoholic Beverage Control officers would be assisting the Health Department in enforcing guidelines over the weekend.

Smith said contract tracers working for the Health Department "do ask some questions" of those who test positive about whether they have been following health guidelines. But for the most part, Smith said, tracers work to identify who else may have been exposed rather than assigning blame.

"We don't have any known positives related to that, but we have people who were potentially exposed and so we've sent them home and quarantined them," Smith said.

Smith did not say who the vendor was, though Health Department spokeswoman Meg Mirivel said the employee for the vendor was on the campus last Wednesday.

Since the beginning of the pandemic, Mirivel said, 10 Health Department employees have tested positive for the virus at the department's locations around the state.

Smith said there has been no evidence of any employees contracting the virus while at work at the Health Department.

CASES AROUND THE STATE

Among workers in the poultry industry, the number of cases increased by 156, to 2,611, from Thursday evening to Sunday night, according to Health Department reports.

The number of those cases that were active, however, fell by 45 as 201 workers were newly classified as having recovered.

TMC Logistics, a trucking company with a terminal in Bentonville, was added to a Health Department report listing non-poultry businesses with at least five employees who had active infections as of Sunday night.

According to the report, five Arkansas workers at the company have tested positive.

A Health Department report also listed 11 cases among residents at Little Creek Behavioral Health, a residential treatment facility for children in Conway. Three employees at the facility were also listed as having tested positive.

The report listed five cases among residents at Souls Harbor NWA in Rogers, which houses men recovering from substance abuse, and three among residents at Safe Harbor of Little Rock, which describes itself on its website as a "faith-based recovery support services program."

At the Ouachita River Unit in Malvern, 368 inmates were listed in the report as having tested positive, up from 367 on Friday. The number of cases among workers at the prison rose by five, to 24.

From Friday to Monday, the number of cases among residents of nursing homes and assisted living facilities increased by 85, to 824, according to Health Department reports.

Seventeen of the cases were at Mitchell's Nursing Home in Danville, one of 11 long-term care facilities added to a report listing those where at least one worker or resident has tested positive.

The number of deaths from the virus among residents of the facilities increased by seven, to 99.